Andrew Heckler’s “Burden” won the Audience Award at Sundance in January of 2018, and then languished in distribution purgatory for over two years. It’s easy to see why. "Burden" is a tough sell, a film with a logline that makes most people roll their eyes: a KKK member discovers the error of his ways. Who needs another story about a reprehensible racist discovering that racism is something he was taught, and not something that we’re born believing? And it’s a film that falls victim to a few other tropes as well, including black characters who seem designed merely to help the white protagonist on his journey to discovery and the edge of what’s often called “poverty porn,” in which less well-off people are used in a way that feels exploitative more than genuine. And yet there are elements here, most of them embedded in another great physical performance from Garrett Hedlund, that keep “Burden” from completely sinking into the Carolina mud.

Hedlund plays Mike Burden, a young man in a small South Carolina town who has been raised in a culture of hate by a leader of the KKK named Tom Griffin (Tom Wilkinson, giving a nuanced portrayal of how much evil can look like the average guy next door). Griffin and his gang of easily manipulated yes-boys are opening a Redneck KKK Museum in an old theater when “Burden” starts, which sends the community into an uproar and turns up the fire under always-simmering racial tensions. Reverend Kennedy (Forest Whitaker) unites his congregation against the move, but preaches compassion and understanding, even for your enemies.

While this is happening across town, a love story brews between Mike and a single mother named Judy (Andrea Riseborough), who also happens to be friends with one of Burden’s childhood pals, Clarence (Usher Raymond). Judy is startled when she learns that Mike is involved with the KKK, and Riseborough is very good in these early scenes of confusion. She conveys a lot of conflict without much melodrama, capturing the difficult decision of a woman who finally finds what she thinks is a decent, supportive man, only to learn he’s a virulent racist. And she starts to chip away at his beliefs, challenging Tom’s teachings, until the dam breaks.

In a series of events that apparently really happened, Mike ends up in the Reverend’s home, where he’s finally taught compassion and empathy for everyone. In these scenes, “Burden” goes farthest astray because Kennedy and his family become almost entirely plot devices for Burden’s arc. Imagine the story told in reverse—from, say, the perspective of Kennedy’s son, who has to balance his trust in his father and God’s teachings against a man in his house who he knows is a monster. How far would his compassion go? This is barely explored in this cut of “Burden” (which is a little shorter than what played Sundance), and the section in which Mike and Judy go from homeless to living under the roof of a man that Burden almost killed earlier in the film feels rushed and thin.

To be honest, a lot of “Burden” feels thin. Heckler tackles a lot in his debut, and his inexperience shows in how many of the supporting characters simply don’t register, particularly the non-white ones. Even Whitaker can’t find a way to make his Reverend as memorable as the brief snippet that ends the film of the man himself actually preaching. The sense that a lot of these characters have been reduced to their narrative purpose destroys the world that “Burden” needed to create to work.

And yet there’s something there in Hedlund’s performance that almost makes me want to recommend the film. He’s one of those guys who’s always moving, a bit uncomfortable standing still or making direct eye contact (which adds to the power of the final shot). Hedlund completely understands the kind of person so uncertain in his own skin that he will go along with people as evil as Tom Griffin just to find some sort of peace. And Riseborough matches him beat for beat. She can do pretty much anything. There’s a great film in the minor beats between Mike and Judy and the choices made by the great actors playing them—I just wish I believed more in everything around them. 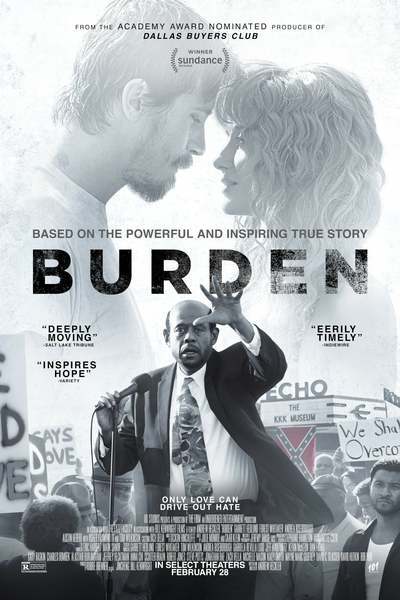 Rated R for disturbing violent content, and language throughout including racial epithets.