"Bullitt County" has more talent than sense. This thriller from writer/director David McCracken about four friends getting into a heap of trouble in the Kentucky mountains circa 1977 owes a huge and unabashed debt to the Coen brothers, to the point where the movie's PR material felt emboldened to compare itself to "No Country for Old Men." And there are, in fact, several moments when you can't help but think of the brothers' mordantly funny kidnapping pictures, especially "Fargo" and their debut, "Blood Simple." The problem is the script, which isn't up to the level of the filmmaking—much less the acting, by a crackling ensemble of new and established players who deserve to become better known as a result of their work here.

At the center are four friends who decide to visit their favorite distilleries on the bluegrass bourbon trail, retracing a course they embarked on ten years earlier. While stopping by a personally significant distillery (one that's since been converted into a beer place, alas) they hear of a stash of bootlegging loot that's supposedly buried in the Bullitt County woods, and decide to go find it. And as you can imagine, things don't go as planned.

Intertwined with their treasure hunt is a personal story about guilt, sin and repression. The film's main character Gordie (Mike C. Nelson), a Vietnam veteran, is afflicted by PTSD—not from his military experience (he got sent home before he saw action), but from something horrible that happened to him stateside a decade ago, in the company of the trio he's traveling with now: Robin (Jenni Melear), a guitar-strumming wiseass; her even bigger wiseass of a boyfriend Keaton (David McCracken), who always seems to say and do the worst thing at the worst time; and Wayne (Napoleon Ryan), a soft-spoken Englishman who mostly hovers on the periphery and interjects commentary on Gordie's choices, and whose look and body language faintly recall a young Art Garfunkel.

Along the way, the group meets eccentric locals, played by character actors who make their roles pop even when they have a couple of scenes or a handful of lines. The performers go the extra kilometer to make every character's choice feel spontaneous and real, even when they're just doing whatever the movie needs them to do to set up the next big moment. The most impressive are Richard Riehle and Dorothy Lyman as an older married couple who offer hospitality to the foursome. They have John Ford faces.

McCracken is a sharp director of uncomfortable conversations and emotional assaults as well as beatings and killings. He, his cinematographer Sean McDaniel, and his editor Kevin Del Colle always try to present things in a way that's elegant and surprising but not pointlessly showy, in the manner of a classic Hollywood movie from a time when every camera move, even in bad films, was meaningful, or tried to be. My favorite occurs when violence erupts in a small room, and the movie holds on a long closeup of a shocked, blood-spattered character in the foreground while the kitchen window in the background forms a frame-within-a-frame that other major characters gather within.

Unfortunately, this is a textbook case of an otherwise assured movie outsmarting itself. The details of Gordie's trauma are doled out gradually, by way of flashbacks that don't fill in the whole story until the final scene, at which point we're treated to a twist that would be shocking if we hadn't seen it done over and over during the last couple of decades. The movie takes a story that could have been horrifying and sorrowful—part treasure hunting thriller, part lament for moral cowardice, in the vein of a great Coen brothers thriller, or a backwoods tragedy like "Deliverance" or "A Simple Plan"—and makes it seem shallow and gimmicky, by piling on commercial screenwriting cliches.

It's a shame, because McCracken has real directorial chops, and his cast does fine-grained detail work—Nelson especially. His dyspeptic, volatile, wounded performance somehow channels both Paul Giamatti and the young Jack Nicholson. Even when the movie defeats itself, he's in there turning a bundle of contrived storytelling cues into a witty, grotesque, self-pitying, scary man. Gordie's story would have held our attention if we'd been privy to the source of his anguish from the start. The deeper you travel into the maze of "Bullitt County," the more you may wish it had settled for being a straightforward character drama with suspense trappings, instead of a puzzle-box movie. The cast and crew have an American classic in them, but this ain't it. 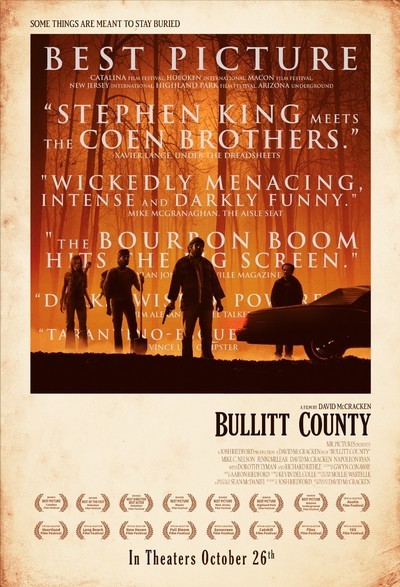 Dorothy Lyman as The Mrs.

Richard Riehle as The Mr.