Late in "Broadway Idiot," the documentary about the Broadway musical version of Green Day's "American Idiot," an onscreen newspaper review's headline describes the show as "a surly, cynical grandchild of 'Hair.'" The documentary cites it as an example of negative criticism, which was probably the reviewer's intention. I saw it as a positive comparison, a "like grandpa, like grandson" take on the similarities between the two musicals. Surly and cynical are common characteristics when you're young, and the Broadway incarnations of "Hair" and "American Idiot" spoke to the youth of their respective generations with songs about sex, drugs and war. Both were filled with language and ideas that curled the elders' hair, and featured hard-driving rock songs, personal narratives, and at least one hauntingly beautiful, bittersweet lament. I imagine "Hair" was subjected to the same "get off my lawn!"-style generation gap reviews when it opened in 1968.

While "Hair" opened the door for rock musicals like "American Idiot," the closer companion to Green Day's album is The Who's "Tommy," which was also transformed into a Broadway musical. Like Pete Townshend's pinball wizard tale, "American Idiot" is a narrative that tells one man's story through its songs. Its tale of the "Jesus of Suburbia" is lyrically constructed by Green Day frontman Billie Joe Armstrong who, as "Broadway Idiot" opens, is about to take the stage to play a character he sings about every night in concert.

"Broadway Idiot" gives Armstrong a major role, but keeps its focus on the people involved with creating the Broadway show. Stepping back from Armstrong's debut, which will be seen in detail much later, director Doug Hamilton introduces the main characters of his film. He starts with Michael Mayer, the director of the "American Idiot" musical. Mayer adapts "American Idiot" after winning the Tony for "Spring Awakening," a freaky-as-hell musical adaptation of a sexually explicit, controversial 1891 German play. Mayer teams with Tom Kitt, who arranges songs from both "American Idiot" and Green Day's follow-up album "21st Century Breakdown." Both speak in detail about the process throughout "Broadway Idiot," with Mayer focusing on performances and the book (which he cowrote with Armstrong) and Kitt explaining the reasons for his arrangement choices.

With Green Day on tour promoting the very album he is adapting, Mayer and his cohorts push forward while waiting for a break in the tour schedule. When the band arrives to discuss signing off on the show, Hamilton creates suspense by showing footage of Armstrong listening to a different arrangement of "Last Night On Earth" than the one he wrote and sang. Editor Rob Tinworth cuts between the nervous singers, the band, Mayer and Kitt. "Broadway Idiot" shows the rarely captured moment when a songwriter hears his or her song through the conduit of another interpreter. Armstrong's verdict is profanely positive ("That was f#@king sick!" he exclaims), and the documentary moves on to the next aspect of show building.

Scene designer Christine Jones discusses her Tony-winning creations for "American Idiot," which consist of bill-covered walls, video monitors and a very unusual prop masquerading as a bus. She leaves little notes in each area of her set to put the actors in a particular location-based mindset. As her team tests the set, the actors are shown reacting to their new onstage home. The footage used in "Broadway Idiot" gives the impression that the camera is always in the right place to capture moments of genuine surprise on the faces of everyone involved. There are some emotionally stunning and candid moments in this documentary, and they unfold without seeming forced or staged.

When the camera isn't observing the folks behind the curtain, "Broadway Idiot" points it at the actors out front. "These characters are a lot like us," says Rebecca Naomi Jones, a powerhouse singer assaying the role of the album's oft-mentioned female character, Whatsername. She's joined by John Gallagher Jr., who plays Johnny, the lead character, and Tony Vincent, whose St. Jimmy looks as advertised by Armstrong's vocal on Jimmy's eponymous album track. St. Jimmy is the role Armstrong prepares to play at the beginning of "Broadway Idiot," and until he does, we're treated to a satisfying chunk of scenes where the cast sing and practice their numbers. The musical moments include Green Day's Grammy show performance with the cast, which occurs on the same day everyone finds out their Berkeley-staged tryout is headed for Broadway.

Armstrong remains present throughout "Broadway Idiot," and while he's never seen as anything less than supportive, it must have been nerve-wracking for the show creators trying to elevate and perfect Green Day's work on a musical's stage. "Some of these arrangements are better than ours," Armstrong says at one point, putting Mayer and Kitt at ease. Kitt makes parallels between the chord progressions on "American Idiot's" mournful "Wake Me Up When September Ends" and A Chorus Line's "What I Did For Love," showing that Green Day's rock music isn't so different from that of a Broadway show. Armstrong then reveals a childhood story that may explain why the similarity is there.

When Billie Joe Armstrong takes the stage as St. Jimmy, it's done on a night with no advanced fanfare. The theater audience erupts with the kind of enthusiasm reserved for the arenas where Green Day plays. It brings "Broadway Idiot" to a close with a meta-like folding in on itself. Oddly enough, though I was familiar with hearing Armstrong sing his numbers on the album, I missed Vincent's St. Jimmy, to whom I'd become accustomed to during "Broadway Idiot."

I love this kind of backstage documentary, which is not surprising for someone who has "All That Jazz" and "All About Eve" on his all-time top ten list. This example is very well done. "Broadway Idiot" overflows with information about the show which, full disclosure, I saw and enjoyed when it opened in 2010. Your mileage may vary, however. I'd subtract half a star if you're not a Green Day fan, and add a half star if you're a diehard fan of musicals, Green Day or both. 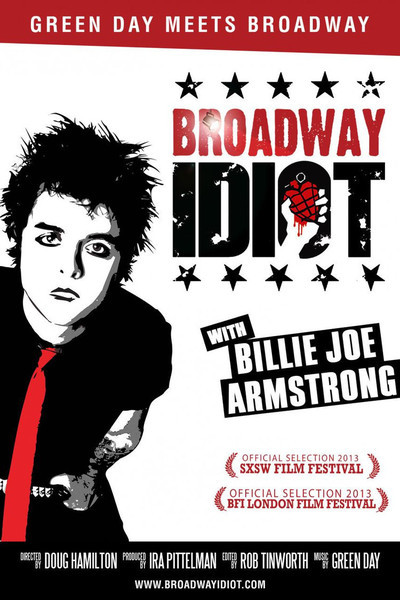 Michael Mayer as Himself (archive footage)

Michael Esper as Himself (archive footage)

Mary Faber as Herself (archive footage)

Christina Sajous as Herself (archive footage)

Stark Sands as Himself (archive footage)

Tony Vincent as Himself (archive footage)

Tom Kitt as Himself (archive footage)

Steven Hoggett as Himself (archive footage)