Carrie Fisher and Debbie Reynolds stand side-by-side on a red carpet. The occasion is the third auction of the items in Reynolds' awe-inspiring collection of Hollywood memorabilia. A reporter asks, "What is it that connects you two off the red carpet?" Fisher answers, "We are always on a red carpet. We have red carpets connecting our homes." That last part is an exaggeration, but only slightly. Fisher and Reynolds lived next door to one another for decades. They took their red carpet with them wherever they went. The blessing and curse of fame. This unique relationship is the subject of “Bright Lights: Starring Carrie Fisher and Debbie Reynolds," directed by Alexis Bloom and Fisher Stevens. It will be airing on HBO on Saturday night.

The documentary premiered at the 2016 Cannes Film Festival, and then played at Telluride and the New York Film Festival, initially as a tender, human, and very, very funny portrait of Hollywood royalty. And then came the horrible news of Carrie Fisher's death at age 60 from a heart attack, and—before anyone had a chance to take a breath—the news of Reynolds' death at age 84. According to Todd Fisher, Carrie's brother, Reynolds said before dying that she "wanted to be with Carrie." "Bright Lights" now makes its HBO premiere directly into the immediate shock waves of industry and fandom grief.

"Bright Lights" opens with a montage of home movie footage: young Carrie and Todd Fisher in matching outfits, young Debbie Reynolds, with her husband Eddie Fisher (who, famously, left the family to marry Elizabeth Taylor), as Fisher and Reynolds have a conversation in voiceover. They bicker (Fisher: "This is getting so ugly so fast"), but in such a rapid-fire humorous way that it sounds like well-oiled schtick. It IS schtick, but it's not a retread of somebody else's tired routine. This routine is theirs, and theirs alone. Listening to it now is almost unbearably touching. There's a moment late in the film when Fisher and Reynolds, collapsed together on the couch, do a spoken-word version of "There's No Business Like Show Business," making it sound like an impromptu conversation. It's an extraordinary scene (not to mention hilarious), and an encapsulation of the relationship, the way they picked up on each other's cues via extra-sensory sensitivity, setting each other up for punch lines gracefully, like the two old pros that they were.

The documentary was shot mostly during 2014 and 2015, busy years for both women. (There's one extraordinary scene from 2010, when Fisher visits her father on his death bed.) Fisher was preparing to go film "Star Wars: Episode VII - The Force Awakens," working out with a trainer as per LucasFilm's request, and Reynolds—against her daughter's advice—was still booking gigs in Las Vegas and elsewhere, despite the fact that she was feeling ill. Reynolds received the SAG Lifetime Achievement Award during this time, and there was also the third auction of her gigantic Hollywood memorabilia collection, which she attended with her children.

"Bright Lights" gets so much done that it's hard to believe it's only 95 minutes long. The documentary includes mini career retrospectives of both Reynolds and Fisher, with movie clips and commentary from both. There are interviews with both women, and they talk about their lives and careers but most of all, of course, they talk about each other. Fisher expresses worry about her mother's health, saying: "Everything in me demands that my mother be as she always was. She just can't change. And she's fucking with me." These words now have a haunting echo. The devotion to preserving Reynolds' collection of Hollywood memorabilia (Dorothy's ruby slippers, Marilyn Monroe's "subway-grate" dress from "The Seven Year Itch," to name a few) was a family activity, and all of them well up with tears of outrage and pain when they speak of the fact that nobody in the industry was interested in preserving the history Reynolds had collected, at least not interested enough to put up the money for a museum. Auctioning off those items was like cutting off a limb. At the last minute, Reynolds decides that she cannot part with the "Rat Pack suits," saying, "I love my ghosts. I love having memories. It's like having a friend forever." To those unaware of Reynolds' passion for collecting and preserving, "Bright Lights" serves as a beautiful reminder.

There are echoes of "Postcards from the Edge," (the book and screenplay written by Fisher) throughout, although with a softer, more forgiving edge. Fisher admits that she wrote the book at a very angry time in her life. Watching the elderly Debbie Reynolds, in her heavy-beaded gown, surrounded by helpers, walk up and down the stairs to the stage, was an image of show business professionalism that is a total inspiration. She was a woman who came up in a brutal studio system, who loved entertaining people, and was still out there doing it, even though the crowds now were smaller and older. Despite her worries, Fisher understands why Reynolds needed to keep performing: "Performing gives her life. It feeds her in a way family cannot." One of the most powerful impressions I got from Reynolds in "Bright Lights" was that her cheerfulness was not naivete, ignorance or shallowness. Her cheerfulness was a choice. Her cheerfulness shows how tough she was. Her cheerfulness helped her survive, in the same way that Fisher's humor helped her survive.

Any time a celebrity dies and fans mourn publicly, the usual suspects show up to scold and mock ("You didn't even know this person." "In such a serious world, THIS is what you care about?" etc.). Or, in a particularly egregious example, harass Steve Martin—a man who knew and loved Carrie Fisher in real life—for not expressing his Tweet-grief in a way that they thought appropriate. It was not anyone's finest hour. What these scolders don't understand is that celebrities—or icons—really matter to their fans in ways intense and personal. In many cases, it is a personal loss. There's a moment in this film at a comics convention when a fan, getting Fisher's autograph, dissolves into tears right at the table. There's another moment when Reynolds comes out of the stage door after her show in Vegas, and a middle-aged male fan standing right there waiting for her, blurts out, "I love you!" Of course he does. Millions did. Love like that often represents the best part of us, because it's pure, and it comes from a place of gratitude, gratitude that these generous women have shared themselves with us, have given us so much.

"Bright Lights" would have been entertaining even if both women had still been with us. But now, so sadly, it takes on whole other layers of meaning and impact. Tribute and mourning are often one and the same thing. They are within "Bright Lights." 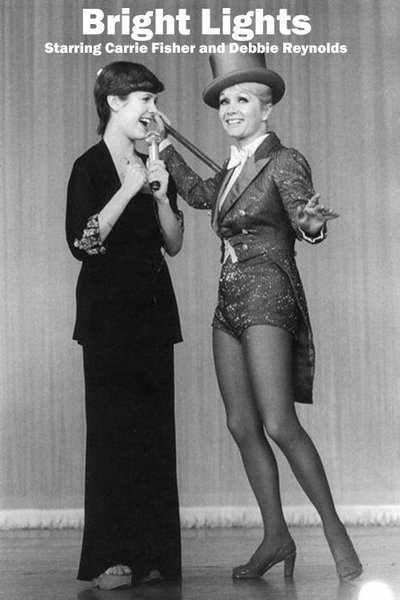 Carrie Fisher as Herself

Todd Fisher as Himself

Eddie Fisher as Himself

Griffin Dunne as Himself