As it becomes the chillest surfing movie ever made, “Breath” most of all wants to share its sentimentality for a specific time period in Australia (the mid-'70s), at a very specific time in a man’s life (being 13). Based on the novel by Tim Winton, “Breath” is dedicated to the notion that we are the shape of our experiences, and the chances we take. Growing up is one hell of an emotional ride, it gestures with the gentlest “hang-loose” sign. But in spite of his low-key ambitions, debut filmmaker Simon Baker doesn’t yet have the eloquence as a director to get you on board.

Winton provides the “Stand by Me”-like voiceover for a character named Pikelet, looking back on his days of being a teenager who learned the ways of surfing, women, and emotion thanks to those around him. With his older version never shown, “Breath” focuses on the younger self, as played by Samson Coulter, who along with his best buddy Loonie (Ben Spence), are pretty recognizable as 13-year-olds: they relish their F-bombs, thrive off reckless goofs that could get them hurt (like biking near trucks or horsing around in the water) and steal anxious glances at women. The two beach blonds share a clear dynamic as well, with Loonie’s dangerousness coaxing out hero Pikelet further out of his shell. Outside of his friendship, he falls into a little romance with a classmate named Karen (Megan Smart), but is more clueless about his feelings than she is.

Baker enters the picture as Sando, the shaggiest beach blond of them all, who indoctrinates them into the world of surfing. With books like Moby Dick and White Fang prominently on his bookshelf, Sando becomes a harmless father figure (Pikelet’s father, played by Richard Roxburgh, is weirdly reduced to smiling at his son from afar, as if his arc was cut out). Sando takes the boys on progressively wild surfing expeditions, emphasizing the idea of facing fear by catching waves, while withholding pieces about his own life. As he gets smarter, Pikelet learns the most about life by observing Sando, not just by following his advice. But even as we’re seeing this all from Pikelet’s point-of-view, Baker’s character is only mysterious, not interesting.

A typical coming-of-age story starts to matriculate, especially with ideas of wisdom learned from the older people that we look up to, and the rewards of overcoming fear. Its pretty mild stuff, until it goes off the rails with a subplot involving Pikelet getting closer with Sando’s American wife, Eva (Elizabeth Debicki), who has a scar on her leg from a skiing accident in her happier past life. I won’t spoil what happens because it arrives much so much later in the movie, but it’s such a distinct chunk that it seems like a kooky sequel to the surfing lessons, with only thematic similarities about fear and interacting with under-written women to connect them. It’s telling that even this passage doesn’t give “Breath” the pulse that constantly eludes it, but it does make the film less forgettable as you toss it onto the pile of coming-of-age tales.

In place of a striking directorial vision, Baker leads viewers with sensitivity. Not just with his love for syrupy slow motion and an instructive score from Harry Gregson-Williams, but in how he expects to captivate you with an innocent nostalgia, while showing how boys find their way to becoming men. It's just never enough, even if one tries to rationalize it (as I did) as like an early, airy Clint Eastwood-directed project a la “Breezy,” which itself shouldn’t be a dream comparison for any filmmaker.

But if you’re tuning into “Breath” because you’re a fan of Simon Baker after “The Mentalist,” you can be assured that his skills as a feature director can be classified as “capable.” His greatest weakness is editing, both as a co-writer and as an editor. This 114-minute jalopy is far too simple with its imparting wisdom, and unfocused with its story, to be this long. All the while the movie has a loose sense of time, so it’s just about a course of events in which Pikelet gets older (though the actor does clearly physically age throughout the story, which makes a half-compelling lead performance a bit sharper).

However, when “Breath” cuts to the surf, it does reach a certain aesthetic ease. The film’s overall teal sheen is understandably less odd when Baker and his young co-stars are on the water, navigating life lessons with each wave conquered. There are some captivating, extended shots that follow a surfer as they race away from towering water that seeks to swallow them. And there are some great moments within the water, as captured by water photographer Rick Rifici, that look up at the swirls created by waves, articulating the water’s ebbing chaos and calm, with gliding surf boards added to the canvas. These images are but flashes of the daydreams that Baker wants viewers to have, all within a movie more likely to lull them to sleep. 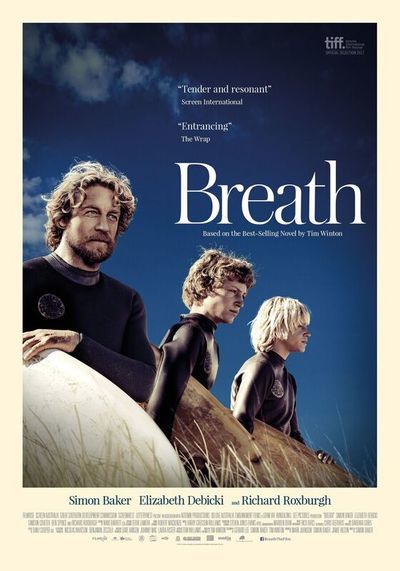