There's never any doubt that things will work out just fine in "Breakthrough," and not only because Roxann Dawson's movie is based on a true story. It's also because of the film's overtly Christian approach, which leans strongly toward the evangelical side of its discussion of faith and religion.

The story focuses on Joyce Smith (Chrissy Metz), a true believer. Grant Nieporte's screenplay is based on the real Smith's 2017 book (written with Ginger Kolbaba) The Impossible: The Miraculous Story of a Mother's Faith and Her Child's Resurrection, and yes, that title is more than a bit of a spoiler. Then again, the very idea that the story was written in the first place is a spoiler.

If there's little room for doubt in such tales of alleged healing through faith, there's even less for the painful reality that most similar stories don't have a "miraculous" ending. To its credit, this movie does have a character question why some people live, saved by some miracle, while others, similarly loved and prayed for, die. It doesn't care about a possible answer, of course, because that might get in the way of its sermonizing.

With her husband Brian (Josh Lucas), Joyce has been raising John (Marcel Ruiz), whom the couple adopted during a mission trip to Guatemala. At 14, John is far more interested in music and friends than his mother, who expects her son to behave and speak as if he's not an adolescent. The movie attempts to give Joyce a minor character arc. At the start, she's judgmental of things she doesn't like, such as John Noble (Topher Grace), the new pastor at her church, as well as his hair and his music choices for church service (Someone raps during a song of praise!). By the end, she doesn't need to be judgmental and overbearing, because the world has proven her right.

Anyway, John and a couple of friends fall through the ice on a local lake. He is submerged for about 15 minutes, before firefighter Tommy Shine (Mike Colter), believing he hears a voice telling him exactly where to look, pulls the boy out of the water. You get one guess as to where Tommy, a proclaimed atheist, is last seen in the movie. His inevitable conversion is treated as just that—an inevitability.

Doctors pronounce John dead, but when Joyce yells out a prayer next to her son's body, the boy's heart starts beating. Still unconscious, he's rushed to a hospital with a drowning specialist (played by Dennis Haysbert), who isn't optimistic about John's chances. Joyce tells the doctor to do the best he can and to "let God do the rest."

The rest of the film has John beating the odds, while other characters, primarily Joyce, provide lectures about the importance of faith and the futility of doubt. There are also some harsh words for anyone who has difficulty accepting the breadth and depth of the mother's faith. Those scolded include doctors who discuss John's condition while they're standing next to the kid, friends and parents in the waiting room who suggest the boy might not make it, and Brian, who understandably has trouble with the idea of seeing his son in this condition. In the movie's mind, though, such thoughts and feelings are just obstacles in the way of faith.

This movie does not want us to consider faith as a concept, which can give people strength and hope in times of trouble. Instead, it wants to tell us that a specific kind of faith is so strong it can generate miracles—and, therefore, so correct that it might as well be a tangible, undeniable entity. And in the view of the filmmakers, doubt is simply something that needs to and will be proved wrong in the end. Any character who experiences that feeling in this story is seen as a coward, or weak, or misguided.

It's a strange, almost exclusionary view of how people respond to difficulty. This view only offers sympathy towards those with the "right" kind of faith. For everyone else, it offers pity, disdain or impatience—pity that someone doesn't believe as strongly as the central character, disdain that anyone would question that belief, and impatience for those who just need to see the truth.

The appeal of such stories is obvious. "Breakthrough," though, is less a story than it is a sermon, aimed directly at the choir and nobody else. 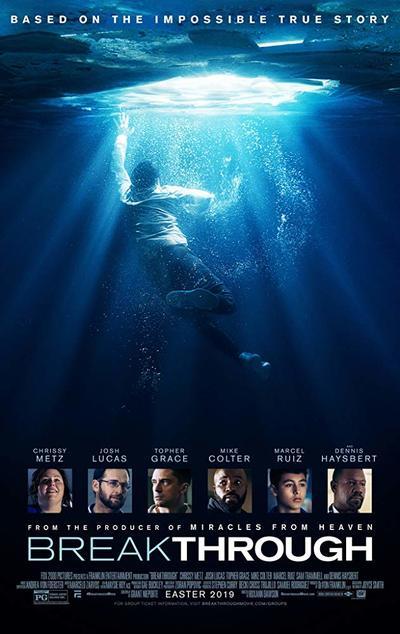