"Breaking Fast" is a sweet romantic comedy that shows how it's possible to observe nearly every convention of the mainstream romantic comedy yet still deliver something that feels new.

Written and directed by Mike Mosallam, the movie follows the romantic adventures of Mo (Haaz Sleiman, "The Visitor"), a thirty-something gastroenterologist from West Hollywood who also happens to be a religiously observant, gay Muslim. Right off the bat, Mosallam establishes that this is going to be a formulaic but earnest rom-com with a unique energy that comes from the characters' cultural backgrounds. A prologue finds Mo getting dumped by a closeted boyfriend that he adores (Hassan, played by Patrick Sabongui). Hassan has decided to marry a woman to appease his religiously and socially conservative family. The cognitive dissonance of the hero's identity is a source of observant humor that the movie will return to as the rest of the story unfolds. But note that the movie has sympathy for Hassan, too—Mo is an openly gay Muslim with a supportive and accepting family, a luxury that he takes for granted.

Jumping ahead one year, we find Mo still wounded in the aftermath. At a birthday party for his non-observant Muslim best friend Sam (Amin El Gamal), Mo meets a handsome white actor named Kal (Michael Cassidy) and spends the night walking around the city with him, in a series of relaxed dialogue scenes that might've treated Richard Linklater's "Before" trilogy as partial inspiration. Kal explains that his name comes from Superman's original Krypton name, Kal-El, a tidbit that thrills Mo because he's a huge Superman fan. There's a bit of subtext here that's more effective for not being spotlit and turned into text: Superman is itself a tale of immigrant assimilation into the mainstream of American life, about an exceptional individual who must keep his specialness under wraps in order to live a "normal" life.

Mosallam has a good feel for the rhythms of conversations that are filled with expository dialogue and monologues—a tricky balance, not easy to pull off—and the performers are appealing and don't overdo things. Sleiman doesn't make the mistake of playing his character as a bland "Everyman" scrubbed clean of eccentricity. The character can be neurotic and a bit manic at times, and when emotions flare, the hero's delivery has hints of Nicolas Cage kookiness. And the movie doesn't make the mistake of turning Kal into a pinup for some sort of abstract "all-American" type, even though the hero initially is attracted to him for those reasons. He's in recovery and has a traumatic family background that comes into play.

There's no tour-de-force filmmaking or acting here, just skilled professionals taking a familiar template and doing something fresh with it. This is a movie that proves you don't have to reinvent the wheel to build a new road. 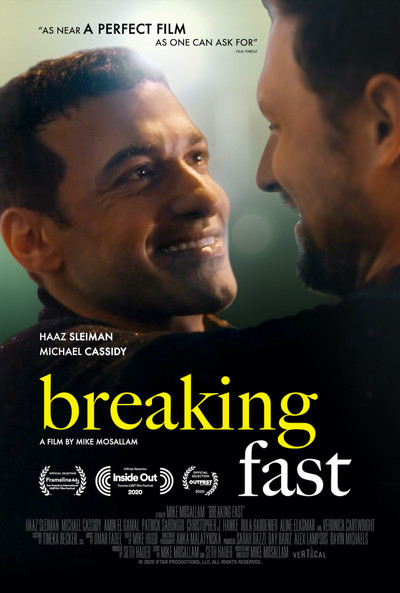