At the outset, "Breakfast with Curtis" looks pretty rote. It's a coming-of-age story in which the title character (Jonah Parker), an awkward, home-schooled 14 year-old, grows up by becoming more confident, and socially aware. Thankfully, "Breakfast with Curtis" is much better than that sounds. It's a lived-in, unsentimental comedy about a community of smug but sympathetic intellectuals that, by film's end, becomes a little better-integrated.

"Breakfast with Curtis" is more about ambience than narrative progress, so if you don't like these kinds of characters (ie: hippy-dippy aesthetes), the film will drive you up a wall. But even if you don't immediately like the film's protagonists, you'll grow to like them. On a warm summer day, Curtis's neighbors drink red wine, dig holes in the backyard, play ping-pong, write, read, and "think mundane thoughts," as landlady Sadie (Yvonne Parker) wonders aloud. "Curtis" is exclusively populated by people that live in their heads. They define themselves by the book on their shelves, have taste enough to listen to Brian Eno's "Taking Tiger Mountain by Strategy," and post Emily Dickinson aphorisms on their bedroom doors ("I dwell in Possibility, a fairer house than Prose."). Curtis's pubescent awakening makes sense in the midst of these amenable snobs. So while the conclusion that writer/director Laura Colella arrives at is predictable, the way she lets her characters get there is sweet, and totally charming.

Avoiding declamatory dialogue, "Breakfast with Curtis" explains a lot about its characters through their actions. For example, at this point in his early life, Curtis is trapped in his gangly body. He's too old to not look awkward when he day-dreams. But he needs time to space out since he is, at first, a personality-less void. When he jostles around in bed, you get the sense that Curtis doesn't really think much of anything. And when he plays the piano, he has prodigious muscle memory, and hits all the keys with admirable technique. But his playing isn't passionate, probably because Curtis is 14 years old. Enter Syd (Theo Green, in his tremendous debut), the book-selling raconteur and layabout next-door. Syd asks Curtis to  help him film some YouTube videos of wherein he rambles about all and sundry: the weather, his favorite bar, memories of great books, and greater people.

Syd's presence is exactly what Curtis needs to grow up. He's emblematic of the kind of people you'll meet in "Breakfast with Curtis." Being a self-involved creative type, Syd thinks he's fascinating. He lazily hits on Sylvie (Virginia Laffey), his pot-head neighbor/factotum Frenchy's (Aaron Jungles) girlfriend, and infrequently orates to himself, as if he were giving a guest-lecture about life, and the universe. His monologues are what Quentin Tarantino's introductions for Rolling Thunder, Tarantino's cult film-distribution line, might have been like if they were about Proustian reminiscences instead of "Switchblade Sisters." Syd's quick-tempered, and often affects a theatrical accent (you should hear Green say "ex-traor-di-nary"). He's insufferable, and endearing, too.

Instead of having a straight-forward plot, Colella's film is comprised of a series of successive episodes. Over time, protagonists become more, though thankfully not completely, comfortable in each other's company. It's telling that the scene where Curtis's believably uptight dad Simon (David A. Parker) bonds with Syd, and his friends is a scene where Simon spontaneously composes and performs a jokey song about Syd's "dingley-dangley" penis. When everyone, especially Syd, laughs, it's one sign among many of how comfortable Colella is in her film's milieu. She knows exactly when to use an extreme close-up (sparingly!), and the importance of letting her characters reveal themselves through little gestures. In fact, while "Breakfast with Curtis" is weakest when Colella has to prove that her characters have changed over the course of the film, the film is otherwise consummately relaxed. "Breakfast with "Curtis" is believably generous where most coming-of-age stories are unbelievable. It doesn't try too hard to impress you with its candor: it's just naturally likable. 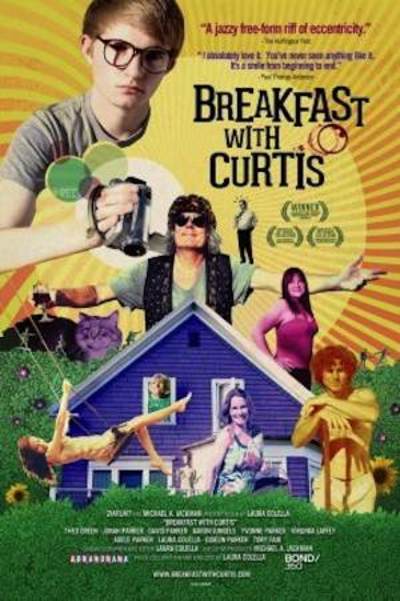 David A. Parker as Simon