Though he’s been quite the presence in fantastical, supporting roles in the likes of “Game of Thrones” and “Justice League,” Jason Momoa’s day as an action lead has yet to come. Enter Lin Oeding’s “Braven,” a movie as dumb and bloody as a slab of meat, but with Momoa playing an emotionally vulnerable logger who you also believe would throw an ax at someone's face.

Wearing modern clothes and leading an action vehicle for one of the first times ever, Momoa positions himself as a snowball-tossing, Porter-drinking, tree-chopping family man, with specifically no mentioned history of him ever killing before. But before he finds himself squaring off against drug dealers in his small family cabin out in the woods, we get a sense of his loving relationship with wife Stephanie (Jill Wagner) and their daughter Charlotte (Sasha Rossof). In the script’s most unexpected edge to this type of story, Joe has an emotional vulnerability for his father Linden (Stephen Lang), whose mental health is deteriorating. After Linden is in a scuffle at a bar when confusing a random woman for his late wife, Joe decides to take him up to the family cabin for a tough chat about getting medical care, with Charlotte sneaking aboard the truck.

But woe, as we see during drawn out sequences of cheesy goonery in between hints of Joe’s quiet life, the cabin has become a drug stash locale by one of Joe’s worker friends (Brendan Fletcher) and an accomplice (Zahn McClarnon), after they crashed a logging truck that was carrying a log with a whole lot o’ drugs inside. This propels lead baddie Kassen (Garret Dillahunt, whose riff on malevolence is to smoke cigarettes inside a diner and generally seem weary of this shit) and his men to to the cabin to get the drugs themselves. The stakes are obvious from the beginning to Joe that his family will not survive after giving the drugs back, so the second half of “Braven” turns into a bloated fight scene with more dead bodies than pings of simple amusement you might feel owed from the premise alone.

With such a simple concept, and with its big showdown happening only over the course of a couple hours or so, there’s a disappointing lack of tightness to the big picture. Instead of sharpening its basic elements like character and location, "Braven" piles on more stuff; the script even works overtime to set things up at the cabin and with the dumb truckers, as if we’re to be emotionally invested in their oopsie-daisy, until it starts to directly affect the Bravens. Later on, the script adds crossbow-toting Stephanie and some cops, creating more opportunities for people to battle but less chance of immediacy. As “Braven” becomes more than just than an impromptu OK Corral showdown, there are still too many moving pieces to worry about any one of them in particular.

Oeding, himself formerly a stunt coordinator, makes a case that he could be a strong fight scene director in due time, but his directorial comprehension lacks a sense of space and the people within it. While Momoa's character is more compelling than just watching a modern, housebroken Khal Drogo, the forces of evil he's up against (gun-toting henchmen with beards) aren’t so much forgettable as inconsequential. And the free-for-all setting of the snowy woods, for all of its opportunities of visibility and camouflage, is wasted by not establishing a concrete sense of the property's geography (even though the opening credits are dedicated to setting Newfoundland's amazing views).

But you’re probably reading this review wondering most of all if the action delivers, or if it fulfills in the crude art of “cool kills.” That is one facet where the movie does have some inspiration, where its nimble brawn sometimes comically zigs when you think it’s going to zag—a character is stabbed despite the promise of being shot, or a fight scene ends with men being thrown off a cliff, in two cases. Even a bear trap is used in a way that might make you think, after laughing, “well, that's unusual.” “Braven” is an automatic type of action movie, often only challenging its predictability by getting goofier and goofier. 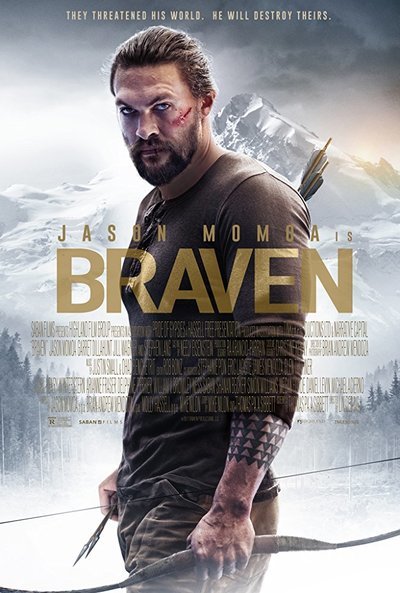 Rated R for violence and for language throughout including some sexual references.