In 1959, the writer and philosopher Guy Debord, best known for his work on what he called “the society of the spectacle,” made a short film called “On the Passage of a Few Persons Through a Rather Brief Unity of Time.” A simple title, but one with a lot of implications. It could serve as an alternate title for the French film “BPM (Beats Per Minute)." Known as “battements par minute” in French, the phrase that initially referred to the human heart was then applied to modern dance music.

The way this movie relates to the Debord title is in the fictionalized story it tells, about the Paris branch of the AIDS activism group ACT UP in the 1990s. Directed by Robin Campillo from a script by Campillo and Philippe Mangeot, the movie opens with a few members of the group storming the stage during a government presentation on their handling of the AIDS crisis. Their shock tactics get a little out of hand, and the movie cuts to a meeting of the group after the fact, comparing notes, admitting fault, expressing humorous confusion at the contradictions between individual accounts, and discussing what to do next. The movie makes canny use of non-linear editing, moving backwards and forwards with engaging fluidity, and it keeps this up throughout. But the movie, in its 140-minute or so running time, sets itself down purposefully enough to give the audience a good look at several characters sharing a “unity of time” in different ways.

There’s Thibault (Antoine Reinartz), the pragmatic head of the group, who’s always looking to achieve a balance between the eye-opening protests of the group and a kind of constructive engagement with the government officials and big pharma reps who are slow to respond to the crisis. Sophie (Adèle Haenel) is one of the relatively few women in the group, an eloquent and energetic front-of-the-line type. The group’s makeup is mostly of gay men, but it’s hardly exclusive. The teen Max (Felix Maritaud) got the HIV virus by transfusion, and both he and his single mom Hélène (Catherine Vinatier) are passionate factors in the group. Max mixes up, in his apartment bathtub, the fake blood that the group uses to decorate the office of one pharma company at which it stages an intervention.

None of these characters come across as a “type” during the scenes in which we get to know them. The actors delineate them as strong individuals. The film’s sharpest focus is often trained on Sean (Nahuel Pérez Biscayart), a pint-sized provocateur whose passion is matched by fierce logic and charismatic eloquence. He forms what seems an unlikely romance with Nathan (Arnaud Valois), a hunky, quiet newbie whose negative HIV status arouses initial suspicion when he joins the group. Their love story is frank, sometimes funny, and eventually heart-rending.

What the movie does, beautifully, and unfortunately, necessarily, is remind the viewer that the axiom “the political is personal” is not a fluffball bromide to be set aside in the postmodern world. “BPM” recounts with precision an era in which people died in part because governments tacitly (and sometimes not tacitly) agreed worldwide that a particular virus was punishment for deviant behavior and thus not something that deserved urgent attention. The tactics of ACT UP were deemed “extremist” by many. This movie demonstrates the humanity of these activists, people whose backs were against a wall. It does so with humor, compassion, affinity, and no condescension. Even if you consider yourself reasonably well-versed in the history, “BPM” is a kind of wake-up call, a cinematic alarm against complacency. 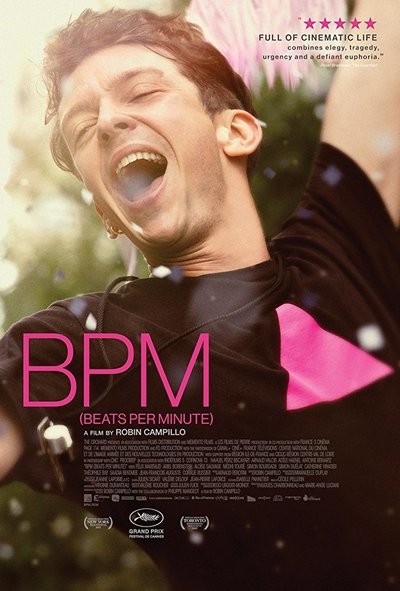