Boys On The Side

The very last shot in "Boys on the Side" is of an empty room. As the camera pans around it, we remember who was in it, and how much we grew to care about them. We may be a little surprised by how that happened, because the movie starts out seeming contrived and routine, and only gradually gathers power until, by the end, it is completely involving.

The opening is a Meet Cute. A singer named Jane (Whoopi Goldberg) gets fired from her job in a crummy New York club, and decides to head west in search of her destiny. She answers an ad from a woman named Robin (Mary-Louise Parker) who has a car and is looking for someone to share the driving.

Robin is, Jane decides, "the whitest human in America." How white? She once sang "Close to You" in a talent contest, and "The Way We Were" is her favorite film. But Jane needs the ride, and so they team up and hit the road, and so far nothing of great interest has happened, and we're anticipating this will be another one of those Goldberg roles where she gives white folks lessons in black appreciation.

The first glimmer of strangeness comes in Pittsburgh, where they stop off to visit Jane's friend Holly (Drew Barrymore). Holly's boyfriend Nick (Billy Wirth) is a textbook example of a drugged-out paranoid who ministers to his own inadequacy by beating on his woman.

The Goldberg character waltzes in between them, but suddenly it is quiet Robin, a former Realtor, who commands the room - approaching the domestic violence as if it were a house closing. Jane, Holly and even the drug-dealing loser fall silent in amazement as she somehow brokers them into a truce.

It doesn't quite last - Holly has to get Nick's attention with a baseball bat and then tape him to a chair before they can escape - but soon the three women are in the same car, heading west, and we realize this is not going to be a sitcom, a buddy movie or a road movie but a story that develops on its own unexpected terms. The director is Herbert Ross ("Steel Magnolias") and the writer is Don Roos ("Single White Female"), and with the actresses they create three true originals.

There are elements of the plot that are shamelessly contrived - including the whole setup explaining why they think they need to go on the lam. But we don't care, because by then the movie has entered so deeply into these three lives that what really matters is only what they think about one another.

It is clear from the first scene or two that the Goldberg character is a lesbian. Less clear is whether the Parker character knows that, or how she feels about it. Parker, too, has a secret, which will not be revealed here. And the catalyst in the group is the Drew Barrymore character, filled with crazy energy, high spirits and deep broodings.

Those who know Barrymore from her adolescent headlines in the supermarket trash press may not realize that in movies like "Guncrazy" (1992), she has been developing into an actress of great natural zest and conviction. The difficult emotional scenes in "Boys on the Side" belong to Goldberg and Parker, but it is Barrymore whose spirit somehow draws them together into a family. And the movie gets a lot of comedy out of the Barrymore character's tempestuous love affair with a Tucson cop named Abraham Lincoln (Matthew McConaughey), who is an absolute straight arrow, and at one point does the most incredible thing and then explains, "I take this name seriously! I cannot tell a lie." The others groan: "That was George Washington, schmuck!" As for the other two women, they just get stronger and stronger as the movie goes on. Goldberg so often wastes her time (in movies like "Sister Act 2: Back In The Habit") that her work here is a reminder of such great past roles as "The Color Purple" and "The Long Walk Home." It is an exercise in restraint: She is wise, grown up and calm.

She never reaches for an effect, never goes for a laugh that isn't right there in her hand, and deals with her character's lesbianism in a way that can perhaps be called good manners: Yes, she is gay, but she doesn't believe in imposing her choice on others, and it is only gradually that we realize what the stillness of her heart can contain. She can also be very funny. Her take on some lesbians: "They're very emotional, they love uniforms, and don't break their hearts. Especially UPS uniforms." The Parker character is a series of revelations, some sad, some delightful; the way she handles the violent Nick is one of the bravura scenes in recent movies, and we get the impression the other actors want to applaud as much as the audience does. Later, she has a couple of big emotional scenes that are played on exactly the right notes. Look, for example, at the way she sees a piano that is a gift, and bites her lower lip. A tiny gesture, but the right one.

The reviews for "Boys on the Side" will mention "Fried Green Tomatoes" and "Thelma and Louise," because it shares their assorted themes: female bonding, unexpressed love, women on the run. But this movie is not a collection of parts from other films. It's an original, and what it does best is show how strangers can become friends, and friends can become like family.

By the end, it has prepared its ground so completely that the final powerful scenes can be played very quietly. Some people sing a song. A room is empty, and the camera remembers who was in it. And we miss them. 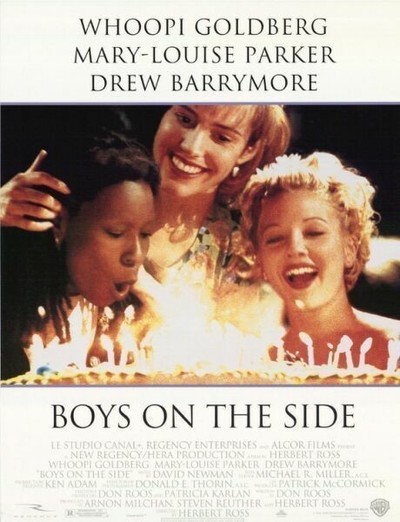