Luke Moran wrote, starred in, produced, and directed this facile, surface-level exploration of what exactly happened at Abu Ghraib in 2003 and 2004. "Boys of Abu Ghraib" avoids some of the jingoism set up by opening shots of fireworks, barbecue, and birthday cake but still fails as human drama or political commentary by refusing to really be either. The abuse of power at Abu Ghraib is such a complex situation that the great Errol Morris has essentially made two movies about it ("Standard Operating Procedure" and the upcoming "The Unknown Known," which is about Donald Rumsfeld but devotes a lot of time to AG). How did well-intentioned soldiers end up doing such unspeakable things that the unveiling of them essentially turned the international perception of the war? "Boys of Abu Ghraib" has a few, brief insights into how boredom, anger, and frustration helped fuel the rage that led to torture but the film couches it all in the filmmaking of TV-movie melodrama, draining it of all potential power or social context.

Jack Farmer (Moran) "was a 22-year-old boy in post-9/11 America, a boy who didn't want to sit it out, a boy who wanted to make a difference." He ships out on July 5, 2003, a filmmaking convenience which allows for the aforementioned Americana in the opening scenes with dad played by John Heard and girlfriend played by Sara Paxton. From the very beginning, "Boys of Abu Ghraib" looks and sounds like a basic cable TV movie. Heads are cropped in boring close-up, piano keys are used to tune emotion, and dialogue has blunt simplicity, like "Come back to me, Jack."

Farmer lands at Abu Ghraib, the largest detention center in the world, and what almost immediately sets in is devastating boredom. The men there have next to nothing to do. They live under the constant threat of mortar attacks but the days are long and the nights are spent around a bonfire in an attempt just to create a little bit of home. And, in the film's most interesting bit of dialogue, they're reminded that the men being held in the center are either innocent or insane. They're either people who don't belong there or men willing to kill children. The impact of tedium and lack of anything to do but lift weights on the soldiers is too briefly touched on by Moran's script. When Farmer says in narration, "We do not fight terrorists, we fight boredom," I wished the movie had shown us more of the impact of that instead of putting it in voiceover. There's a story there but Moran never allows it to develop.

"Boys of Abu Ghraib" switches gears when Farmer breaks the rules (dictated to him by a superior played by Sean Astin) and speaks to one of the detainees, a quiet gentleman named Ghazi (Omid Abtahi). Farmer becomes convinced that Ghazi is innocent, and protests more vocally over his repeated torture despite his colleague's protestations that you can't really see the detainees as people. The narrative choice to make Jack the lone voice against the men who push other men's faces into urine feels like a cheat when compared to the history of Abu Ghraib. Is it possible that there was one man who spoke out against the torture? It's possible. But the truth seen in other documentaries like Morris' and Rory Kennedy's "Ghosts of Abu Ghraib" is much less black-and-white. It would be one thing if "Boys of Abu Ghraib" was a sentimental tale of a small-town boy disillusioned by war but using the most notorious torture case of the conflict adds a sense of historical responsibility which Moran can't satisfy as a filmmaker. It is to what happened at Abu Ghraib as reenactments on shows like "America's Most Wanted" are to the truth of the crimes depicted. They get the basics but lack the depth. And this is a story that still resonates in the way we deal with war, torture, and detainment camps. It demands depth. 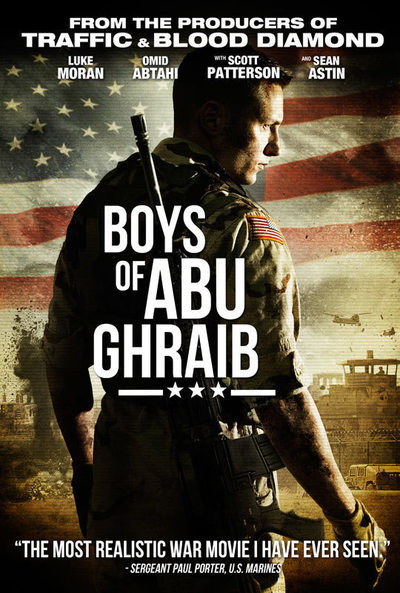