A title card at the beginning of “Borg vs. McEnroe” explains how the rivalry between the two legendary tennis players—and, specifically, their grueling showdown at the 1980 Wimbledon championship—changed the sport, and each other, forever.

It’s an early example of the film’s frustrating tendency to tell rather than show. This is the kind of conclusion we should, in theory, be able to reach for ourselves through some artful persuasion and finesse. But Danish documentarian Janus Metz—making his first feature, and working from a script by Ronnie Sandahl—feels the need to hold our hands and oversimplify these two titans of tennis.

Bjorn Borg and John McEnroe may have seemed like polar opposites when they met each other at Centre Court on that summer day for the men’s final. Borg, the cool and disciplined Swede, was all laser-like groundstrokes, patrolling the baseline with prowess and precision. McEnroe, the profane American hothead, was all about the serve-and-volley game, charging the net to intimidate his opponents as fast as he could. Borg was the reigning, four-time Wimbledon champion in pursuit of his record fifth victory. McEnroe was the wildly talented up-and-comer, and the only player who could possibly topple him.

But! And this is going to blow your mind … but perhaps these two seemingly antithetical athletes weren’t so different after all. That is the facile, pop-psychology synopsis “Borg vs. McEnroe” reduces its central figures to through repetitive childhood flashbacks, where we’re once again forced to sit through spelled-out explanations of their inner natures.

What’s frustrating is that the performances are worthy of stronger material, despite the fact that the story gives far more time to Sverrir Gudnason’s Borg than Shia LaBeouf’s McEnroe. Gudnason is essentially the lead here—even though both players’ names comprise the title—with LaBeouf unfortunately being relegated to more of a supporting role. Gudnason eerily looks the part of the heartthrob tennis superstar, and he’s got a quiet intensity about him that’s compelling. As we learn from glimpses at the teenage tantrums he threw against the coach who dared to take a chance on him (the always solid Stellan Skarsgard), his stoicism is the result of being instructed never to show any emotion. It’s as much of a strategy and practice as his methodical training sessions. (Tuva Novotny, who was so great earlier this year as one of the intrepid explorers in “Annihilation,” doesn’t get to do much here beyond smoke and serve as Borg’s dutiful fiancée.)

McEnroe, meanwhile, is all impulse. He can’t hide a single thing he’s thinking or feeling. And LaBeouf is thrilling as he continues his streak of playing difficult, dangerous men, following roles in Lars von Trier’s “Nymphomaniac” films and “American Honey.” But part of the undeniable allure of seeing him portray this notoriously volatile figure is making the inevitable comparisons to the actor’s own notorious volatility. He seems to be welcoming the similarities, wallowing in them. Perhaps it’s freeing, playing within this blurry middle ground between performance and reality. (He clearly has a proclivity for this type of self-referential exploration, if you look back at his performance art activities in recent years.) However he felt in his approach to becoming McEnroe, the result is fascinating, and by far the film’s strongest element.

But an even greater sin than giving short shrift to LaBeouf’s McEnroe is the way in which Metz stages the climactic tennis battle. It was epic, lasting five sets including a punishing, 30-minute tiebreaker toward the end to decide the fourth. The normally polite crowd was very much on Borg’s side, hoping to witness history and raining down uncharacteristic boos on the brash McEnroe. But Metz shoots and cuts it (with editors Per K. Kirkegaard and Per Sandholt) in spurts and glimmers—a hand here, a foot there, the flash of a racket, the toss of a serve—when the thrill of this kind of monumental showdown is lingering in the athleticism and stamina of its competitors. And once again, the announcers calling the match keep explaining over and over again how different Borg and McEnroe are from each other—this time, in a variety of languages.

Then, after the whole draining ordeal is over, Borg and McEnroe unexpectedly run into each other at the airport while they’re waiting for their flights home. They make eye contact and approach each other hesitantly at first, then get to talking for a little while—perhaps for the first time ever, really. The expectation of this off-court meeting is almost as tense as the build-up to the one they just had—but then Metz makes the mistake of pulling away, lingering from afar, letting us see them without hearing what they’re saying.

No one could possibly understand these guys more than they understand each other, which might have made this conversation the most riveting part of the whole film. Instead, it’s a rare and misplaced moment of mystery. 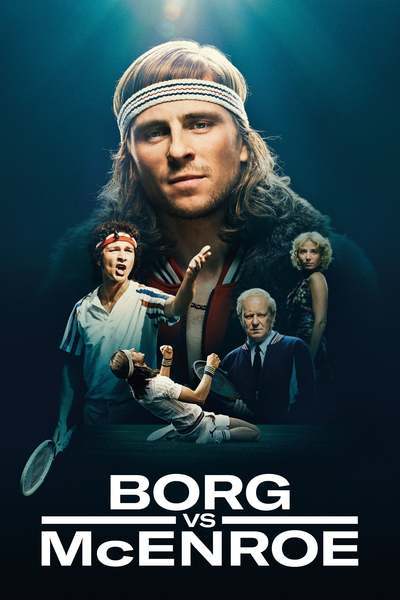