In a 2002 interview with author Salman Rushdie, American filmmaker Terry Gilliam made a provocative, but striking argument about why it's "too easy to love" the title character in Steven Spielberg's 1982 alien-adventure "E.T.: The Extraterrestrial:" "It's easy to love E.T., [but] it should be difficult to love E.T." since E.T. has "big Walter Keane Moonstone eyes," which leads viewers to "immediately love that little creature."

By contrast: even the most open-minded viewers may have difficulty relating to the two lead protagonists in "Border," a cynical Swedish romantic-fantasy that follows estranged border patrolwoman Tina (Eva Melander) and her unconvincing attraction to Byronic stranger Vore (Eero Milonoff).

Tina and Vore are two of a kind, as they soon discover. They even look alike: both have pronounced (prosthetic) brows, puffy cheeks, and jagged snaggleteeth. Sadly, their mutually exaggerated appearances—as well as how their monstrous nature is mercilessly sensationalized by writer/director Ali Abbasi and his co-writers Isabella Eklof and John Alvide Lindqvist—is so off-putting that I often found it hard to sympathize with Tina and Vore.

"Border" is Tina's story. We see the ugly, mundane world through her eyes (lit mostly with an antiseptic silver-green/blue color palette): people at her job are anonymous because all she can think about is her own inexplicable behavior and unflattering appearance. At her job, she smells passing travelers, sniffing for "shame, guilt, rage," or other heightened dark vibes. This technique is pretty helpful for a border patrolwoman: she uses her supernatural smelling abilities to ferret out a teenage smuggler, a child pornographer, etc. You might be wondering: what is this mysterious super-power? It's a mystery, for while, since Tina doesn't know where she comes from. That all changes when Vore—a mysterious traveler who confuses Tina's otherwise unerring nose—visits her at her job.

Vore is pretty unsettling, and not just because he looks like Phil Hartman in his Unfrozen Caveman Lawyer get-up. Look at the way that Milonoff smiles at Tina: it's a knowing smile, one that reveals more about Vore's unabashed randiness than it does about his character's defensive prickliness. Vore is supposed to be Tina's counterpart because he's unapologetic about what makes him different. He knows that he's not human, and that makes him act out. Like when he jokes around with Tina by disguising a tin of grubs (which he uses to feed his ... well, I'd better not) as a home-made bomb, complete with a time-piece and stray red wires. I know that this isn't supposed to be an endearing character moment, but well, it's really not endearing.

Still: Vore's also supposed to be good for Tina, especially when compared with Tina's grubby significant other Roland (Jörgen Thorsson), a cartoonishly manipulative dog trainer who loves his pooches more than he does Tina (Roland, in his first scene, to a scabies-infected dog: "Are you the star of this house? Good dog."). Roland's always mooching off of Tina: he doesn't contribute financially to their shared house and barely even pays attention to her when they're eating dinner together. By contrast, Vore and Tina are ostensibly SUPER-attracted to each other. Like when he shows her a Frankenstein-like scar over his right collar bone: "Lightning is no laughing matter. You can touch it, if you want." Or when they exchange wild, sloppy kisses right before having extremely awkward sex in the woods.

Tina and Vore's sex scene is a bit much, to put it mildly. He's previously identified as a trans or inter-sex character pretty early on when Tina's colleague strip-search him and discover that Vore has a vagina instead of a penis. But when Tina and Vore have sex, the scene isn't just indelicate about his trans identity—it's disappointingly cavalier and insensitive. I'm pretty sure I get what Abbasi and his colleagues are trying to do: acknowledge how Tina feels about herself while also not patronizing her character by making Tina seem any less ugly than she feels.

But Tina and Vore aren't just ugly-looking: their animal-like behavior is especially bewildering and depressing given that they live in an otherwise pseudo-realistic environment, where time passes like molasses through a strainer. We spend so much time watching Melander think about doing something that when she finally makes a move, her inherently jarring actions seem even more unnerving.

Tina and Vore's unnatural oddity might challenge our expectations about normalcy if "Border" wasn't set in an obnoxiously dour world filled with child pornographers and worse, one that brings to mind bleak chic Nordic noir like the "Millennium" trilogy, "The Killing," and "Jar City." In a world of human monsters, Tina and Vore's eccentricities are supposed to make them human; in reality, they just look weird and creepy. I know it should be difficult to love Tina and Vore; I just wish it wasn't this difficult. 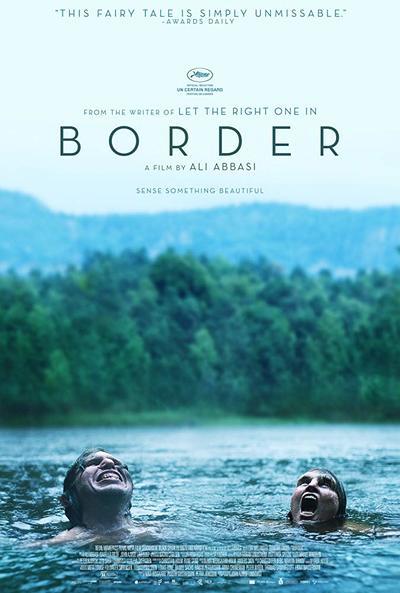 Writer (based on the short story "Gräns" by)