Last time on “Boo! A Madea Halloween,” Madea (Tyler Perry) and her elderly cohorts Aunt Bam (Cassi Davis), Hattie (Patrice Lovely) and Joe (Tyler Perry) matched wits with a bunch of trifling frat boys and the disrespectful high school senior girls who were trying to crash the frat’s Halloween party. The trailer promised comic scares but the movie provided none; it tipped its hand early to let us know that all of the supernatural happenings were pranks on Madea’s crew. Madea got her revenge by trapping the frat boys in a prison bus with big, burly prisoners just itching to sexually assault them. There was some moralizing in there somewhere, too, which is par for the course here in Tyler Perry land.

Your humble reviewer covered the prior film, and my biggest problem with it was that I had sincerely hoped to see Madea match wits with the actual monsters and killers from horror movies. After all, broad comedy and horror can yield entertaining features like “Abbott and Costello Meet Frankenstein.” If Madea were here right now, she’d scold me and tell me I should be “careful what I wish fuhrrr.” Because her creator has now blessed us with “Tyler Perry’s Boo 2! A Madea Halloween,” which adds more blatant horror elements into the mix. This time, it’s possible that the guy chasing Joe with a chainsaw might actually want to butcher him.

But I’m getting ahead of myself here. The first thing I should address is that damn title. “Tyler Perry’s Boo 2! A Madea Halloween” is not only unwieldy, it’s such a missed opportunity. I know Mr. Perry has seen “Breakin’ 2: Electric Boogaloo,” the film that contains the greatest subtitle every slapped on a movie. Had he named this film “Boo 2: Electric Boogaloo,” I would have given it four stars sight unseen. But Perry’s problems with sequel titles goes back to “Why Did I Get Married, Too?” You may think that kvetching about a title is a petty affair, but it can be the difference between box office success and failure. Just ask “The Hudsucker Proxy.”

Of course, Madea doesn’t have to worry about bad box office. She has a built-in audience of the faithful (and faith-filled) who will pack the seats on opening weekend. They will sit through all 104 minutes of “Boo 2!” not once demanding that Perry present them with something new or innovative. And that’s the problem. This is Madea’s tenth appearance in films, and no matter what the topic, she exists in a cinematic universe filled with numerous scenes of her just sitting there arguing with her people in a room. Granted, those scenes can be amusing, but you’d expect some visual potency by now from a man who has 45 directorial credits on imDB. Don’t get me wrong: Nobody is expecting Citizen Kane here. But would it hurt to make the film look presentable?

But I digress. You’re going to Madea’s house to laugh, forget your troubles and perhaps get a good Christian message. To Perry’s credit, he does a far better job of folding that message into the film than usual. Before we get there, however, we must contend once again with Madea’s niece, Tiffany (Diamond White), who, as in “Boo 1,” wants to attend a Halloween frat party. This time, she gets permission from her mother, Debrah (Taja V. Simpson). Tiffany is 18 and should be trusted more than her father Brian (Tyler Perry) allows. Tiffany walks all over Brian, and he’s such a wimp that it’s solely by the grace of God that Tiffany isn’t in Juvie Hall for murder. Brian is so out-of-touch that he has a petting zoo at Tiffany’s 18th birthday party.

Events in the first film caused a moratorium on frat house parties, so the frat decides to have their shindig at Camp Crystal Lake, or whatever Perry calls his haunted vista. Like in “Friday the 13th,” sex-obsessed camp counselors were butchered at this camp, leading to rumors that it not only may be haunted, but that one of the serial killers may still reside up there. It’s the perfect spot for a scary party, n’est-ce pas? Tiffany can’t wait to get up there to fool around with frat brothers who look old enough to be her father. One of the bros is supposed to be 20 but has a thick, full beard I can’t grow at 47.

When Madea gets wind that Tiffany is using Debrah to defy Brian’s order to skip the party, she and her crew spring into action. Unfortunately for Madea—and for the partygoers—something spooky awaits them. As soon as they get to the camp, they encounter a batch of ghouls with murder in mind. There’s a guy with a gas mask and a chainsaw, another guy with an ax and that hairy little girl from “The Ring.” Unlike last time, the killers are definitely not fraternity pranksters. They appear to have supernatural powers and the victims who can’t outrun them leave behind bloodstains.

I liked how Perry took some inspiration for the murderers’ attire from 80’s slasher films like “The Prowler.” I also liked that the final reveal of the killers’ identities made as little sense as it did in the slashers. “Boo 2!” could have benefited from better scenes of stalk-and-escape, but we are treated to several mildly amusing moments of Madea and crew reacting with fright at whatever befalls them. Since we don’t know how on the level these terrors are, “Boo 2!” comes off as more of Halloween-worthy than its predecessor. And yet, when Madea finally decides to “kick some ass,” the movie deprives us of just how wonderful that might have been.

Perry’s best scene as Madea is the funniest one in all of his films. While at a police station to report the creepy goings-on, Madea notices that she has a wanted poster on the wall. It looks like the one from “Madea Goes to Jail.” Madea tries to act inconspicuous so as not to draw attention, but she can’t help but be giddy about her reputation. She giggles like a schoolgirl over the youthful picture they used, and when Hattie points out that Madea is wanted for check fraud, Madea draws her attention to the litany of other crimes she’s wanted for on the poster. I laughed out loud before I realized this scene is the Tyler Perry universe in microcosm. These movies make a lot of money and are cheap and easy to make. Like Madea, Perry’s getting away with attempted murder. I can’t knock his hustle. I just pray I’m not living in a fool’s paradise hoping he’ll make some kind of masterpiece to show us critics how wrong we’ve been. 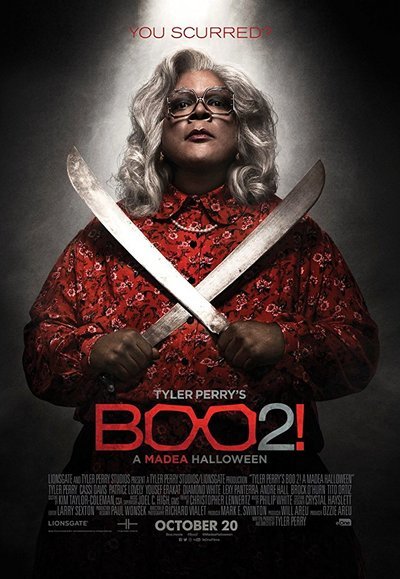