One of my fondest memories after a devastating breakup involves being laid up on the couch, watching endless streams of Bob Ross’ “The Joy of Painting.” There’s no media therapy like it—no TV series is so soothing and fulfilling without being repetitive, while including the little victories of seeing someone create and always move forward. He famously called mistakes “happy accidents,” a reassuring philosophy for anyone who considers fear to be the creative process’ greatest enemy. Bob Ross and his paintings are significant for that tidbit among others, and any time spent connecting with his work proves how much his calm nature, his artistic inclinations, and his optimism are not a novelty. But the merchandisers who have made millions from his name, long after his death, think he is exactly that.

Director Joshua Rofé ("Sasquatch") thankfully gives Bob Ross the human treatment he has long needed—it does no good for us, or for someone like a Bob Ross or a Mr. Rogers, for them to be talked about as if they were somehow beyond anyone else in the crowd. Instead, "Bob Ross: Happy Accidents, Betrayal & Greed" is a relatively enlightening documentary that humanizes a figure lazily written off as a novelty, sometimes by using salacious chapters in Ross’ legacy not well known. It’s certainly not common knowledge that an affair with a business partner might have been in the mix at one point, or that Ross fought all the way to his deathbed to keep the rights in the family. No, life is far more imperfect than what's seen in his paintings, and even the pursuit of painting landscapes for a public access show in Indiana can be poisoned by capitalist greed. Some people out there will see sunlight cresting through clouds over a wintry lake, and only see the color green.

Before it gets into that drama, Rofé’s fleet documentary (which has as many notable insights as a miniseries, all packed into 95 minutes) observes the story of Ross, illuminating the intricate conscience behind his persona. He was a showman, who learned how to make his passion for teaching painting into an accessible part for public television. One of the doc's many amusing details relates to where his soothing voice came from—a known flirt, Ross reckoned that his predominantly female audience would take to a softer tone that sounded like it came from the other half of the bed. Ross was a touchy guy too, and is described by his director Sally Schenk as “ornery” (though I wish she had shared what ornery jokes he’s made in the past).

In depicting this rise, Rofé touches on one person who was moved by Ross’ paintings and teaching methods—Annette Kowalski, who learned of Ross after suffering a traumatic loss. Kowalski also had a business sense for the Ross-based healing she experienced, and helped Ross gets his name out in TV, and then with painting supply products under Bob Ross, Incorporated. Rofé includes damning info about the Kowalski family's control while showing Ross became, as one headline called it, “a minor celebrity with a huge following,” and how his show “The Joy of Painting” inspired that joy worldwide. Power and control are far more evident in this saga than one might imagine, and the documentary efficiently depicts just how ugly it all got after he died in 1995.

"Bob Ross: Happy Accidents, Betrayal & Greed" has a fairly standard talking head and archive video approach, but it has an inspired variation on the common documentary storytelling method of animation or art. In this case, it’s how Rofé uses Bob Ross-like drawings to illustrate the shady dealings by the Kowalskis; to see shadowy figures, ominous office spaces, and images of phones that we learn were in real life tapped—things that Ross never painted—adds to the unsettling nature.

The saga's darker emotional notes are especially felt in interviews with his son Steve, who used to be on the "The Joy of Painting," even when he clashed with his father. Steve now sits in Florida with a face and voice just like that of his father’s, and has yet to receive any money from Bob Ross, Incorporated. He addresses the scandals and emotional turmoil with an openness that the documentary frames as particularly brave, given the dozen subjects who rejected talking on camera for fear of legal retaliation.

Throughout, "Bob Ross: Happy Accidents, Betrayal & Greed" balances its advocacy of Ross' philosophy with a strong discouragement of any modern financial support of the mints, shirts, and Chia Pets etc. made from it. It feels particularly jarring to go from feelings of outrage to then support, as if it doesn’t have a more poignant idea about bad people bulldozing over those with far better intentions; it does, however, effectively make sure that we do not see any part of the Bob Ross legacy as simply cute. The film made me re-appreciate the black lines he'd boldly cut through his peaceful landscapes, only to turn them into trees that gave more depth to the bigger picture. It also made me want to find the most ethical way of watching Bob Ross episodes again, without supporting Bob Ross, Inc. 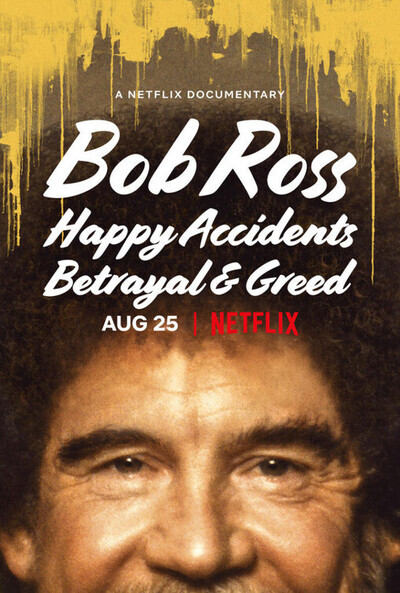 Bob Ross as Self (archive footage)