“Blue Story” made headlines in the U.K. after a screening in Birmingham was accompanied by an outburst of violence, leading to panicked theaters pulling the film across the country and the appropriate cries of racist overreaction that resulted. It reminded me of some of the responses to films about violence in Black communities in the ‘90s like “Boyz N the Hood” and “Menace II Society,” films that undeniably influenced this one. However, what’s unusual about “Blue Story” is how much it pushes through the tropes of the genre almost by leaning into them. “Blue Story” isn’t content with being a cautionary urban drama, going a step further to become Shakespearean tragedy, both in its extreme violence and even the presence of a Greek chorus of sorts—Andrew Onwubolu, aka Rapman, not only wrote and directed “Blue Story,” he pops up every now and then to narrate it directly to the camera with an engaging screen presence and rhythm. It’s these little touches, along with the talent that Rapman displays as a filmmaker, that keep “Blue Story” humming past and even through its clichés.

“Blue Story” depicts actual gangs in Peckham, a southern borough of London that has been torn apart by gang violence, and incorporates some elements of Rapman’s young life in Deptford. It’s about two young friends named Timmy (an excellent Stephen Odubola) and Marco (Micheal Ward) torn apart by gang allegiance and territorialism. It starts simply with Timmy falling in love and Marco getting pulled deeper into his gang by a violent older brother. As Timmy becomes more compassionate, Marco goes in the other direction, and it leads to inevitable tragedy, which then completely shifts the back half of the film into a story of vengeance and, most of all, cycles of violence and trauma. When one gang retaliates against the other, it merely spawns the need for an escalated retaliation in the other direction, and so on and so on.

Rapman keeps his movie pulsing with a heavy degree of slang, some of which may be familiar to people in the area of Peckham but is so unique for American audiences that the film is even subtitled to make sure you catch them all. Gang members throw around insults like “pussios” and threaten to “wet someone up” (with blood). “Blue Story” very rarely catches its breath, almost as if its mimicking Rapman’s delivery style in cinematic form. Rapman shot and filmed his own YouTube series called “Shiro’s Story” and it became a viral hit, viewed over 21 million times. He has an undeniable filmmaking energy, keeping his characters and camera constantly moving, conveying a restlessness in them that does more than even the slang or plotting. “Blue Story” always feels like it’s in motion, even when the characters are just spitting slang back and forth.

There are times when the familiarity of the urban melodrama hurts “Blue Story,” particularly in the lack of depth to his characters. (Odubola is a find, but the rest of the cast has some actors who feel a bit amateur.) We’ve seen Timmy and Marco a hundred times before, although I think that’s something Rapman would partially agree with in that he’s trying to tell a story of about the commonality of gang violence as much he’s telling a distinct story. The way Timmy and Marco’s lives are shattered by street warfare and people who resort to violence is being reflected around the world in communities torn apart by gang culture.

Other than introducing new slang into the lexicon (at least to me), “Blue Story” doesn’t really do anything new, but, again, Rapman would probably agree. This is urban melodrama not by way of John Singleton or Spike Lee but by way of classic theatrical tragedy, complete with an in-scene narrator and a high body count. And yet Rapman also imbues it with his own distinct, edgy style. There was a sense that too many of the films that followed in the way of Singleton and Lee’s breakthroughs lacked honesty—they were merely using the tropes to ride a trend. The worst of them even felt like exploitation. There’s none of that here. It may be rough around the edges and a bit shallow at times, but no one can deny its passion.

“Blue Story” is a film that I think would have gotten some attention stateside with its March 20th wide release, now turned into a VOD release only. But given how Rapman developed into a sensation in his country because of home-produced YouTube content, there’s also something that feels right about people finding and sharing his new work while stuck at home. I have a feeling a lot of people will. 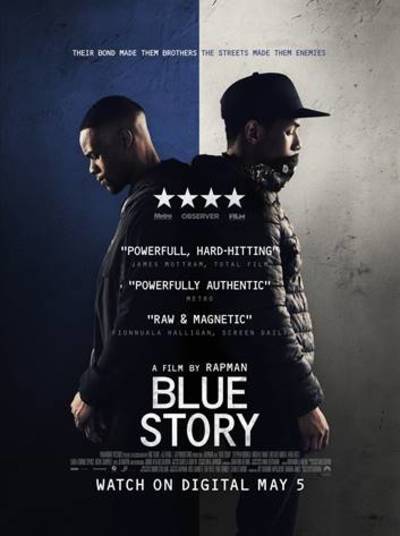 Rated R for violence and language throughout, drug use and some sexuality.