To be quite honest, I do not know why you are even here. Nothing I say, pro or con, is going to alter your desire to see “Black Is King,” especially if you are a fan of its star and creative force, Beyoncé Knowles-Carter. Even if you are not, it’s been hyped six ways until Sunday, all but ensuring a sense of “fear of missing out” if you do not tune into Disney+. Besides, the written word cannot completely relay the experience of watching it. Reviewing a visual album is like reviewing a stand-up comedy movie—offering a play-by-play of the material simply won’t do it justice. All I can do is offer an opinion and leave you to your own devices. But I’ll try anyway.

The sole fact I can report is that this is inspired by the album The Lion King: The Gift, which in turn was inspired by last year’s remake of “The Lion King.” However, “Black Is King” worked best for me when I was able to forget it had anything to do with Simba and company. Still, the way Beyoncé melds this film’s imagery in the closing number with “Spirit,” her contribution to “The Lion King”’s soundtrack, gave me a newfound appreciation for the song. It begins with Beyoncé, clad in yellow and standing in a beam of light emanating from a church window, singing the opening verse. When the camera pulls back to reveal a choir decked out in a complementary color, the image has the reverential pull of a Sunday service. The vocal harmonies coupled with the striking fashion design by Zerina Akers bring forth a visual and aural exaltation.

As its title suggests, “Black Is King” is a celebration of Black culture and Black people, where we came from, where we are, and where we are going. It’s a tribute to our ancestors, ourselves and our contemporaries on both sides of the Atlantic. As a result, several songs showcase a slew of African musical collaborators like Tekno, Yemi Alade and Mr Eazi along with American artists like Pharrell, Childish Gambino and the Carter half of the Knowles-Carter empire, Jay-Z. The music ranges from rap to gospel to a haunting lullaby delivered by Beyoncé as her character provides narrative context for the earlier, gorgeous homage to Moses that opens the film.

The stunning visuals that permeate every frame arrive courtesy of a crew of spectacular cinematographers, each of whom brings a different yet cohesive look to the set pieces. We are in the desert; by a winding river; cruising in a car through the neighborhood; in outer space and in a series of interiors, each more awesome than the last. On occasion, a familiar face fills the frame—fellow Destiny’s Child Kelly Rowland, Beyoncé’s mother, Tina, Naomi Campbell and, in the film’s catchiest number, “Brown Skin Girl,” Lupita Nyong’o and Blue Ivy Carter. Everyone looks fantastic, their skin radiant and their attire flowing in a tactile grace. If nothing else, “Black Is King” is a jaw-dropping visual achievement.

Poetry by Warsan Shire and dialogue from the “Lion King” remake form the bridges between songs and the narrative structure, what little there is, very loosely follows the story of Simba taking his place in the Circle of Life. As we hear through the tracks on “The Gift,” Beyoncé and her co-directors provide scene after scene of representation, with our people appearing as kings, warriors and others in control of their destiny. Every shade and hairstyle gets its own fashion magazine-style layout or shout-out, to the point where you want to pause the movie to stare and marvel with envy.

Meanwhile, our tour guide and lead singer is chased, encircled, and tailed by the camera as she takes center stage or cedes the spotlight to her musical co-conspirators. She’s in great voice here and handles what appears to be seven million incredible costume changes with preternatural ease and finesse. The outfits and set design are as choreographed as the dance numbers that fill them with the geometric shapes made by the dancer’s bodies. Again, the true joy of “Black Is King” is in its images.

This is all fine and good, but what does it all mean? As with “Lemonade,” Beyoncé trusts that you will piece together and interpret the message based on your own experiences and the breadcrumbs she leaves for you to follow. I think “Lemonade” is the more satisfying and cohesive feature, partially because the Disney tie-in here was always a bit clunky, even on the album, and it adds a somewhat superficial layer to the proceedings. Regardless, viewers will be thankful that this particular spirit moved the makers of “Black is King” toward creating a very watchable and highly recommended inspirational piece of art. 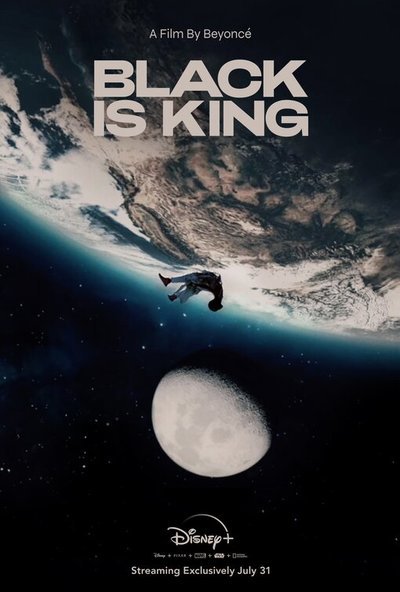