It’s almost impossible to predict when and where a new star will burst onto a scene. There are so many hopefuls vying for a spotlight, so much talent goes unnoticed. But documentarian R.J. Cutler lucked out when his cameras caught the astronomical ascent of electropop star Billie Eilish. He enters the picture just as Eilish is still creating music with her older brother, Finneas O'Connell, in his room. Men from their record label stop by to hear what’s in the works, and they smile politely, unaware how big that small moment in the O’Connell’s home will become. We’re seeing a then-17-year-old Eilish change her style, come into her own and demand control of her image, right down to directing her own music videos. We’re watching the birth of a star, an exhilarating and sometimes excruciating experience.

Cutler’s “Billie Eilish: The World's a Little Blurry” only briefly spends time looking at old home movies from the singer’s childhood. The precocious home schooled siblings grew up with instruments in the house, and with dad’s music lessons and mom’s songwriting tips, started making their own tunes. Eilish’s doting, free-spirited parents, Maggie Baird and Patrick O’Connell, look on in proud moments and comfort her in tougher ones. They wax on about their daughter, her generation and how quickly kids grow up as a kind of running commentary throughout the film. At 13, Eilish released her first single on SoundCloud, where she found her first several hundred listeners. Now, her Spotify page lists hundreds of millions of streams. In-between tour dates and everyday teenage milestones like getting a driver’s permit, Eilish and her brother work out the songs for her debut album “When We All Fall Asleep, Where Do We Go?” Cutler’s film takes fans back to the early days of some of her now-established hits, like a behind-the-scenes glimpse into the O’Connells’ collaborative process. But these are not the film’s only intimate moments. The film also documents Eilish’s candid thoughts about mental health and her fans, a dynamic she deeply cares for but recognizes its demands on her. There’s an anxiety that bubbles up at different parts of the documentary over how people will react to her work or how she behaves. The documentary also captures a relationship that fizzles out and how it affects her both backstage and on-stage. It records her fangirl reaction to meeting personal heroes like Justin Bieber, someone she loved so deeply as a kid, her mother mentions they almost took her to therapy over her crush.

The documentary follows her successes with some of the harsher realities of the job. Forced out of the dance world because of an injury, it’s a painful specter that continues to haunt Eilish physically and emotionally. The injury is a situation dire enough to challenge her desire to perform full-out for her fans. It’s one of the more dramatic moments of the documentary. The film itself takes a fly-on-the-wall approach to its subject, observing her from a distance even when in the same room. Already at this age, Eilish is introspective about a number of issues in her life and doesn’t seem to need much convincing to open up about herself. She’s frustrated by criticism and tech problems, anxious about performing for big crowds, ready to share old doodles and writings about self-harm from old notebooks. Subtly, her clothes, hair and nails change in the lead-up to the release of her first album. It’s a transformation without calling attention to it, the daily evolution of a young person growing into their own.

While the documentary is rich in detail and access to a star, it’s overburdened by too many side scenes and candid outtakes. I’m sure fans would want to see a longer cut of the movie, but the film itself can sometimes feel like it meanders off, squeezing in a random tour shot here, another scene of Eilish goofing off there. The core drama and story is there, but a few scenes don’t add to the narrative, only extend it.

Eventually, the documentary picks up in the run-up to the 2020 Grammys where Eilish would take home the gold for Best New Artist, Record of the Year, Song of the Year, Album of the Year and Best Pop Vocal Album plus write and record a song for the still-to-be-released James Bond film, “No Time To Die.” It’s the perfect high note to end on, an abbreviated memory of the Before Times ahead of the pandemic. It’s also the point of her career where Eilish remains: with all the promise of a bright and shining career still ahead of her. 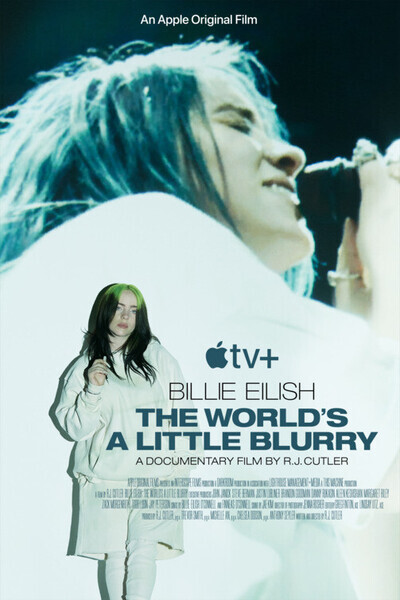 Billie Eilish as Self

Finneas O'Connell as Self

Maggie Baird as Self

Patrick O'Connell as Self