Pete Davidson has only just started playing lead roles in feature films, and he has already achieved a mythic silver screen presence. Later this year, we’ll see him play a version of himself in the Judd Apatow studio project “The King of Staten Island,” and this week we see Davidson as a different type of legend, playing the funny, slightly older screw-up you looked up to when doing your own growing up. You know: the charismatic figure you thought had it all figured out because they partied through the good and the bad. But then you get slightly wiser, and you see what that person doesn't have in their life, how no-rules coolness is just Monopoly money when the party is over. It’s a common wake-up call experienced by numerous film characters, and writer/director Jason Orley at least makes us laugh and relax before getting to obvious reasons about why you shouldn’t want to be like Davidson's chaotic slacker Zeke.

But Mo (Griffin Gluck) doesn’t know this lesson yet, because he’s in high school. Mo looks up to Zeke as if he were the coolest older brother, even though Zeke is the ex-boyfriend of Mo's sister Kate (Emily Arlook). Mo is a decent kid, relatively plain, and that makes him highly susceptible to influence. As he hangs out with Zeke more and more, spending time with Zeke’s drinking and smoking buddies, Mo unknowingly but willingly mutates himself into Zeke. First it’s when Mo repeats Zeke’s jokes, then it’s when Mo tries out Zeke's crude strategy in order to get a classmate Sophie (Oona Laurence) to want him back.

It’s a highly unusual friendship, but the chemistry between Gluck and Davidson help make it seem like a believable anomaly. Davidson’s Zeke is the constantly amused devil on the shoulder of Gluck’s high schooler Mo. And because Mo wants to be popular, Zeke essentially pushes him to sell drugs to the older rich kids at their weird themed parties. It's just one of many things that Zeke normalizes for him, and in turn sets Mo on a path of destruction.

With his feature debut, Orley presents himself as someone who knows this world of suburban kid basement parties well, but also as a storyteller interested in the dynamics to be found in these two slackers of varying levels. In particular, it becomes apparent that even though Zeke is introduced as a goofy god, Zeke needs Mo just as much to help make himself look cool, too.

This creates a sizable symbiotic bond that the movie lives and dies on, and "Big Time Adolescence" often hits a strong beat anytime it builds backstory to make it about how their backstories inform their need for each other. But Orley’s script cheats itself out of any major emotional impact. As strong as it may to be start hanging out with them, basically anyone watching this movie would know that this kind of life gets old fast; some urgency is given to the film by tender performances from Jon Cryer (as Mo's dad) and Oona Laurence (especially when her character Sophie realizes that Mo nonetheless walks and talks like a jerk). Watching Mo learn all of this feels more obvious than usual for a story about arrested development—of course the fast life will lead to loneliness—because Orley doesn’t offer any sense earlier that he's much interested in shaking things up.

But Orley has enough jokes and heart in “Big Time Adolescence” to recommend it as a comedy, getting laughs from character work (Davidson’s hyper-active performance especially), little gags in the background, and abrupt cuts that create their own punchline. And the supporting cast stands out too—there's a liveliness whenever Zeke, Mo, Nick (Machine Gun Kelly), Danny (Omar Brunson) and Holly (Sydney Sweeney) are in Zeke's pit of an apartment together, even if you don't want to drink whatever they're drinking. Orley is also constantly mindful for framing and how characters fit into an image, giving the movie’s hangout scenes a sense of being loose in story, but considered visually. Even when "Big Time Adolescence" starts to become ordinary, it always has a freshness from its on-screen talent, and from the promise of Orley’s directorial eye. 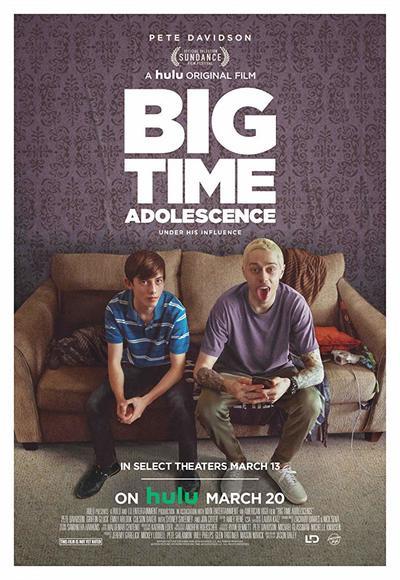