In addition to having an "Airplane!" style exclamation point in its title, "Big Ass Spider!" delivers its creature as advertised. That's what you paid to see, and you already know if you want to see it, if you share my love for nature-gone-amuck horror movies, a love that arrived the day I saw "Food of the Gods" at the drive-in with my parents. Since then, I've copped to enjoying movies like "Anaconda," "Deep Blue Sea," "Snakes on a Plane," and even the ABC Movie of the Week "Curse of the Black Widow." That one had a horny Patty Duke turning into, you guessed it, a big ass spider.

I'm especially fond of vengeance-seeking insects, so this seemed right up my alley. I attended the midnight showing here in New York City, a screening hosted by Lloyd Kaufman. Kaufman is the president of Troma, the studio whose fans are the target audience for "Big Ass Spider!" (Full disclosure: Not a lot of people showed up.) A filmmaker sitting in my row sought Kaufman's advice on moviemaking. Apparently the guy had written a movie about big ass horseshoe crabs. As Kaufman and his wife enthusiastically answered his questions, I thought of two of my own: "What the hell can those pathetic looking horseshoe crabs do to a person?" and "When can I find out?"

This is the mindset you must have if you want to get anything out of "Big Ass Spider!" But "Big Ass Spider!" has a big ass problem: It thinks you're better than the material. It falls far too often into the "wink-wink-nudge-nudge" self-awareness that makes movies like "Sharknado" intolerable. Don't get me wrong: It's perfectly fine for a genre picture to wink at its audience, but I've grown weary of this new subgenre whose sole existence is to tell you it's in on the joke. They're so afraid you're all gonna laugh at it that they fire distracting pre-emptive strikes: "Yes, we KNOW this is bad!" It's a cinematic self-fulfilling prophecy.

Had "Big Ass Spider!" solely been that kind of movie, I would be dismissive rather than disappointed. But this film is crafted with far more love and devotion than the standard Syfy creature of the week movie. It's a horror comedy, and there are moments that work in both categories. Director Mike Mendez (who also edited) has made a decent looking movie on a low budget, and some of his sequences and shots are intriguing and effective. The first scene of the film, done as a flash-forward moment, is visually arresting. An early spider attack featuring a janitor is edited and shot particularly well, with a long shot of the attack played out both in front of us and as shadows on the wall.

For a good comedic example, there's a scene where our exterminator hero Alex Mathis (Greg Grunberg) is chasing a littler version of the Big Ass Spider! through a hospital ventilation system. Crawling through the ducts, Alex communicates with his new sidekick Jose (Lombardo Boyar), a security guard serving as his vent system GPS. When Alex encounters a web left by the spider, he marvels at its intricacies and its strength. When Alex's flashlight goes out, he strikes his lighter. This causes his web-covered hands to erupt in huge balls of fire. Grunberg's reaction, and the sheer ridiculousness of the special effects fire, made me laugh harder than I've laughed at the movies this year.

The biggest star here is Ray Wise, who plays a military agent trying to catch the big ass spider and keep things on the hush-hush. Rather than commit to the material like Leslie Nielsen, he looks like he knows this is a bunch of B.S. (Wink-wink, audience!!) Wise is joined by a scientist whose lazily written dialogue is also an audience pander. I missed the overcomplicated science gobbledygook these characters spout. That element of fun is missing from "Big Ass Spider!" I'm still not sure how the damn thing got into the body it explodes out of in the opening reel.

When the Big Ass Spider finally lives up to its name, it goes on a rampage in Los Angeles. These rampage scenes would be more fun if they weren't verbally telegraphed earlier by Wise and company. B.A.S. runs wild, chewing on scantily clad women, police officers, overweight people, helpless seniors…and Lloyd Kaufman. King Kong-like shots of the spider atop the US Bank building in L.A. are intercut with Alex and Jose racing to save Karly and what's left of Los Angeles. This Battle: L.A. is too easily resolved, but I could live with that. However, the last scene of this movie, which I'll not spoil, made me shake my head. (Nudge-nudge, audience!) 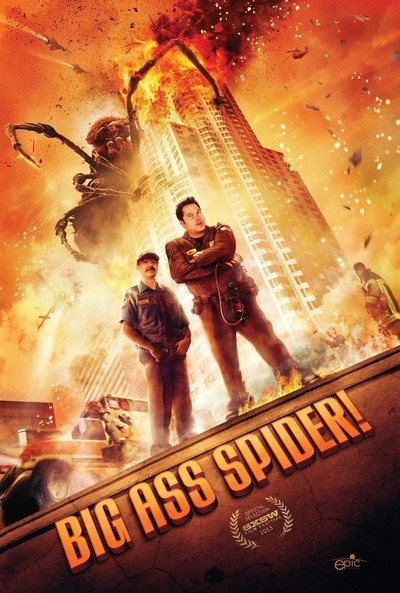