Between Two Ferns: The Movie

“Between Two Ferns: The Movie” is one of the most amiable comedies of the year, even if it includes a joke where Zach Galifianakis asks a question out loud about Benedict Cumberbatch’s unusual mug—right to the Oscar-nominated actor’s face. A question like that is in such poor taste that it’s ridiculous, and that’s exactly why it's funny. It’s all within the greatness of Galifianakis’ long-running "Funny or Die" web series, which uses a fern-adorned talk show set for an insult comedy trap, with famous guests (past episodes have included Charlize Theron, Bradley Cooper, Tila Tequila, President Barack Obama, et al) who don’t know what they’re in for. It’s antagonistic comedy that’s brilliantly designed so that nobody actually gets hurt.

Director Scott Aukerman (co-creator of the original show) takes what's made the series so extremely funny and lovingly expands it into a feature film, in a way that would make all those ‘90s “Saturday Night Live” movies envious. Aukerman (with co-story credit going to Galifianakis) gives fans what they want, and then wraps it up in a sweet, fleet story, where the awkward comedy becomes accessible, if not bizarrely charming. Its main narrative about a ragtag team on a road trip can’t compete with whenever Galifianakis is sitting between his two ferns, but then again, nothing else from a comedy this year will likely be able to top it, either.

Without going deep into his psychosis, Zach is painted as an underdog, whose obsession with attempting to tear down famous people is what makes him a lovable dummy, instead of plainly toxic. He doesn’t have the same innate need in real-life talk show hosts to uphold celebs, which renders the premise even funnier—Zach dreams of being a “big network TV personality” like Jay Leno, but is stuck doing his show for southeastern North Carolina public access. Will Ferrell (playing himself as a sleazy Funny or Die head honcho) offers to make that a reality, but only if Zach can deliver ten episodes within two weeks. Ferrell knows the appeal of Galifianakis—“People are laughing at him, not with him”—and that it can get him clicks, which Ferrell talks about with the same zeal as cocaine.

After the TV station is destroyed during a freak plumbing accident (which happens not long after Zach asks Keanu Reeves if he knows more than 18 words) Zach ventures across America to bring the interviews to the celebrities, including the likes of Paul Rudd, Tiffany Haddish, and Jon Hamm. Joining Zach and his beloved two ferns are his small TV crew, played by Lauren Lapkus, Jiavani Linayao, and Ryan Gaul—rising funny people in real life. As the plot moves them from city to city, their brief bonding scenes prove funnier than your average improv-driven studio comedy, thanks to the film's unpredictable sense of humor. In one stand out moment, “Between Two Ferns” sneaks in a hilarious throwaway line from Lapkus about Jake Gyllenhaal, and then right after that, Chrissy Teigen makes a mind-blowing reference to Richard Kelly’s “The Box.” "Between Two Ferns" zips from one joke to the next, without ever looking like it's trying too hard.

Aukerman, making his directorial debut, shows his directing chops by harnessing a tricky tone and a quick pace, one of the most impressive things about the whole project. He has an inspired touch with the group comedy—there’s even a funny way it gets through the “the band breaks up” beat that leads into the third act—and the story is genuine with its small emotional stakes. And though Zach's interviews sprint to the line of cruelty, Aukerman’s film is about loyalty to others and one’s self, even if you’re a clueless comedian who loves their ferns more than any fellow human being.

“Between Two Ferns: The Movie” has as many stars as a 1930s MGM revue, and it has the structure of such a musical, too. The interviews don’t develop the plot so much as fulfill their desired spectacle of hilarious awkwardness, and they constantly gave me the kind of big laughs that make one’s day better. Mixed into the story, these scenes are cut even shorter than the approximately five-minute online episodes, but are just as abrasive, making the celebrity appearances potent as they are funny. It all has the same effect as the web series too—you’re eager to rewatch certain moments, if just to see what you might have missed the first time because you were laughing so hard.

But Aukerman’s feature adaptation offers something that brings the joke full circle, and is new to “Between Two Ferns”—outtakes. During the credits, Galifianakis and his guests both break character and laugh about the ridiculously mean thing Galifianakis just tried to say. There’s a special, welcoming sensation in seeing celebrities we love being able to take a joke that cuts deep, and then laugh hard about it. “Between Two Ferns” has mastered such bliss. 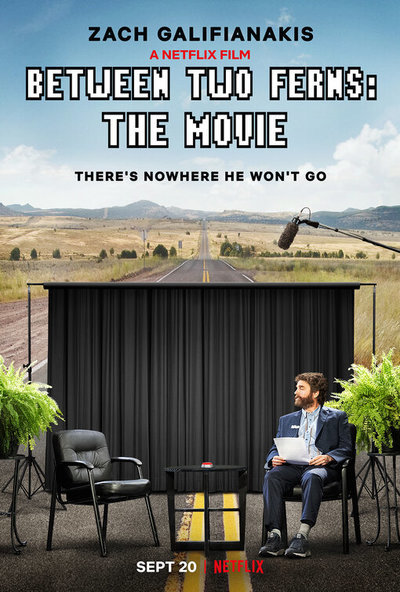 Zach Galifianakis as Himself

Will Ferrell as Himself

Benedict Cumberbatch as Himself

Brie Larson as Herself

Matthew McConaughey as Himself

Peter Dinklage as Himself

Paul Rudd as Himself

Tiffany Haddish as Herself

Keanu Reeves as Himself

Jon Hamm as Himself

Jason Schwartzman as Himself

Adam Scott as Himself

John Cho as Himself

Chance the Rapper as Himself

Hailee Steinfeld as Herself

John Legend as Himself

Chrissy Teigen as Herself

Tessa Thompson as Herself