"Best Man Down" is billed as a "warm and funny comedy," a subjective description with which I do not agree. I would not consider this a comedy, let alone a warm and funny one. There are no laughs, and most attempts at humor are mean-spirited or embarrassing. The dramatic elements fare no better, as "Best Man Down" merges a road trip through northern Minnesota with a subplot about a 15-year-old girl forced by her drug-addled Mom's boyfriend to steal ingredients for crystal meth. The film begins with a rather bloody death and ends with the aforementioned 15-year-old explaining, in a long eulogy, why we should care about the deceased. Between these two scenes is a very disjointed, confused, and sloppy movie.

Lumpy (Tyler Labine), the doomed best man in "Best Man Down", spends the opening credits being an obnoxious, drunken ripoff of Zach Galifianakis. He spills tequila on the $3,000 wedding gown worn by the bride, Kristin (Jess Wexler). He dances on tables, pukes in the ladies' room toilet and, according to Kristin, hits on a 14-year-old girl. Lumpy is the reason God made bridezillas, the control-freak reality-show women who employ draconian methods to ensure a perfect wedding. Lumpy's unpleasant antics eventually get him politely ejected from the wedding by the groom, Scott (Justin Long). Lumpy is Scott's best friend and, according to dialogue peppered throughout the film's early scenes, in dire need of an intervention. He gets a divine one.

Back in his hotel room, Lumpy executes an ill-advised air-guitar move, cracking his head open in the process. Covered in blood, Lumpy stumbles outside looking for help. He dies after falling on a cactus, a detail the movie mentions multiple times. I doubt Lumpy's death itself is supposed to be funny, but it serves as the catalyst for cringe-worthy, horrific attempts at humor. What Kristin does to Lumpy's rigor mortised, erect cadaver will clue you into the comedic level employed throughout "Best Man Down."

Lumpy's death sends Scott and Kristin back to Minneapolis to plan Lumpy's funeral. It appears Lumpy had no other friends besides Scott, nor any family members who would be expected to handle burial decisions. Otherwise, why would the duo cancel their honeymoon and spend money they do not have in order to do this? As an example of just how sloppy "Best Man Down" is, writer-director Ted Koland introduces Lumpy's mother during the funeral scene. The film spends crucial amounts of runtime trying to find a mysterious person in Lumpy's phone because he supposedly has no next of kin. Instead of being involved in scenes with Scott and Kristin earlier, Mom is trotted out as an insulting grasp for sympathy in the final minutes.

To provide backstory on Lumpy, "Best Man Down" introduces us to the mysterious name in Lumpy's phone, a 15-year-old girl named Ramsey Anderson (Addison Timlin). She's surrounded by meth culture stereotypes played by Frances O'Connor and Evan Jones. Jones's character serves as the obligatory element of danger, brandishing a gun and barging into Ramsey's room clad just in his underwear. I was confused as to the relationship between Ramsey and her Mom's paramour, and "Best Man Down" can't support the implications it creates. These scenes belong in an entirely different movie, one that might air on Lifetime with a title like "Mother, May I Make Meth With Your Man?" How Lumpy and Ramsey are related I'll leave you to discover, but "Best Man Down" needs both flashbacks and a big speech to explain it.

"Best Man Down" has enough familiar actors to generate viewer interest, but I wonder what they saw in this screenplay. Lumpy is supposed to be Scott's best friend since junior high, but It's clear Scott knows not one of the details best friends would know about each other. As he learns more and more ominous things about Lumpy, Scott reacts in annoying, whiny waves of denial. Long is unconvincing as Scott, but nowhere near as bad as his fellow-surnamed actor, Shelley Long.

As Scott's mother-in-law, Shelley Long portrays an embarrassing mother stereotype prone to saying the wrong thing at the wrong time. The film looks at her with the same disdain it reserves for Jones's meth dealer. Clad in glasses that look obtained from a pimp's optician, Long rambles on about how her daughter can sue the hotel for providing Lumpy with the alcohol that supposedly led to his demise. She also kicks off an argument between the married couple that may be the worst use of product placement I have ever seen. Mrs. Dash, if you paid for this, you deserve a refund.

"Best Man Down" would have been a much better feature had Koland simply told his story with all the familiar trimmings we've come to expect. The familiar doesn't automatically translate into bad filmmaking. Instead, the extraneous subplots and characters serve solely as unsuccessful means of distinguishing the film from its similar subject brethren. They all clash against each other, repeatedly shifting the film's tone.

"Best Man Down" ends with a huge speech that explains everything, a speech that could have been given 20 minutes into the film. Had Ramsey been this forthcoming when she met Scott and Kristin, it would have saved the characters, and us, a lot of wasted time. 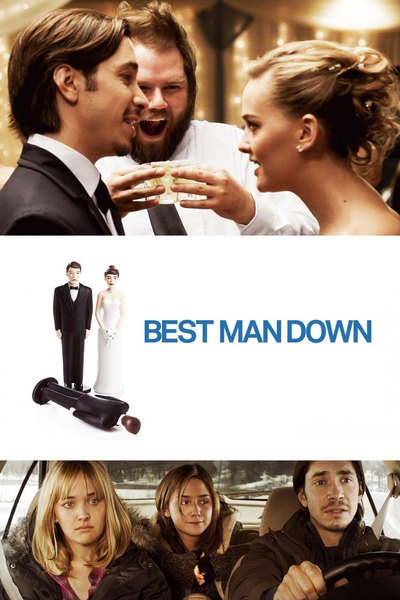