Best and Most Beautiful Things

With a documentary as flabby but well-meaning as “Best and Most Beautiful Things,” you have to savor the small stuff. For one, I'm glad this documentary introduced me to Michelle Smith, a young woman from Bangor, Maine, who is a lot like me (and probably you) in various ways. She connects to the dry misanthropy of MTV’s “Daria,” belts out Jenny Lewis songs in the car and doesn’t identify with “normal.” However, in a way that she is not like me or your probably you, she is legally blind and has Asperger’s, making her interactions with the world as unique as they can be particular. But the power of her narrative is that Michelle wants what anyone else does, to connect with people through the things she loves, and to grow up as her own person in the process.

“Best and Most Beautiful Things” is a film with a subject that it achingly wants to share, but has little idea how to best talk about it. In the first act, the doc makes a point to indicate just how much Michelle loves “Daria” (dressed up exactly like the title heroine and quoting her in one memorable shot) but then shows Michelle at an anime convention talking about “Neon Genesis Evangelion”—creating a blob idea of Michelle as a young woman with specific tastes. Her family is also given a lot of focus, and despite their own personal struggles as a divorced group with a tragedy in the past, it amounts to little emotionally.

Charting Michelle from her last days at the Perkins School for the Blind in Watertown, MA to taking on the real world as an independent woman, there's a half-baked idea pitched to her by someone at the school about her going to LA for an extensive internship lead by someone associated with Nickelodeon show "Rugrats.” Like any of us might do, the opportunity blossoms in her head as a chance to become a voice actress, permanent Los Angeles resident, maybe a star. But even though that becomes the only "goal" we are witnessing in a documentary that charts out its narrative course with intermittent graphics, this half-baked promise becomes quarter-baked within the film, as director Garrett Zevgetis’ doesn't investigate the many logistics behind this too-good-to-be-true scenario.

As it is here, "Best and Most Beautiful Things" doesn’t go deep into what she does that could be considered normal or not normal; it can merely document her doing regular things, like attending classes at her school or sitting in bed with her boyfriend. Most defeating of all, it doesn’t delve into the world of kink. Michelle exclaims about a whole world that’s been opened up to her, and the documentary hardly talks to anyone about it or presents a deep look at something so important to her. The film is always limited at observing, albeit with emotional distance.

Zevgetis also has too many cinematic ideas that don't fully develop, like when images don’t match up even emotionally with their accompanying voiceover. Camera lenses with very shallow focus are often used with similar motivation, an obvious gesture towards Michelle's own vision. But not only is Michelle's vision worse than just a blurry frame except for what's in the center, the lens usage seems to have no poetic consistency. As it turns out, sound design prevails the most when trying to reach the viewer's non-visual senses, like a close-up of a high-five delivered to one hand as another hand roller-skates by, or the cacophony of a high school basketball game.

And though much of Michelle seems cluttered by the story, she's considerably more poignant than the documentary about her. “Everyone can relate to each other in one way or the other,” she says at the very end of the film. “And that’s something very beautiful and it’s good to think about whenever you’re thinking you’re alone in the world. And trust me, if you think you’re all alone, think of how many other billions of people think they’re alone. Six billion, to be precise.” I couldn’t have said it any better. 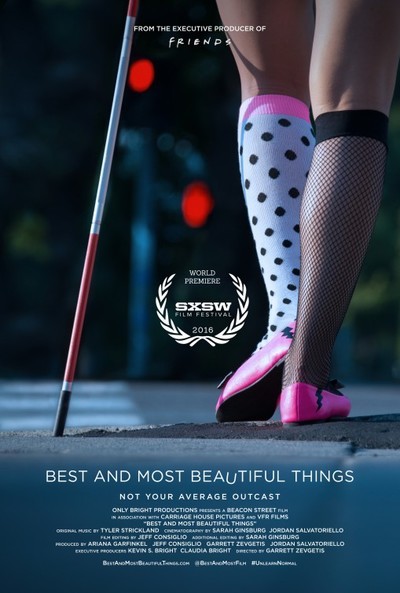 Best and Most Beautiful Things (2016)