HBO’s “Bessie,” premiering Saturday on the network, is a flawed drama that nonetheless warrants a look simply because of the bright spotlight it gives the underrated talents of star Queen Latifah, who does quite easily the best work of her career here. This sexually-charged, intense look at Blues icon Bessie Smith often feels defiantly episodic, as if co-writer/director Dee Rees is purposefully trying to sketch a portrait of a life in incomplete brush strokes, but Latifah, who is in nearly every scene, never falters in her portrayal of a woman who was too edgy, too real, and too tough to be famous before the world came crashing down around her.

In the first full scene of “Bessie,” the title character (Queen Latifah) is getting hot and heavy in an alley when her paramour goes a grope too far and starts to get violent when she refuses. She does not give in, grabbing a glass shard off the pavement and stabbing her attacker, before going on stage to sing a number. Bessie takes no shit from anyone. Even those who would offer her good advice or further her career are often pushed aside by pride and ego as much as artistic integrity. Across most of “Bessie,” we see the title character confronting authority, patriarchy, the white male establishment, etc. She is presented with an opportunity to find a broader audience but compromise—she refuses. She encounters a violent KKK sect trying to shut down a performance—she meets violence with violence. In one great moment, Langston Hughes warns her to “play” to her white, snooty crowd before she heads into a party to perform. She shoots him down with a glance.

Bessie Smith was a vaudeville smash in the 1920s, successful enough to have her own train on which she toured the country, and to inspire Nina Simone and Billie Holliday. She rose to fame purely through talent and sheer will, but demons like addiction and the ceiling she eventually hit by refusing to bend to the will of white producers kept her out of the spotlight, and even sunk her so low that her family was threatened. “Bessie” hides none of Smith’s demons or resilience. Reportedly in the making for 22 years from a script by Horton Foote, it’s easy to see why “Bessie” was a film inevitability. This is a great story of a relatively unheralded talent.

And everyone involved should be grateful that Queen Latifah agreed to take on this challenging role, one that she had reportedly been circling for over a decade. She is powerful, fearless, and, when needed, vulnerable in a role that could easily win her an Emmy and a Golden Globe. Criticisms of “Bessie” fall away when this performance is considered, especially when one balances the emotional intensity of the final act with the bravado of the first two. Bessie never feels like a dramatic creation; she resonates with truth, whether it be in the longing that led her to multiple affairs (including ones with characters played by Mike Epps and Tika Sumpter), or in her downright allergic reactions to what she saw as fakeness in her profession. Blues legend Ma Rainey (Mo’Nique) tells Smith early on, “You got to put something else in it. The blues is not about people knowing you, it’s about you knowing people.” Queen Latifah really got to know Bessie Smith in ways that other actresses couldn’t have.

Sometimes scripts that have been around as long as “Bessie” get over-worked, over-edited, over-analyzed to the point that they lose some of that screenwriting “magic.” The first half of “Bessie” feels a bit too calculated, too episodic in a way designed to give Latifah and her co-stars (including the great Michael K. Williams) the right number of big moments without linking them together in the arc of a life. And regular TV cinematographer Jeffrey Jur shoots too much of the film like a TV movie. It doesn't have the cinematic scope or visual language I wish it did outside of the musical numbers. As for storytelling, I found myself too often asking, especially in the first half, "What are we supposed to take away from this story?"

Maybe nothing. Maybe we're just supposed to know more about an underrated musical icon. For that reason, “Bessie” is best appreciated as a character/performance piece. Like you would if you went to an actual Blues concert, just enjoy the star in the spotlight, sharing some of herself and some of the visions of her songwriters in every note. 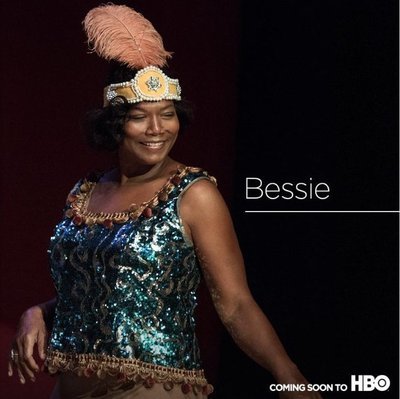