The oddest thing about "Besharam," in a litany of incredibly perplexing elements, is how cheap and small it seems. One of the first scenes in the film sees the sinister gangster villain (Javed Jaffrey) and henchmen being pulled over by the police, in a stolen car with a very large bag of money in the trunk. One of the henchmen produces a rocket launcher, as one does, and blows up a cop car. This is nothing out of the ordinary—what are rocket launchers for if not blowing up cop cars in the first reel?—but the resultant explosion is a dismayingly cheap-looking, seemingly computer-generated fireball.

It would be nice if this were an aberration. It's not always possible to get everything exactly right when making a movie. But it is possible to get at least one or two things right, and "Besharam" can barely meet that threshold.

To be perfectly clear, the problem is not Ranbir Kapoor, who gives a committed lead performance as Babli, a car thief. The character is built up in typical "He's the best there is!" action movie terms before his proper introduction, whereupon he's revealed as a bumbler who very nearly gets caught during the film's first theft, then wrecks the vehicle and has to get a new, non-destroyed one to appease Jaffrey's gangster. Unfortunately, this is a pattern throughout "Besharam," a film that keeps promising things it can't or won't deliver.

The title translates to "shameless," and Babli is called "shameless" by nearly everyone he encounters, including bumbling, corrupt cops Chubul Chautala (Rishi Kapoor) and Bulbul Chautala (Neetu Kapoor), and the presumptive love interest Tara (Pallavi Sharda, with whom the hero has as little romantic chemistry as has ever been seen in a film). Despite the endless repetition of the word, there isn't a whole lot of actual shamelessness on display. Babli steals cars for a living and donates all the proceeds to the orphanage where he grew up and still lives, fairly shamelessly, but the moment he lays eyes on Tara, he suddenly is overcome with a desire to reform. It could be that the movie itself is what's shameless, in its substitution of urination and defecation for actual jokes, and references to other movies and movie stars in the place of an actual movie.

As before, though, the problem is not with Ranbir Kapoor. He expends a great deal of energy trying to convince the audience (and perhaps himself) that "Besharam" isn't a disaster. The business with his parents Rishi and Neetu—who, for non-spoiler clarification, do not play his parents in the movie—is fitfully entertaining for the first minute or two before the movie starts beating the joke into the ground that "THEY'RE HIS PARENTS! HA HA HA!" It's okay. We already know. Calm down. And please, for the love of all that is holy, do not humiliate Rishi and Neetu Kapoor with the gross bathroom gags and other crass, demeaning, unfunny comic business.

Most of the blame has to fall to writer-director Abhinav Kashyap. The story is barely a story. The love interest (who is never anything more than that, despite lame attempts to play her up as a modern businesswoman) falls in love with the hero when it's expedient for the plot, then morphs into a submissive, helpless, sighing cliché. Endangering children to jack up a film's tension is just as much of a cliché, and even more distasteful.

All of this bad storytelling is accompanied by listless, perfunctory filmmaking. "Besharam" has some of the worst editing of any professionally-released movie in years, with everything from pacing to visual legibility suffering terribly. It is very difficult to reconcile this as the work of the man who made 2010's smash hit "Dabangg," which, while far from perfect, still had nifty action sequences and the great item number "Munni Badnaam." The title song is the closest "Besharam" comes to recapturing that glory; but even then, the serviceable if not terribly original "have Ranbir dance around in a faux leather suit with a few dozens models fawning over him" template gives way to terribly shot and badly matted images of Ranbir Kapoor flying around with a lime rind on his head. What can you say about a film that carries every idea it has to the most uninteresting conclusion imaginable? 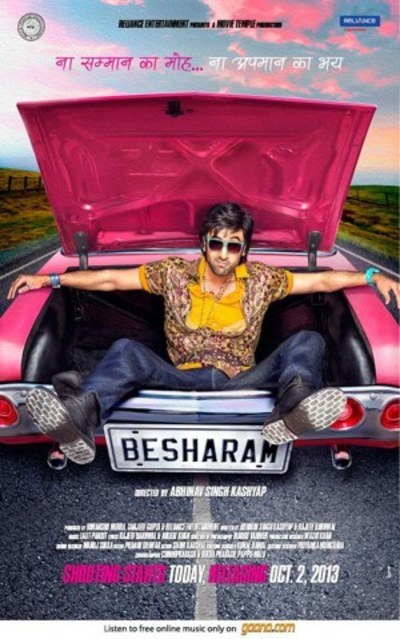