There is a graceful ease to Mia Hansen-Løve’s cinematic prose, one that can feel misleadingly simple at times. But once you allow her placid beats wash over you, the intricacy of her ideas rises to the surface with little effort, revealing the deep thinker and feeler Hansen-Løve always has been. Just think of “Eden” and the serenity in which Hansen-Løve telegraphs her nostalgia about the fading cultural prominence of the French touch generation, or the calm sensuality of her pronouncedly feminist “Things to Come” as she tiptoes around the new chapter in the life of a recently divorced female professor. These films and others in her sophisticated oeuvre will give you enough clues about the filmmaker’s interest in the complexity of creative minds with all their emotional, moral and existential dilemmas as well as the casual comfort through which she transposes her preoccupations onto the screen.

“Bergman Island” is the writer/director’s latest excursion full of surprising rewards. It finds Hansen-Løve in a characteristically reflective place, through the story of two filmmakers—one prominent, one less experienced but perceptibly promising—spending a lavish amount of time on the Fårö Island of the Baltic Sea, where Ingmar Bergman once lived, loved and made movies. Even though the good-humored proprietor giving the guest couple a walkthrough of their vacation home is quick to remind them that they are where Bergman once conceived “Scenes from a Marriage” and caused the divorce of millions of people, the place is certainly a retreat for Tony (Tim Roth) and Chris (Vicky Krieps), the latter being the less famous filmmaker of the two. After all, they are there to work, to soak in all the inspiration they can get and perhaps tour the island on an official “Bergman Safari.” (No, that’s not a joke. It’s a real thing that happens on this island.)

Soon enough, the couple settles into a routine with Bergman’s shadow and filmography following them everywhere. And as they make their own way through the island—Tony takes the safari, Chris prefers the company of a young student and less touristy outings—subtle marital difficulties percolate with a healthy dose of sharp humor. Chris wonders whether the society would ever allow her (or women filmmakers in general) to have nine children from six different romantic partners like Bergman did in his time. Tony, meanwhile, circulates talks and screenings with the slightest hint of haughtiness, mingling amongst fans eager to rub shoulders with him. In a suggestive and fiendishly funny incident, the duo settles in for what they assume would be a light-hearted viewing, only to be shown a print of Bergman’s cutting psychodrama, “Cries and Whispers.”

But before you can ask the question, “which Vicky Krieps character will age faster: the one on the age-accelerating beach in M. Night Shyamalan’s 'Old' or the one stuck in Fårö with her famous director husband,” Chris pitches a new story to Tony, asking for his help in finding an ending. This is where “Bergman Island” connects itself to another land via a hidden passage, one Hansen-Løve bravely walks on, revealing a second film within that just might be immensely personal to the filmmaker (as in, both Hansen-Løve and Krieps’s Chris), or a complete work of fiction. It follows the young American filmmaker Amy (Mia Wasikowska), who arrives on an island (“a place like this, Chris remarks) to attend the wedding of a friend and perhaps rekindle a fleeting romance with her first love Joseph (Anders Danielsen Lie), the old flame that got away. Set over the course of three celebratory days, Chris’ incomplete tale unfolds around minor and major conflicts, like the inappropriately chosen and bridal-looking white dress Amy brought along to attend the wedding—"it’s more cream or off-white,” she insists—and of course, the brief affair she embarks on with Joseph despite the fact that they’re now both involved with other people.

To validate the latter, “I love two people,” Amy matter-of-factly suggests in a refreshing statement that removes self-vilification from the act of infidelity with a startling sense of just and confidence. And it’s with a similar type of confidence that Hansen-Løve interlocks the two tales, equally dear to her heart. Pensively shot by Hansen-Løve’s repeat collaborator Denis Lenoir and hypnotically edited by Marion Monnier—another Hansen-Løve regular—in a luxurious rhythm that blurs the lines between the two intimately interlaced films, “Bergman Island” slowly becomes a heady experience from there. And its resonance only grows with the realization that Hansen-Løve—an actor, filmmaker and a former Cahiers du Cinéma film critic—was once both the creative collaborator and life partner of the prolific Olivier Assayas. In that regard, Hansen-Løve’s private imprint on the material is undeniable as “Bergman Island” toggles between the tales of Chris and Amy, eventually melting their respective realities into the same cauldron, interchanging objects and even pieces of costumes between the two films.

Two beady-eyed performers that strangely look more alike over the course of “Bergman Island,” Krieps and Wasikowska register as collectively haunting in the respective skin of their characters, delivering performances that both contrast and complement each other, like two chameleons in a harmonious duel. Their synchronization becomes so pronounced over time that this critic found herself wondering how the duo would look recreating one of Bibi Andersson and Liv Ullmann’s famous “Persona” stills.

The finish line in “Bergman Island” is of the opaque kind. But anything else would have done Hansen-Løve’s wistful sleepwalk through memory, time and cinema injustice. Her film is less a direct, clear-cut homage to Bergman, and more a searching exploration of reality and art in the way they mirror, propel and feed on one another, washing ashore remembrances both dreamy and lifelike.

This review was filed on September 16th from the premiere at the Toronto International Film Festival and is being re-run for the film's limited theatrical release today, October 15th. 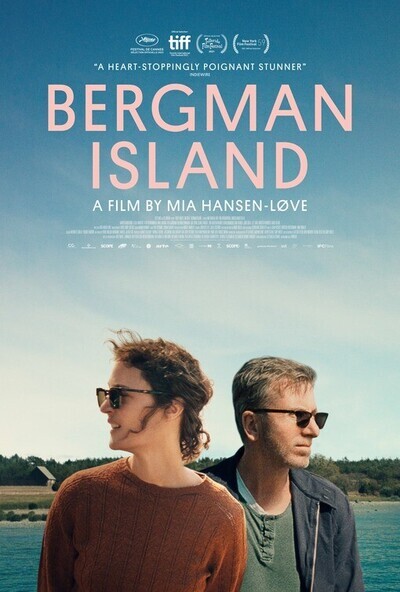 Rated R for some sexual content, nudity and language.