Being At Home With Claude

"Being at Home with Claude" is an exercise in puerile masochistic romanticism, given a certain cachet, I suppose, because it's set in the gay underworld of Montreal. Most of the running time is given over to a policeman's interrogation of a young man who has confessed to a violent murder. There are flashbacks explaining how he met and fell in love with his victim.

The entire movie suffers from being based on the wrong entry point into the material. The story involves Yves (Roy Dupuis), a homosexual hustler who meets a young man named Claude (Jean-Francoise Pichette) and finds his whole life in upheaval. He loves Claude, and Claude loves him, and eventually that love encompasses the whole universe for Yves, who murders Claude in the throes of perfect passion because he cannot endure the thought that such perfection could pass, and that Claude, like everyone else, might grow old and mundane.

The movie tries to make Yves' decision into some kind of deep metaphysical statement, but actually it's just a tortured version of the old advice to live fast, die young, and leave a good-looking corpse. There is something to be said for quitting while you're ahead, I suppose, but personally I would always like to have a look at tomorrow's newspaper, even if that meant falling a bit behind.

The scenes in the movie involving Yves and Claude are the only ones of interest. Yves is painted as a tender-hearted hustler who sometimes cares for his clients more than they care for him, and Claude is a nominally straight young student from the provinces who discovers his homosexuality in Yves' arms. The film should have explored their relationship more deeply.

Instead, it follows the formula of a stage play by Rene-Daniel Debois, who labors under the apprehension that the real interest in this story centers on the police inspector. This man, a tough guy recycled out of countless cop movies, wants to know why Yves murdered Claude (and why he chose the private library of a prominent judge to turn himself in). This leads to overacting of the worse sort, as the cop shouts threats and Yves shouts denunciations. If the cop grabs Yves by the collar and slams him against the wall once, he does it a dozen times - so often, it's not intimidation, it's calisthenics.

The problem is that there is not one atom of believability in the cop (played by Jacques Godin), who obviously is a tool of the playwright's devices. Since we do not care what he finds out, or what he thinks about it, the entire story centers on the wrong question.

If they had written out the cop and the interrogation, and started over again with Yves and Claude, they might have come up with something. I hope it would not have included Yves' endless speech at the end about how and why he murdered Claude. Maybe it worked on the stage. I dunno. On the screen, where we have seen the murder in the opening credits, it is tortured and overwritten.

One of the film's oddities is a stenographer who makes verbal notes into a kind of soundproof cone that fits over his lower face.

Having not seen such a device before, I thought for a time he was a cop with emphysema. His eyes, above the cone, circle wildly left and right as Yves and the cop jockey for position, trying to solve the puzzle of how many possible camera angles there are in the room. 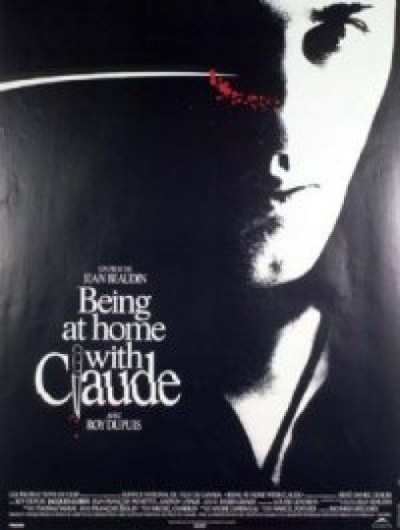