You know that visual trope in horror movies about mirrors? Where if a character looks into it under certain timing, something sinister pops up over their shoulder? “Behind You,” the kind of horror movie that can politely be called defiantly unoriginal, bases its main supernatural ghoul on that cliche, along with many others. The movie is a self-proclaimed bingo board of horror mainstays (creepy kids, music boxes, slamming doors), but one that ensures that the filmmakers and viewers alike will lose.

Written and directed by Andrew Mecham and Matthew Whedon, “Behind You” concerns two sullen young sisters who are put under the care of their estranged Aunt Beth (Jan Broberg) after their mother died. The younger sister, Claire (Elizabeth Birkner), doesn't like talking to strangers after the loss, and clings to her stuffed animal while older sister Olivia (Addy Miller) tries to assist with communication. The two have a great deal of suspicion about their aunt, who voices early on that she doesn't want them there, and the neighbor Charles (Philip Brodie), who plainly looks like he's up to no good. Aunt Beth tells them they absolutely must not go into the basement, or take the elevator, and so it's only convenient when this bossy host is also revealed to be a murderer. But there is much more to that story, and to the house, especially as young Claire gets lured down to said basement, where an evil spirit wants to get out of a mirror.

As enticing as that set-up sounds, it is nearly impossible to get into "Behind You," or become emotionally invested in the characters. Even the sisters' shared grief feels like a shorthand, another piece dumped in exposition. With the film's performances ranging from undercooked to overcooked, even before it gets to scenes of screaming characters running away from randomly slamming doors, “Behind You” is uncertain about what worthwhile ends all of its hand-holding dialogue will lead the viewer will lead to. When the aunt gives them "the rules" about the house, it's too obvious a checklist from the screenwriters of what elements will inevitably play a larger part. Even with such obvious storytelling devices, "Behind You" has little tact.

span class="Apple-converted-space"> That the adults in this movie are willfully dumb should nearly be expected, but “Behind You” seems to rub it in our face. It’s not just dialogue like, “They’re not your visitors—they’re your nieces!”, it’s all the contrivances that happen so the story can keep doing whatever it wants to do. At one point, a gun AND a knife are revealed to be hidden under a cloth in a car’s backseat. You’d lock that car if that were your business, right? Not so in "Behind You." The script's interest in the past becomes a dead weight, which leads to boring emotional monologues from the adults and later a typical referencing of every supernatural movie's guidebook about how to deal with the demon in one's house.

To be fair to its efforts, "Behind You" does wind up one surprising jump scare from out of darkness. And while its individual creepy scenes are far more long than they are effectively dreadful, at the least the story has an overall condensed time frame, where the idea of good and bad shifts in ways that aren't entirely predictable. “Behind You” also tries to spice things up sometimes with some cinematography of commendable hamminess—that basement goes full-on, Dario-Argento-red whenever something bad is going to happen—and filming around a bunch of mirrors is a tricky feat that the movie cleanly navigates.

But there’s just so little sense that "Behind You" is interested in making its familiar elements more interesting, or in harnessing whatever inspiration clearly inspired this production at least early on. It's baffling when an independent project like this prefers to be so rote—why not make things a little weird? Throughout its 86 minutes, it's too easy to tell whenever "Behind You" has given up at being truly surprising. 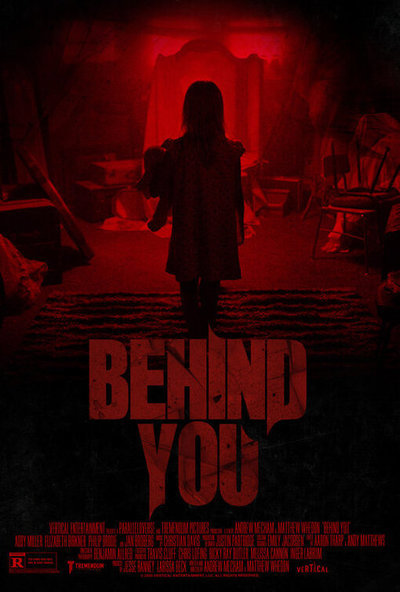 Rated R for some violence and bloody images.