The tone and style of the Indian anti-terrorist action flick “Beast” varies wildly throughout, sometimes even within the same scene. This takes some getting used to, especially in a “Die Hard”-style siege thriller that’s also sometimes a musical-comedy about a handsome bachelor spy who also loves children and excels at dismembering and/or murdering terrorists.

There’s nothing unusual about this Masala-style of Bollywood pop filmmaking, where filmmakers pander to the back row with a schizoid combination of Vaudevillian quips and pop culture references, overdetermined romantic interludes, and nationalistic saber-rattling. This sort of anti-terrorist movie also sits comfortably next to a couple of other COVID-delayed Indian productions, especially from Bollywood (Hindi language) like the blockbuster “Sooryavanshi” and the superhero thriller “Attack—Part 1.”

“Beast,” a Kollywood (Tamil) star vehicle for Vijay, still feels different, if only for how vigorously its creators try to sell their lead as a 21st century renaissance man. Vijay (“Master”) can dance a little, drive a car through various glass surfaces, and also behead a terrorist and then chuck that guy’s disembodied head out of a tall window. To say nothing of the scene where Vijay puts on a set of roller blades and literally skates circles around a group of mask-wearing extremists.

Vijay’s all-things-for-everyone self-image is celebrated throughout, as in the chorus of one anthemic song that hails the chipmunk-cheeked hero as “leaner, meaner, stronger.” A concluding number also describes Vijay as a “multifaced tiger with a multifaceted avatar.” At this point in the movie, Vijay’s flying himself back from Pakistan in a borrowed military jet plane, having just independently massacred a terrorist encampment.

In “Beast,” Vijay plays Veera, a superhumanly resourceful former member of India’s Research and Analysis Wing (RAW) intelligence agency. Veera retired from RAW eleven years before the movie’s present day: in an introductory flashback, Veera unintentionally blows up a little girl with a rocket launcher. Look, there’s no way to make this plot sound less crazed than it is, so let’s have a paragraph break.

Ok, so Veera’s now extra-sensitive about kids, which explains why he only springs back into action after he, now working for a failing security company, hears the cries of distressed children after the ISIS-style ISS terrorists take over Chennai’s East Coast Mall. These terrorists are ruthless, as we can tell by the way that one of them back-hands a lady and traumatizes a crying girl. (among other things) ISS’s terrorists are led by Saif (Ankur Ajit Vikal), who spends most of the movie wearing a Latex mask that weirdly resembles Anton LaVey, and his traitorous accomplice, the Indian government’s unnamed Home Minister (Shaji Chen), as we see in an early scene.

The cartoonishly ruthless nature of Saif’s guys is a given. Or maybe it’s just not emphasized as often as Veera’s equally brutal counter-measures. There’s also nothing apologetic or conflicted about the violence in the movie, which is effectively played for kicks in a handful of action-intensive set pieces. In an early scene, Veera also slices off one masked villain’s arm by the elbow joint. And he stabs two ISS terrorists to death in front of a captive audience of mall hostages. Between murders, Veera plays dead in order to fake out his second victim. “This is all normal,” he tells the hostages after he knifes the second guy in the head. The crowd seems to believe Veera since, in a later scene, a very nervous civilian (prolific Tamil comedian Yogi Babu, of course) is beaten up by ISS’ terrorists, but refuses to snitch on Veera.

Vijay is not as inspiring in “Beast” as he was as recently as last year’s “Master,” though neither movie is disappointing. “Beast” only feels relatively minor because it’s overstuffed with tangential showcases for comic side characters, like peevish negotiator Althaf (Hollywood director Selvaraghavan) or bumbling security company boss Dominic (VTV Ganesh). Some of these characters are barely in the movie, like Veera’s love interest Preethi (Pooja Hegde) and her persistent fiancé Ram (Sathish Krishnan).

In time, the movie’s routine narrative digressions also seem normal enough since, according to Yogi Babu’s sub-pot, it takes a village to support Chennai’s own John McClane. Luckily, Vijay makes up for lost time during the movie’s energetic action scenes, most of which are as polished and well-designed as they need to be. Vijay’s dancing hasn’t improved much, but he looks more comfortable making photo booth-worthy faces (mostly pouts and snarls) while firing a big gun in slow-motion.

The key to enjoying “Beast” is accepting its inelegant, inconsistent, and often insane terms and conditions. There’s so much of everything—and in such haphazard portions!—that the main thing holding this thing together often seems to be the movie’s centralized location and Vijay’s abundant and well-advertised swagger. He’s almost as good as he needs to be here, and it’s hard to stay mad at a movie where bloody violence and/or corny jokes frequently break out in a mall that advertises for Basics, Pantaloons, and the Fruit Shop on Greams Road. Watching the movie’s ensemble cast members valiantly struggle to make this ungainly action-comedy seem even sort of normal is usually more engaging than the movie’s big action scenes, too. By the time Vijay breaks out his in-line skates, everything that doesn’t quite work about “Beast” only enhances the movie’s genuinely endearing too-much-ness. 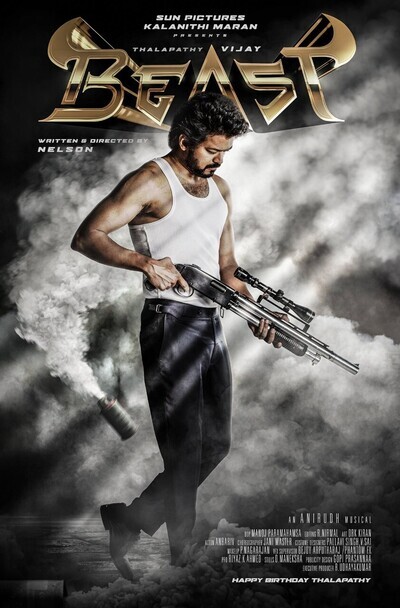