On November 15, 2013, the city of San Francisco became Gotham City in the eyes of five-year-old Miles Scott. Along with the help of a taller Batman (Eric Johnston, aka E.J.), leukemia-fighter Miles adorned a heavily-labored Dark Knight costume, answered calls for help from the police commissioner (SF police chief Greg Suhr), thwarted the crimes of Riddler and the Penguin, and rode in a Lambroghini-turned-Batmobile. He even had lunch at the Burger Bar.

In the eyes of everyone else, those in the production or witnessing it, this Make-A-Wish-procedure-come-true was larger than ordinary life. When 200 extras were originally sought to create a crowd, thousands showed up, turning a little play-acting into a rally of strangers finding comfort in the image of someone doing good. The vibes went viral, and the collective of this entire world might have felt just a tiny bit friendlier, if only for those moments when #SFBatkid kept popping up on social media.

This former feel-good headline now has the feature documentary presentation with Dana Nachman’s “Batkid Begins,” a clever hybrid of formerly collected footage from the event (by John Crane Films, whose 10-minute “official” Make-A-Wish movie is on Youtube) with new interviews, reenactments, and zippy comic book graphics. Nachman’s film is a crowd-pleaser with succinct cases of kindness, but one that doesn’t venture to do more than reminding of when a great good dominated one moment.

“Batkid Begins” is sharply-made documentary entertainment, as co-writers Nachman and Kurt Kuenne turn this story into an optimistic recap of how the heck this all came together. It aptly turns the events into a Hollywood story, albeit one with more tact than a lot of other stories with an ailing child at the center. In one of its wisest choices, the documentary knows that Miles is more the mascot of the project’s efforts than its star, so the film doesn’t submerge itself in tears about his past medical conditions, or even the nightmares that it put upon his picturesque, small-town Californian family. The film focuses instead on its heralds of hope, like E.J., or peppy graphics guy/hilarious Penguin imitator Mike Jutan, or Make-A-Wish coordinator Patricia Wilson, the head dreamer of this operation. “Batkid Begins" brims with subjects who come in with their own enthusiasm, color, and comedy. And as a nice bonus, these real-life characters are also part of the movie’s exciting reversal of the adult-shaming that many films can fall into, especially when believing so hardly that children are the future; that only the kids can fix the depraved hell we hath wrought, again. “Batkid Begins” is more about adults doing good, and having fun, than it is just a Make-A-Wish kid’s city-wide playtime.

Nachman’s documentary does a great job of showing the many pieces that came into place for Miles’ moment, but it doesn’t look much at what’s underneath it all. The elements that would fully round this story as human are undercut by its otherwise appropriate light-hearted perspective. With its warming attitude, “Batkid Begins” is nonetheless a small picture overview of an albeit big event, explaining kind gestures with its allegiance for goodness, despite the complicated motivations of people; there’s more to be explored here about the faces in the crowds. As the product placement that constantly enables these charitable moments proves (not to mention the ideological gold mine this film is for Warner Bros. and Make-A-Wish), goodwill can’t just be a definitive, enveloping explanation for what this phenomenon touched in people, or motivated them to show up, or create signs, or offer certain services for free. All bunched together, even under the same cause of #SFBatkid, we’re naturally more complicated than that. Losing its reality to fantasy, “Batkid Begins” has the effect of a vitamin pill more than a feature film’s full meal; it’s concentrated with the good stuff that makes life better, but offers nothing to chew on. 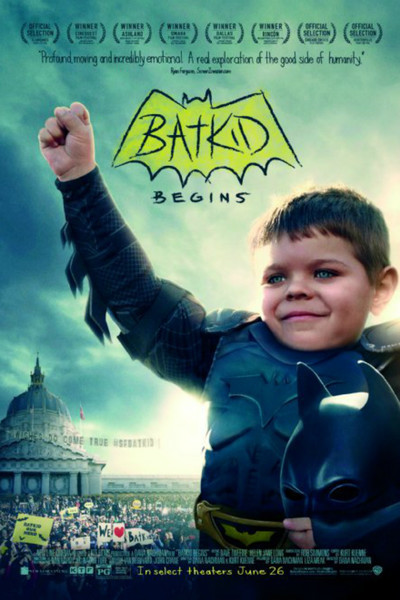