An unexpected guest comes to call. There's something "off" about the guest. People—socialized to be polite—ignore the red flags, ignore the spidey-sense of something not being right. They think uneasily, "Maybe we're just being paranoid." And so they invite the guest to come inside. If "The Babadook" taught us nothing else, it's that once you let that thing in, you'll never get rid of it. "Barracuda," co-directed by Julia Halperin and Jason Cortlund ("Now, Forager") is a sometimes-riveting "take" on the uninvited guest plot-line, grounded to the earth by the phenomenal performances of Allison Tolman and Sophie Reid, playing half-sisters getting to know one another for the first time. "Barracuda" is as much about the ebb and flow of tension, suspicion and uneasiness surging in the space between these two women as it is "about" anything else. Even though other characters appear from time to time, "Barracuda" is a two-hander, with one extraordinary scene after another (the script was written by Cortlund). There are times when it's difficult to even locate the source of the uneasiness, the sense of increasing emotional danger. This forces the audience into complicity, where we, too, ignore our spidey-sense, our instincts. Maybe we're being paranoid, narrow-minded. Shouldn't you be kind to guests, especially one who's so hard up, especially one who's a long-lost family member? "Barracuda" says "Not so fast ... "

The opening sequence of the film shows Sinaloa (Reid) swimming in a river, fully clothed, with a huge factory looming in the distance. Next, we see her hitching rides across America, destination unknown. With her poker-straight hair down to her hips, battered jeans, flowy tops, she looks like she could have emerged from the late 1960s, a lost flower child in search of her tribe. She eats food out of dumpsters, splashes water under her arms in truck stop bathrooms. We learn about Sinaloa only from watching what she does (this remains true throughout). On her arrival in Austin, she shows up at the house of her half-sister Merle (Tolman). Up until that moment, Merle was unaware of Sinaloa's existence. Their father, now dead, was a well-known country singer who impregnated Sinaloa's mother during a tour of England. According to Sinaloa, he kept in regular contact, and even visited on occasion until all contact suddenly ceased. Sinaloa's arrival throws Merle—and Merle's fiance Raul (Luis Bordonada)—into barely suppressed chaos. Merle does not embrace her long-lost sister with open arms. She's put off by Sinaloa's matter-of-fact attitude. What does Sinaloa want? Money? Acknowledgement that she's part of the family? Against her better judgment, and at Raul's gentle insistence, Merle invites Sinaloa to stay with them until she can find a place to live.

Merle lives a complacent life, busily planning her wedding (all under the watchful eye of her mother, a wonderful JoBeth Williams). Sinaloa does not exhibit the ingratiating behavior one would expect from a newcomer in an established family group. A singer-songwriter herself, she joins a sing-along around the campfire at a family gathering, dominating with her powerful and clear voice, and with her ability to keep up with the guitar-playing geezers, who all seem delighted by her. Merle looks on, jealousy and discomfort struggling for possession of her face. Although she never says it, it's clear from Sinaloa's aggressive behavior, the sly almost triumphant looks constantly thrown Merle's way, that Sinaloa is more their father's daughter than Merle ever was. Or is Merle just being paranoid and petty?

It's a bold choice to place someone as unlikable as Sinaloa at the center of a film. She's fascinatingly unlikable. We probably all have known someone like Sinaloa, the kind of woman who dominates a room even when she's silent. A fearless extrovert, she takes what she wants. She shovels the food Merle prepares into her mouth. When Raul tries to clear her plate, she grabs onto it, snapping "I'm not done." A little smile flickers on her lips when things get awkward. Her competitiveness is clouded by plausible deniability. She disturbs the atmosphere just by walking into the room. Her walk is distinctive, a barreling pushing-forward stride. If you saw her coming at you, you might wince in preparation. Any impulse towards softening the character, or explaining her, has been avoided. In many ways Sinaloa reminded me of Sandrine Bonnaire's unforgettable character in Agnès Varda's "Vagabond." Varda gave the brilliant Bonnaire only a couple pieces of direction, the most important one being: "Never ever say Thank you." Sinaloa never says "thank you" for anything. It doesn't even seem to occur to her. Sophie Reid's performance as Sinaloa is a refreshing corrective in a world where "relatable" and "likable" has come to equal "good." Tolman is equally impressive as a woman leading an orderly and satisfying life, whose psyche starts to deteriorate with every passing moment in Sinaloa's destabilizing presence.

Halperin and Cortlund (and cinematographer Jonathan Nastasi) make some distinct visual choices in their approach to Sinaloa early on. Often, they film her as a blur, moving through the background or—even creepier—in the foreground. The world around her is in focus, yet she is indistinct, an abstract smudge. Sinaloa is seen doing very strange things as a blur in the background, while the people in the foreground go about their lives, unaware. It's tremendously disturbing.

Some of the turns taken in "Barracuda" disappoint, as the film moves into more predictable genre territory. A couple of the major set-pieces later on are presented as terrifying climaxes in a thriller. But nothing in those scenes is scarier than the moment when Sinaloa stands on a lawn staring through a picture window at Merle and Merle's mother talking about wedding dresses. The two women in the foreground are in focus, and Sinaloa is a blur, but her energy is so wild and full of rage that it could probably shatter that window. If Merle and her mother turned around, they would scream, even though Sinaloa isn't doing anything violent. She's just standing there. Who is she? What does she want? When someone shows up on your doorstep, a family member who has no home, you are expected to take them in. "Barracuda" turns that on its ear. 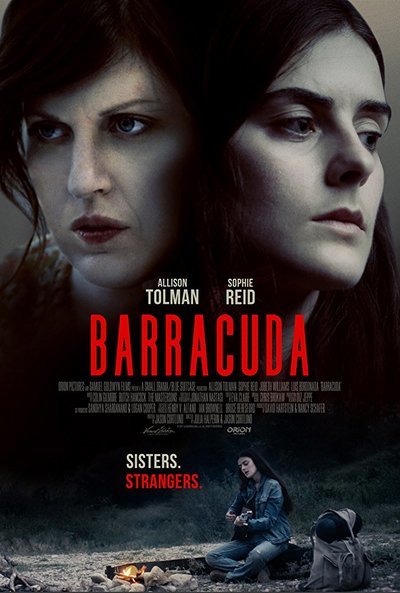