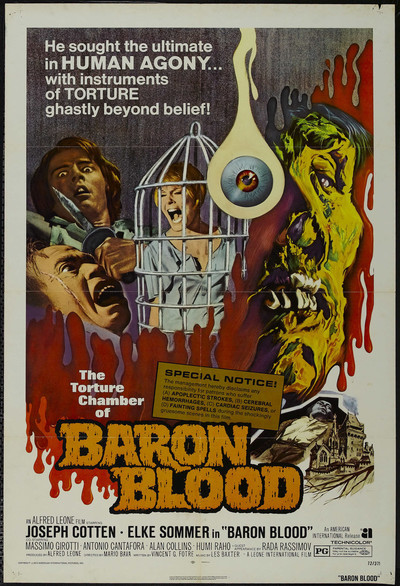 "Baron Blood" is the nickname of the evil Count Whatsizname (Joseph Cotten), who is brought back from the dead by an incantation recited by his moronic American cousin (who is in Austria on a vacation, and how much does he expect for five dollars a day, anyway?).

Once restored, the count re-establishes himself in the sadism line. He has a cellar-full of torture devices the likes of which have not been seen since the last time American-International made a movie in a cellar, and, sure enough, Elke Sommer gets herself shackled to the Rack in nothing flat.

Sometimes you can enjoy horror movies because they're so bad, but "Baron Blood" isn't bad enough. And Joseph Cotton makes an unconvincing evil count, mainly because he seems so nice most of the time. Why can't decent old Joseph Cotton ever be in a movie where he's shackled to the Rack by one of the all-American beach-boy types, instead of the other way around? That way at least we'd care if he got loose or not.

The Thing with Two Heads