I have no doubt that Balto was a real sled dog, although I have certain doubts about whether he was able to achieve all of the feats depicted in "Balto," especially tying the dead driver to the sled before hauling him back to Nome. A dog can't tie a knot worth a darn.

I guess you cut a little slack for a movie like this, which is set in the cruel Alaskan winter of 1925, when a diphtheria epidemic broke out in Nome, and the local doctor ran out of antitoxins, and when neither planes nor trains could get through, dog teams were used to bring back the medicine and save lives.

That much we know is true because of the animated movie's live-action prologue and epilogue, showing a monument that was erected in New York's Central Park in honor of the "indomitable spirit" of the hero dogs. Why this expensive sculpture was located in a New York park rather than a Nome park probably could inspire another movie, perhaps one directed by Oliver Stone.

But I stray. Most of the movie is animation, telling the story of Balto (voice by Kevin Bacon), who is half-wolf and half-dog, and an outcast in Nome, because you can't quite trust a wolf. Balto is in love with a beautiful female dog named Jenna (Bridget Fonda), who belongs to a cute little girl named Rosy (Juliette Brewer). Balto is brave, loyal and honest, but gets into trouble because of the evil dog Steele (Jim Cummings), who frames him for stealing sausages.

When Rosy falls ill, Balto wins the race to determine the fastest dog in town, but once again Steele plays a dirty trick and gets the job of leading the emergency mission. That sets up the movie's most exciting passages, after the mission gets lost and Balto sets off to the rescue.

Of course, Balto does not go alone. It is an inviolable rule of all animated family movies that the hero have two, or preferably three, buddies who tag along for comic relief. Balto's best friend is a Russian goose named Boris (voice by Bob Hoskins with an accent you could bottle) and a couple of polar bears (both voices by Phil Collins, because polar bears all sound alike). Off they go into the wilderness, surviving avalanches, bitter cold, marauding bears, falling through the ice, falling over cliffs, and almost being speared by stalagmites.

"Balto," which was produced by Steven Spielberg's animation unit at Universal, doesn't have the magic of the recent Disney animated films, and not even near the same appeal to adults. But on its own turf it works well enough: This is a kids' movie, simply told, with lots of excitement and characters you can care about.

My only question involves Balto's personality. As a half-wolf, he is an outcast in Nome, feared by humans and scorned by pedigreed dogs like Steele (although Jenna and some of the other nice dogs believe in him). Balto has grown accustomed to slinking away with his tail between his legs, and nursing his inferiority complex.

But then there's a big showdown out on the tundra, and I expected Balto at last to come into his own, stand up for himself, and take on Steele. No such luck. Balto remains the master of the strategic retreat.

I guess this shows you don't have to fight to get what you want, and I guess that's a valuable lesson, and maybe that's even the message the filmmakers had in mind. But, hey, Balto man - if ever there was a dog that deserved to have an angry wolf make dog meat out of him, it's Steele. Balto! Attack! 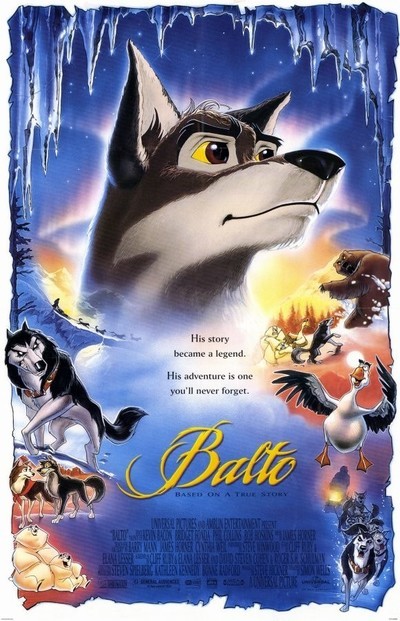