Chris Smith is a technician when it comes to unraveling true stories that are far stranger than fiction. It started over two decades ago with the wonderful “American Movie” and has developed over the years through projects like “Fyre” (about the insanity of the Fyre festival) and his producing of the pandemic smash hit “Tiger King.” His eight-episode docuseries “The Disappearance of Madeleine McCann” also stands as one of the best true crime projects on Netflix, an example of how good Smith can be at charting these kinds of larger-than-life stories. And so he’s a perfect fit for the ludicrous soap opera that is the tale of Sarma Melngailis, the owner of a famous New York eatery who was accused of stealing millions from her employees. Much more than a typical tale of a corrupt businesswoman (which has been a subgenre of its own lately), the four-part “Bad Vegan: Fame. Fraud. Fugitives.” reveals how much can go wrong in a successful company when it’s poisoned from within in ways that no one could ever predict. Smith maintains an interesting distance from Melngailis, largely allowing viewers to decide the level of sympathy they have for her. Is she a victim of a con man? Undeniably. But how much responsibility should she have for letting the wolf into the hen house? That will be up to you.

Melngailis built a reputation in the New York culinary scene in the early 2000s after graduating from the French Culinary Institute in 1999. After a failed venture, she partnered with Jeffrey Chodorow on a raw food establishment called Pure Food and Wine, which would become a massive success. Howard Stern, Alec Baldwin, and Bill Clinton would sing its praises publicly, and it would be named twice to New York magazine’s list of the top restaurants in the city, and five times to the same list for Forbes. The business expanded to include One Lucky Duck and Takeaway, and Sarma seemed like one of the biggest rising stars in the culinary universe. Behind the scenes, absolutely crazy things were happening.

Sarma Melngailis started dating a man named Anthony Strangis, who also called himself Shane Fox, among other things. Strangis was a high-level con man, a gambling addict who somehow convinced Melngailis to consistently siphon profits from her company into his account to spend at Foxwoods Casino. He won her over with some stunning mind games that included talk of high-level, Illuminati-like organizations who were watching them, constant tests of her loyalty, and the belief that he could make her dog immortal. No, seriously. Almost any of the things that Strangis convinced Melngailis to believe seem ridiculous when taken individually, but “Bad Vegan” does an excellent job of chronicling how these abusive brainwashing dynamics develop over time. It starts with simple proclamations of love and then the abuser convinces his victim that they need to prove that love. Again and again, and in increasingly crazy ways. Melngailis is incredibly vulnerable and open, revealing how she fell for all of this to such a degree that she ended up a fugitive, caught with Strangis in Tennessee when the fancy vegans ordered a Domino’s Pizza.

Smith carefully chooses his interview subjects in a way that’s sympathetic to Melngailis. We only hear from Strangis through recordings of phone conversations and emails he sent. Employees of Pure Food and Wine express frustration, but the project is framed in a way that feels very cautious about pointing a finger at Sarma, at least until the final chapter, when the question of her responsibility comes to the center. Smith has to walk a very fine line in telling this story. He clearly doesn’t want to glorify Strangis as some brilliant con man, even though he got away with so much for so long, and yet he has to make it clear why his main interview subject fell into all of this man's traps. To maintain that balance, he smartly avoids sensational techniques, letting the people involved tell their stories in a way that's more tragic than tabloid.

What should we take from “Bad Vegan”? Is it just another tale of an awful man ruining an entire organization? Why didn’t Sarma stop him? Why did she believe him? There’s a version of this story that digs a little deeper into how fame, excess, and pressure influenced some of her decisions, but that might require a bit more distance and possibly even some therapy than Smith was understandably not interested in doing. By the end, “Bad Vegan” is almost numbing in its insanity, mostly making the point that once someone like Sarma Melngailis starts down a certain road, any hope of turning back is impossible. Even when you’re promised an immortal dog. 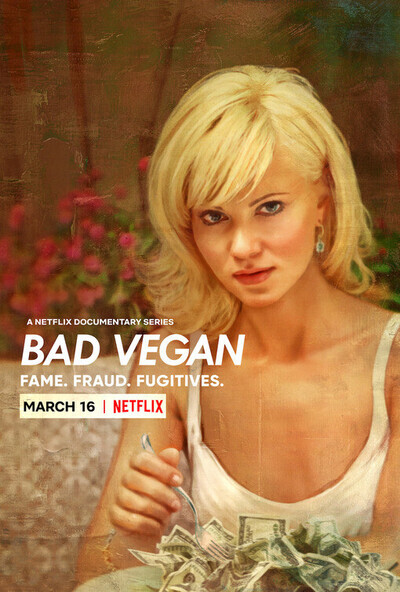