One of the most difficult and challenging puzzles in filmmaking is to tell a story in flashback, and it is a test that Nicolas Roeg fails in his new film, "Bad Timing."

That's a little surprising, since Roeg has proven himself a master of labyrinthine story lines in such movies as "Don't Look Now" and "Performance." Those films, though, had a reason for being told out of chronological sequence—particularly "Don't Look Now," which was about precognition and so, of course, contained events that "happened" before they happened.

With "Bad Timing," though, it's hard to say why Roeg decided to begin at the end and jump around in chronology. The movie contains no revelations that look different the second time around, and so the editing seems merely fancy footwork, or Roeg showing us that he had done this before and can do it again.

One other possible motive for the extremely complex editing in "Bad Timing" may be Roeg's desire to camouflage the fact that his story would be thin and his characters shallow if they were just seen straight through from beginning to end.

The movie is about a relationship between two Americans who meet in Vienna. Why Vienna? Why not Vienna? Art Garfunkel plays a psychoanalyst and Theresa Russell plays a sexually uninhibited young woman who is an alcoholic and pill addict. Garfunkel, however, does not see her as a sick person, but as an exciting conquest. Although the audience can see that she's clearly in desperate physical and mental trouble, Garfunkel's analyst takes advantage of her confusion to move in and establish a sexual relationship.

It's not, mind you, that she objects to sleeping with him. Indeed, she makes the first overture at a party. It's just that the kind of man who would sleep with a woman in that condition (especially if his professional training equipped him to understand her condition) would qualify as an insect. Perhaps the blame is not entirely the analyst's: Nothing in this movie indicates that Roeg has any particular understanding of the fact that his heroine is desperately ill.

And that may be where the film's troubles begin. I suspect that this particular story cannot be told straight through, from beginning to end, without dealing honestly with the nature of the relationship. Since Roeg is unwilling, unable or unequipped to do that, he hides the relationship in a thicket of stylistic fireworks.

His favorite editing device is to flashback repeatedly to a tracheotomy that Russell undergoes after nearly killing herself with an overdose. The doctors cut open her throat and pound on her chest and she screams and bleeds, and this makes great footage for Roeg to cut to whenever his film requires an emotional jolt and he can't supply one.

There is also a "mystery" in the film, and a police inspector (Harvey Keitel) to shadow Garfunkel and try to solve it. The film's most annoying blunder is the way it gradually unveils the solution of the mystery to us. We see one version of Russell's overdose episode, and then another and another, each one showing us a little more, until we find at the end that Garfunkel (gasp!) made love to her when he should have been calling an ambulance for her, instead.

The movie makes this out as near-necrophilia. I make it out as the sort of thing that can happen to you if your keep on taking your chances in singles bars.

"Bad Timing" is finally just an exercise in telling a shallow and crude story in a sophisticated and complicated way. Who needs it? This film has been praised for its honesty, but it would have taken far more honesty (not to mention courage) to deal with the personality disorders of these characters instead of simply burying them in blood, sex, and noise. If there is any reason to see this film, however, it is the performance by Theresa Russell (who was Dustin Hoffman's lover in "Straight Time"). She is only 22 or 23, and yet her performance is astonishingly powerful. She will be in better films, I hope, and is the only participant who need not be ashamed of this one. 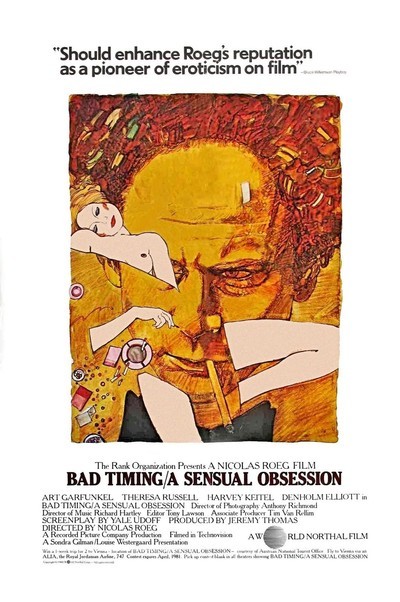