"I have a monster up my ass: this is the farthest thing from a metaphor!"

That line is a pretty neat summary of what "Bad Milo!" is about: a man with a monster up his hindquarters. Whether that loopy premise excites or repulses you, I can assure you that this scat-fueled horror-comedy is funny, and not just in fits and starts. It straddles a spectrum of bad taste that ranges from "Basket Case" to "Family Guy" and gives a bunch of great character actors—including Peter Stormare, Stephen Root, and Patrick Warburton—room to work. And its creators usually know when to let their inherently insane ideas speak for themselves.

"Childrens Hospital" star Ken Marino plays Ken, a stressed-out accountant with a lousy job, a needy girlfriend, and a carnivore dwelling in an indelicate place. Ken's boss (Warburton) gives him the thankless job of telling his colleagues that they've been fired. And Ken's girlfriend Sarah (Gillian Jacobs) wants him to give her children. Finally, Ken's stomach wants him to die: his bowels typically only move at 90-minute-per-deposit rate, and he suffers from volcanic diarrhea.

Thankfully, Ken's psychiatrist (Stormare) helps him get to the bottom of things: the source of all his pain is a rectum-dwelling entity. This creature—Ken names him Milo—looks like a cross between E.T., the baby from "Dinosaurs," and the monster in "Satan's Little Helper." Milo, as we learn, is the personification of Ken's subconscious. It wants to kill anyone who has ever hurt Ken. But because Milo is a part of Ken, Ken can't kill Milo without hurting himself. At his doctor's recommendation, Ken bonds with Milo and hopes that the killing will stop.

On paper, "Bad Milo!" sounds loosey-goosey-crazy-go-nuts. But in practice, it's understated, if only in relation to its bonkers premise. A surprising number of icky jokes play with midnight-movie assurance, like when Ken's doctor warns him that he should just bend over and accept his fate. "Big fat babies come out of tiny vaginas," Stormare hisses, in a line-reading worthy of whatever award's voters will have him.

The film's characterizations are surprisingly not terrible. Sarah is not a shrew, and Ken's deadbeat dad (Root) is pathetic enough to be relatable. This is thanks in no small part to the film's winning cast, but Jacob Vaughan and Benjamin Hayes's script is also responsible. "I mean, nobody's stabbing you in the eye," a character says hopefully. "Not that I can see, anyhow."

"Bad Milo!" rarely goes so far over the top that it loses you completely. It is, to put it mildly, not subtle. But if you watch it expecting to see a dumb idea executed with appreciable skill, you'll have a blast. 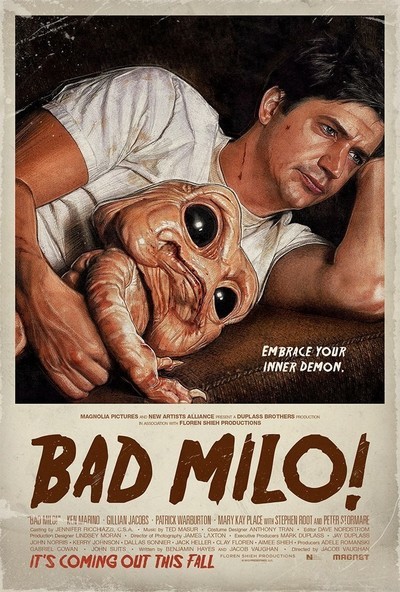