We are only at the very beginning of the wave of documentaries that will be released about life in the United States in the early 2020s. It will be defined by the human cost of the pandemic, but that historical event also shook loose several other issues, including economic disparity and racial inequality, among others. The most essential film yet made about this era is David Siev’s moving and triumphant “Bad Axe,” a film that has already won awards on the fest circuit and is now getting its limited theatrical release. I have thought about this movie more than any other this year. It’s not an understatement to say that it inspired me through some tough times in 2022 because it’s a portrait of family resilience against adversity. So many of the aforementioned non-fiction films to come about in 2020 and 2021 will suffer by trying to tell every story at once—“Bad Axe” tells only one story and yet somehow tells so many more.

Bad Axe is such a small town in Michigan that, despite growing up in the same state, I had never heard of it. It’s one of those communities that most people drive through on the way to somewhere else, but those are the places that often produce the most unity among their residents. Everyone knows each other in a small town like Bad Axe, and everyone knew the family restaurant Rachel’s and its owners, including director Siev’s father Chun. A refugee from the Cambodian Killing Fields at a very young age, Chun built a family and a life in Michigan—his story could have been powerfully told by David even without the events of the last few years because it’s one of trauma and resilience, and how these two things co-exist in so many immigrants to the United States.

Of course, the Siev story changed forever with COVID-19, which sent David home to Bad Axe from his life in New York City. He chose to document the people around him as they struggle with lost business, health insecurity, and even a sense that their community had turned its back on them. “Bad Axe” really gets at how much the national anxiety of the 2020s broadened the chasms that already existed in our society, pushing politically different people against one another in ways that historians will debate for eternity. So much has been written about the divides that emerged in major cities but there’s something so tactile about how the pandemic revealed the structural weaknesses in small towns like Bad Axe, where families weren’t sure that the businesses that put food on their tables would stay afloat, and people saw their neighbors on different sides of protests. Siev captures heated arguments over whether or not it’s even safe for Chun to go to work given his age and the raging pandemic in 2020 and the fear of the disease not merely in health terms but business ones is palpable.

Lighter fluid gets sprayed on an already simmering fire in Bad Axe when the civil rights protests of 2020 come to Michigan. Daughter Jaclyn, who movingly puts much of her life on hold to be there for her family, posts support of BLM on the restaurant’s social page and goes to a rally in a county that probably went heavy to Trump. It all amplifies the tension in the Siev household, and “Bad Axe” becomes even richer as it asks how much we’re willing to sacrifice for the causes in which we believe. How many people are silent because they’re afraid of what happens to their business or family if they speak out?

One might dismiss “Bad Axe” as a collection of home movies as it’s inarguable that the director had access no one else could have possibly obtained. That’s a hollow criticism that ignores how deftly Siev assembles what must have been hundreds of hours of footage that was shot over many months in 2020. He crafts what happened to his family into art, moving organically from major events to minor ones, assembling his story into one that feels relatable to everyone, on both sides of the political divide. “Bad Axe” could have been such an angry film, it could have shouted back at a community that arguably turned its back on the director’s family. And yet it’s such a loving, graceful, gentle film, a movie that knows the best way to get you to care about people like the Sievs is to get to know them. In that sense, it’s an argument for empathy, a plea for people to set aside their differences and merely listen to each other’s stories. It's the only way to bring us back together. 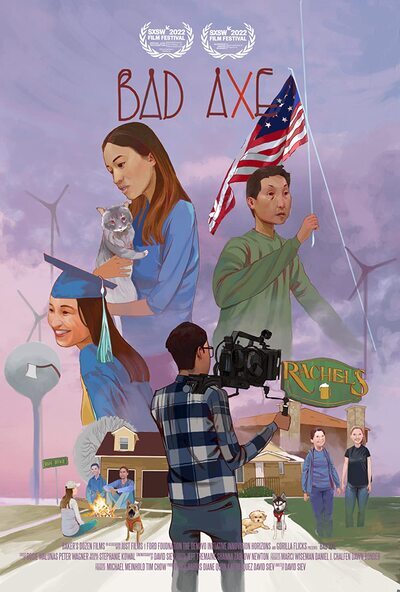 Michael Meinhold as Self

Chun Siev as Self

Skyler Janssen as Self

Jaclyn Siev as Self

Raquel Siev as Self

Rachel Siev as Self