Baby Peggy: The Elephant in the Room

When we think of child stars now, we imagine children aged 9 or 10 or even in their early teens. We think of Macaulay Culkin in "Home Alone," Haley Joel Osment in "The Sixth Sense" or even Jayden Smith starring opposite his father, Will, in "After Earth." But in the silent era, and the early years of talking pictures, child stars were often barely more than babies, as reflected by their names.

There was Baby Marie, who made her most famous film, "Little Mary Sunshine," at age five. There was Baby LeRoy, who was given a studio contract at 16 months and appeared opposite W.C. Fields in the classic comedy "It's A Gift." And there was Baby Peggy, who in 1920 was discovered aged 19 months and in 1924 earned a million dollars for starring in "Captain January."

In the first half of the 1920s, "Baby" Peggy-Jean Montgomery was a superstar, making more than 150 shorts beside her feature films. After that, she became one of the biggest names in vaudeville. And then she disappeared for decades. Her films were largely lost and her name was largely forgotten.

Baby Peggy is still alive. She is in her mid-nineties and is now named Diana Serra Cary. She is a writer and historian and, fittingly, the author of a study of child actors called "Hollywood's Children" and a biography of Jackie Coogan, one of the greatest of all child stars and the one responsible for Coogan's Law, which aimed to protect their earnings from grasping parents.

Vera Iwerebor's "Baby Peggy: The Elephant in the Room" tells Cary's story and aims to return her to something like the prominence she deserves in the history of silent film. It is a simple, succinct documentary. It lasts less than an hour and is composed principally of archive film footage, talking head interviews with Cary and still photographs. (On DVD, the film is accompanied by the feature-length "Captain January" and three Baby Peggy shorts.)

The woman we watch in the modern day scenes would be worthy of a documentary even if she had not been Baby Peggy 90 years ago. Cary is energetic and intelligent, and at times seems only to speak in pithy insights. (Of her parents she says, "I was a blight on their romance, because I put a kind of reality in their life that they couldn't cope with.") She has a rare kind of wisdom that comes from having lived for almost a century and from having possessed an alert mind and retentive memory throughout it all. As a child she was remarkably precocious. As a nonagenarian she is remarkably youthful. She looks at least 20 years younger than she is and has the self-confidence and easy erudition of someone who was highbred and over-educated, neither of which she was.

Her father was a cowboy and sometime stuntman in silent movies. A staunch disciplinarian, he believed Peggy's appeal was due not to any star quality innate to the child but to the strictness of his parental regime. Peggy's parents were by turns clueless and cruel. She received no schooling. Her father spent most of the money she earned, although what he spent it on is not always clear. When he broke Peggy's contract after quarrelling with the Hollywood studio head who refused to pay her for "Captain January," her career ended abruptly and the family was essentially run out of town.

She was thrust into work in vaudeville theaters whose advertisements boasted that their child star appeared all day "in continuous performance." She hated it and saw it as a kind of slavery. She rejoiced when talking pictures threatened to supercede vaudeville but when they did she was soon back in Hollywood. Her career in talking films never blossomed and she worked as an extra until her father bought a ranch with her fortune and moved his family to it. His mismanagement, and the Great Depression, plunged them into penury. They worked fruitlessly on the failing ranch and the career of Baby Peggy was never mentioned. It became the elephant in the room.

The general story is familiar, perhaps even predictable, to anyone who has ever read about child stars, but seldom has it been told with such intimacy and immediacy. Few people can ever have reflected on the fate of child stars as thoroughly as Cary, or had as much reason to do so, and her unique insight gives the film a vibrancy few documentaries about silent cinema can match. There is no one else alive able to articulate the experiences she discusses.

To her, Baby Peggy is another human being, a role she performed, to be spoken about in the third person. This is unsurprising, given the gulf between the infant who was onscreen in the 1920s and the elderly woman who looks back at her from the 21st Century. But what is surprising is that she thought of Baby Peggy as a separate person even when she was a child. Even at four-years-old she knew the responsibilities attached to playing Baby Peggy, onscreen and in life, and she knew that made her something more, and something less, than a child. "I thought I was a grown-up," she says. "I knew I was the breadwinner."

Forty years later, looking at her young son, she felt surges of resentment towards him because he was simply sitting and playing on the floor of their house. Why, she wanted to demand of him, was he not out working? The psychological cost of being Baby Peggy was severe. By the end of the film, we don't see Diana Serra Cary as an actress or a historian, we see her simply as a survivor.

"Baby Peggy: The Elephant in the Room" is available from Milestone Films. 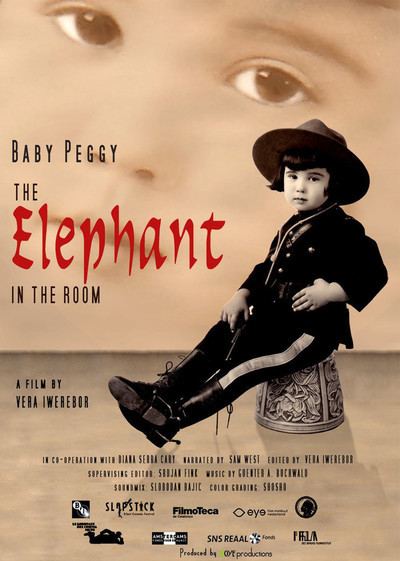 Baby Peggy as Herself (as Diana Serra Cary)

Paul Petersen as Himself