What would happen if humanity completely lost the ability to sleep? This simple catastrophic premise opens the world of Mark Raso’s “Awake” to all sorts of chaos, as humanity descends into madness with each waking moment unless a miracle cure can be found in just a handful of days.

It turns out that the cure may rest in a bright-eyed young girl named Matilda (Ariana Greenblatt). Somehow, she’s one of a few souls still able to sleep. She was in a car accident with her mother Jill (Gina Rodriguez) and brother Noah (Lucius Hoyos) just as a solar flare wiped out most human technology. Briefly, it looked like the little girl may have drowned from their car careening into a lake, but she miraculously survived. While the family avoids tragedy on that first day of the apocalypse, it’s just the beginning of humanity’s descent into sleep-deprived mania. Jill, a wayward security guard and a veteran with PTSD, learns from her job that psychologists and doctors are rallying to find a cure at a distant location. But having seen the torture Dr. Murphy (Jennifer Jason Leigh) inflicted on prisoners of war, Jill doubts she can trust the scientists to save her and her kids.

Raso, who co-wrote the apocalyptic thriller with his brother Joseph, keeps tensions high throughout “Awake” by compounding the stakes for our main characters. Not only does Jill have to fight off desperate zombie-like sleep-deprived assailants, she’s dealing with her own deteriorating acuity, plus that of her son’s decline and the hordes of people who want her daughter to see if she can restore their sleep. There’s a “Bird Box”-like essence in the “desperate mother saves her kids from untold evils” approach, but Raso and cinematographer Alan Poon give “Awake” a brighter color palette to work with, and the characters don’t look like they’re plunged into darkness until the grim end. The Raso brothers’ story touches on many ideas, like Jill’s traumatic wartime experience and her tumultuous return to the civilian life, the human instinct towards violence in times of a crisis, and finding hope for the future in a younger generation. Sometimes, these ideas can feel insufficiently explored for the sake of moving the story to its next altercation.

In “Awake,” Rodriguez plays Jill with such forceful determination that when her mental health declines, the change is drastic. Her body language shifts from that of an action hero and combat training to someone near death, complete with a hazy unfocused stare, heavy limbs and unable to hold herself up. The character’s relationship with her son Noah begins on a strained note but subtly and gradually shifts during the movie, giving Hoyos the chance to play both a moody teen resentful of his absentee mom and one humbled by tragedy, the eldest child stepping up and taking care of his mother. As heartfelt as Rodriguez’s performance is, she’s almost outshone by her youngest co-star, the ten-year-old Greenblatt. Greenblatt is her own force of energy, propelling the film's emotional scenes. Greenblatt has a number of tough moments and meets each challenge on its own level.

There are a handful of moments that don’t quite work as well as the family drama at the heart of “Awake.” A few special effects looks terribly fake, like a starry night background that pushed my mind away the emotional moment playing out in front of it. Leigh’s brief appearance as Dr. Murphy reunites the actress with her “Annihilation” co-star Rodriguez, and Leigh’s character seems to be a spiritual successor of sorts to the character in their previous film, tight-lipped and commanding, but Dr. Murphy’s part in the story seems slight in comparison.

“Awake” has just enough scares and strangeness, plus a sense of dread and paranoia, to make its horror creepy and enjoyable. It’s not a flawless thriller, but enough different elements click into place, like Rodriguez and Greenblatt’s performances. There's also the storyline weirdness that the Rasos included from their research on sleep deprivation, about how the few days it takes to destroy one’s mind fly by at a quick pace. At the center of violence and chaos, one family’s drive to stick together keeps them sane and grounded. 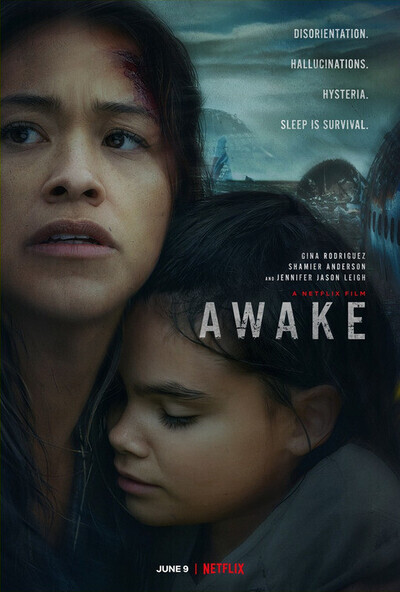