The voices of the two boys convicted of sexually assaulting their high school classmate Audrie Pott, after defacing her passed-out body with crudely written messages in green marker and then sharing said photos on social media, are flat, dull, and sometimes hesitant as they describe what happened that night. Their words are inadvertently revealing about the mindset of people who think that this behavior is in any way okay. The boys are in big trouble but they are slightly confused as to why. Shown in animation to hide their identities, the boys' interviews with Bonni Cohen and Jon Shenk, husband-and-wife co-directors of the documentary "Audrie & Daisy," were part of the boys' plea bargain, and so the boys are strangely passive, submitting to the questioning in a calm and clueless way that is extremely unnerving. The entire documentary is unnerving. Focusing on four separate rape cases with eerie similarities, "Audrie & Daisy" is a stark portrait of a problem which is not in any way local, aberrant, or random. The problem is systemic.

Audrie Pott had no memory of what happened the night of the assault, but she heard rumors about it, and rumors that pictures of her naked body were everywhere. She experienced nonstop harassment on Facebook and everywhere else. Audrie sent increasingly pleading texts to one of the boys involved, a boy she thought was her friend, begging him to tell her what happened: "U have no idea what it's like to be a girl." The bullying was so relentless that Audrie Pott committed suicide eight days after the assault.

Another girl interviewed, Delaney Henderson, had a similar thing happen to her, and expresses regret that she hadn't reached out to Audrie when she first heard about it. Maybe it would have helped Audrie to know that this had happened to someone else. When another case hit the news in a much bigger way, generating national attention and outrage, especially once the authorities chose not to prosecute the boys, Delaney wasted no time getting in touch with Daisy Coleman, one of the girls who had been raped. Daisy experienced an onslaught of harassment and abuse so bad that she tried to commit suicide multiple times and her family eventually had to move.

Cohen and Shenk (whose previous film was "The Island President") move around between these stories, which took place in different towns across the country, using on-camera interviews, police interrogation footage, original news footage, and the animated interviews with the boys who had raped Audrie Pott. (The animation is a slightly unnecessary distraction from the boys' voices and what they say.) There are screen-grabs of some of the online harassment these girls received, so vicious that you wonder what on earth is wrong with people that they would send texts like that to a 15-year-old girl. There are interviews with the local authorities in the Daisy Coleman case, revealing the official attitude that explains why the boys were released with slaps on the wrist. The priority was that the boys' futures were not ruined by the girls' accusation. The sheriff says, "Nothing that occurred that night rose to the level of the crime of rape." The sheriff has two daughters. How would he feel if something like this happened to them? We saw the same depressingly familiar situation play out yet again in the Brock Turner case, where a boy's future was valued over justice for a girl who had been raped while she was unconscious. How can there be confusion about consent in such a scenario?

One of the clear conclusions of "Audrie & Daisy" is that: If you are a boy and you screw up, the response will be "boys will be boys," and there will be an organized effort to get you back on track. If you are a girl and you screw up, you will be thrown to the wolves. No one cares. You will be blamed. And—in the case of Daisy Coleman's family—your home will be burned to the ground in retaliation for what you have done to those nice boys.

The girls are open and forthcoming in their interviews, although still traumatized, and people like the sheriff are so open in answering questions that they don't seem to realize how damning their comments are. This is a testament to Shenk and Cohen's gift as interviewers. One of the most important interview subjects is Charlie, Daisy's older brother, who was friends with the boys who assaulted his sister, who was in a rage when he heard what happened. Charlie is an athlete, shown lifting weights, his body covered in tattoos. Everything he thought he knew—about himself, his friends, and - most importantly—about what it means to be a man—changed. It was like a light bulb went off in his head. Now a Little League coach, he is aware that boys need guidance in this area, because society is obviously dropping the ball with them. He tells the kids on his team, if he hears them disrespecting or smack-talking girls: "That's not what we're about here."

There could have been more exploration on the role that social media played in all of these cases, and what constant bombardment like that does to a person's actual perceptions of events (especially a young person). A 14-year-old kid is not going to say to herself "this too shall pass" anyway, she's only 14, but when the bullying happens 24/7, when there is no break from it because nobody ever leaves the Internet, how does that magnify the abuse? How does that intensify the feeling that abuse like this is forever, no one will ever forget?

Daisy Coleman, a fragile young woman, has found the strength to help others, to become an advocate. She is an artist, and through her art she works out her feelings about what happened. She got a tattoo of a semi-colon on her wrist. Why a semi-colon? Because, she says, a semi-colon means: "That's not the end." 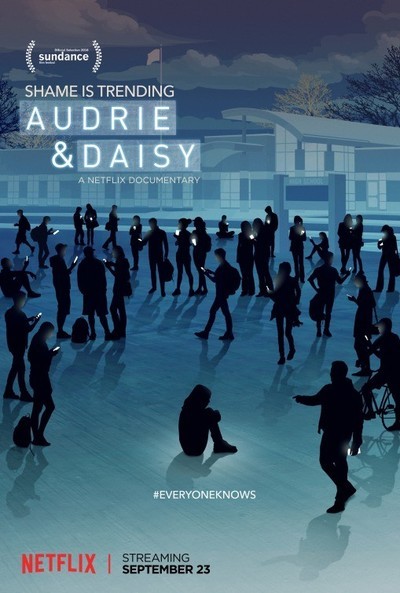 Daisy Coleman as Herself

Jim Fall as Himself - Mayor, City of Maryville

Delaney Henderson as Herself