Asura: The City of Madness

For fans of fictional cinematic locations that are rife with corruption and where absolutely no one is innocent—your Twin Peaks, your Sin City, your wherever-the-hell-“U-Turn”-was-set—Annam, the city at the center of “Asura: The City of Madness” should definitely land a place on your next itinerary. This decidedly dark and super-violent South Korean crime drama from Kim Sung-su tells a tale so jam-packed with betrayals, double-crosses and alleged authority figures that even the most dedicated of genre buffs may find it too unrelentingly grim and cynical for their tastes.

Although our first glimpse of the grim cityscape of Annam is not particularly inspiring, we soon learn that with the recent departure of a former U.S. Army base, there is now a large piece of land ripe for lucrative redevelopment. However, the insanely corrupt Mayor Park Sun-bae (Hwang Jung-min) has determined that he should personally pocket as much of the profits as possible and is cheerfully willing to destroy anyone who even dreams of getting in his way. Helping to enforce the mayor’s whims is Detective Han Do-kyung (Jung Woo-Sung), a misanthropic cop who does his dirty work and is about to leave the force to officially go to work for him. Unfortunately for Han, when the aftermath of an attack on someone daring to sue the mayor goes as badly as can be, prosecutor Kim (Kwak Do-won) blackmails him into providing proof of Park’s corruption within a week or he will wind up going to jail instead. Lest you think that Kim is some kind of noble crusader, he is only doing the bidding of his boss who, as it turns out, is in the employ of Park’s enemies.

This seems straightforward enough but there are plenty of complications to quickly make Han’s life a blood-soaked hell. For one thing, not only is Han also dealing with the problems of a terminally ill wife (not that he actually loves her in any detectable manner) but she is also Park’s half-sister. Then there is the matter of Sun-mo (Ju Ji-hun), an initially unwitting rookie cop that Han brings in to help deal with Park in order to get the required information. Seemingly naive at first, Sun-mo takes Han’s lessons a little too much to heart and ends up replacing him as Park’s favorite after dispatching a couple of enemies in an exceptionally insane manner. Before long, there are so many people on the take with so many conflicting agendas that whenever Han enters a room with more than three people in it, not only is it impossible to determine if he will still be alive in the next five minutes, there is an excellent chance that everyone’s allegiances will have completely shifted in that time to boot.

Kim and Jung first worked together in the ‘90s on “Beat” and “City of the Rising Sun,” which were also gangster films but ones that, based on their descriptions, appear to be more conventional genre pieces celebrating the usual stuff about honor among thieves. Needless to say, there is not even a shred of that to be found here—the world depicted in “Asura” isn’t so much dog-eat-dog as it is dog-strings-along-brutally-tortures-and-then-eats-dog. Not that any of the characters seem to be having any fun with their corruption before meeting their inevitable fates—Han is consumed with anger and self-loathing, Park is barking mad and all the other characters that we see are somewhere in between. In lesser hands, this might have become monotonous after a while but Kim has a few aces up his sleeve. One is the clever notion that Kim’s need for more information on Park proves to be in inverse proportion to Han’s ability to supply it once Sun-mo supplants him in the pecking order. There are also a number of impressive action set pieces to be had here, including one of the more hellacious car chases to hit the screen in a while.

“Asura: The City of Madness” is probably not for everyone—the relentlessly bleak tone, over-the-top violence and elongated 136-minute running time may prove to be too daunting for many audiences after a while. However, those with a taste for hardcore action, storylines filled with characters who are not exactly overflowing with moral integrity and a skyrocketing body count will probably get a kick out of it. They will certainly get a kick out of the Grand Guignol finale, in which the large cast is dramatically reduced in size during an elongated sequence in where they go after each other with guns, machetes and hatchets in a massacre that eventually finds the few survivors crawling through the rapidly expanding pools of blood on the floor. The good news is that this bloodbath is located entirely within the walls of a funeral parlor, making both the cleanup and transportation of the corpses relatively easy. Trust me—in the world of “Asura: The City of Madness,” this is about as close to common consideration as things are ever likely to get. 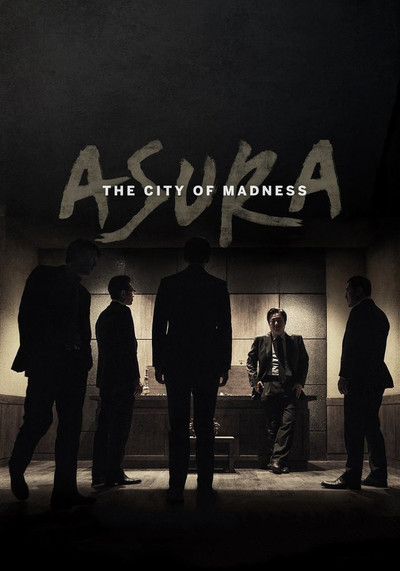 Jeong Man-sik as Do Chang-hak