"Asako I & II," the latest drama written and directed by Japanese filmmaker Ryusuke Hamaguchi, often seems to be about the private, day-to-day performances that young lovers put on for each other. Hamaguchi and co-writer Sachiko Tanaka (adapting Tomoka Shibasaki's source novel) present Asako (Erika Karata), a young woman who tries to maintain a relationship with her devoted boyfriend Ryohei (Masahigro Higashide), as a woman who is acting for her partner and herself. Ryohei is, sadly, not Asako's romantic ideal: Baku (also Higashide), a physically identical old flame who left without warning, is the man that Asako can't stop thinking about.

Or, at least that's what we're led to assume. A lot of Hamaguchi and Tanaka's bigger ideas are communicated through open-ended dialogue; their characters express regrets about their inability to connect, and quietly try to make do. But while Asako and Ryohei often verbally speak for themselves, their routines (or, more accurately, their frustrated attempts at keeping up with their routines) are meant to speak louder than their conversations. Makes sense; I just wish these characters said more about what they're afraid of learning about each other, and less about what their creators presume to know about the fragile nature of romantic attraction.

To be clear: "Asako I & II" is not a bad movie, just one that doesn't convey much beyond its creators' intentions. There are moments of poetic beauty scattered throughout, like the few scenes that don't push the otherwise cloud-light plot along. Ryohei tries to help a traumatized (and non-communicative) bystander in the middle of the 2011 Tohoku Earthquake; Asako gives her lover a massage, starting at the balls of his feet, and working up to his (nonexistent) calf muscles; a late-night bus ride leaves Asako looking at a hazy, dark sky; a chandelier crashes on a small theater stage. These moments will stay with me, mostly because of their relaxed pacing and stark iconography.

Unfortunately, these segues are brief and rare. Most scenes in "Asako I & II" play out in real-time, but few seem to take place in the real world. Asako and Ryohei are frequently confronted by supporting characters like insecure actress Maya (Rio Yamashita) and unsentimental childhood friend Haruyo (Koji Nakamoto). But the commentary that May and Haruyo provide, either directly or indirectly, doesn't meaningfully contextualize Asako and Ryohei's otherwise un-examined anxieties. "Guys don't fall for girls like Asako at first sight," Haruyo says. Ok ... but why not? And what does Maya mean when she, defending herself from a cutting remark about her "cheap, narcissistic acting," explains that "everybody does that," meaning that everybody "just [uses] the audience to be the center of attention." These tangential questions only reveal so much about the lives that Asako and Ryohei are afraid to be living. Are they shallow and unmotivated, beyond their shared need to be seen and grounded by a partner who cares enough to motivate them? Says who and by what standard?

So while Hamaguchi and Tanaka's characters are not introspective by nature, they're also not supposed to be kiddie-pool shallow. I had a hard time telling the difference as I watched "Asako I & II" because most of the movie is concerned with the placidity of its characters' go-along-to-get-along attitudes. Asako and Ryohei's mutual affection is apparent by the actors' body language, but that's ostensibly not enough to sustain an authentic relationship. Then again: I could only tell so much from Hamaguchi and Tanaka's jarring, but not quite destabilizing interjections, like when Ryohei wonders aloud, "It's like I'm back to square one. I don't understand why," or when Asako insists "I'm not admirable. I wanted to so something that wasn't wrong."

I honestly don't know if there's much to "Asako I & II" beyond some finely directed and performed scenes of discreet heartaches, many of which aren't sensible to anybody but the actors or their characters. There's just not a lot going on underneath the surfaces of these characters' sensitive, precise, and modestly expressed feelings. I believe that people like Asako and Ryohei exist; I just haven't met them yet. 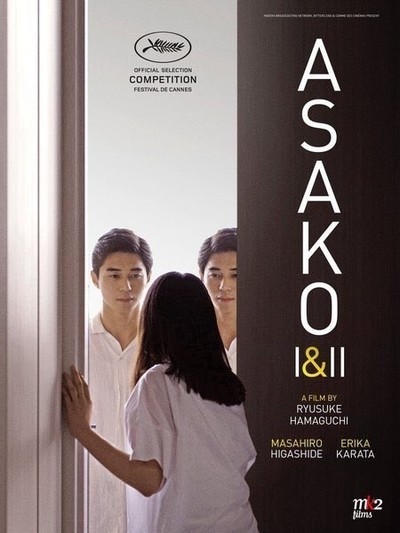