In “Armageddon Time,” people keep trying to wake up 11-year-old Paul Graff (a sensitive performance by Michael Banks Repeta). Paul is a slight, dreamy sixth grader in 1980 Queens, New York. Over the span of two months, from the first day of school until the family watches the returns of the Presidential election in November, we repeatedly see Paul in a deep sleep as various family members try to get him out of bed. His father, Irving (Jeremy Strong), dances in Paul’s bedroom. His older brother Ted (Ryan Sell), jumps on his chest. His mother (Anne Hathaway) tells him to get ready for school.

These awakenings punctuate Paul’s other awakenings, some he recognizes at the time, some seen only in retrospect by writer/director James Gray, who based “Armageddon Time” on his own experiences. Like “Aftersun” this is a movie by an adult bringing a deeper understanding to memories of the past. And like many other stories about 11 to 12-year-olds, from Dorothy in “A Wizard of Oz” and Riley in “Outside In” to Harry Potter and Tom Sawyer, these last moments of childhood are opportunities to explore the ineffable tenderness of the time when the world seems filled with endless possibilities; when we are just beginning to discover how much of it is also filled with complications, disappointment, and loss. As in another autobiographical memory movie about schoolboys, Louis Malle’s “Au Revoir Les Enfants,” “Armageddon Time” is the story of childhood innocence as remembered with regret and a sense of responsibility, with adult recognition of history’s vilest bigotries and injustices

Paul lives with his parents and older brother. He spends a lot of time with his supportive grandfather (Anthony Hopkins). They adore each other, and Paul considers him his greatest ally and wisest advisor. When Paul tells his parents he wants to be an artist, they tell him he has to do something less risky. But his grandfather gives him a set of grown-up paints. Paul overhears his parents say he is not as smart as his brother and will not have the same opportunities for what they most want for their sons, “a seat at the table.” But his grandfather encourages his dreams.

Paul makes a new friend at school. He is Johnny Davis (Jaylin Webb), the only Black student in his class, bigger than the other kids because he is repeating the sixth grade. They bond over both getting in trouble on the first day, Paul for drawing a caricature of the teacher, Johnny for being disrespectful to the teacher who constantly belittles him. The next week they escape a school field trip and have a blissful day in Manhattan. But they get into more trouble. Paul’s parents switch him to a private school, the posh Kew-Forrest. It's where Fred Trump sent his children, future judge Maryanne, and future President Donald. On Paul’s first day, Fred Trump sits in the audience as then US Attorney Maryanne Trump (Jessica Chastain) lectures the students on ambition and achievement.

Paul’s grandfather tells him that he must be “a mensch,” a person of integrity and character. A mensch always stands up for those who are being abused. He tells Paul about his own mother, who was a teenager when Cossacks killed her parents because they were Jewish. But Paul feels pressure from his parents, who do not want him to see Johnny because they got in trouble together, and from the casually bigoted students at his new school. He wants to fit in. And he is presented with increasingly complicated and difficult situations that present challenges to mensch-iness.

The sincerity and good intentions of the movie are palpable, as are its ambitions in bringing in the election of Ronald Reagan and the future prospect of Donald Trump as connected to the difficulties faced by Johnny and the challenges of being a mensch. The film creates a vivid and evocative sense of its time and place and many scenes, especially those with Repeta and Hopkins, are touching. Hathaway as the mother is affectionate, amused, and sometimes indulgent with Paul. The shift as she defends him to the principal and then once they are out of his office, when she can say what she really thinks, is one of the movie's best scenes. And she is deeply affecting when it is clear to us, if not to Paul, that she has had some very sad news.

But the film is less than successful in creating other authentic characters. Strong's father is abusive or gentle and understanding as the storyline needs, a change not adequately justified by what he has experienced. The brother and public-school teacher roles are near caricatures.

Most troubling is the script’s failure to give us a fully realized, authentic character for Johnny. The movie is in large part an apology to Johnny and to all of the other kids like him who were not adequately cared for at home and who were constantly mistreated by all of the people and structures that should have been supporting them. It is heartbreaking to see Johnny insulted by his teacher and by older Black kids who scoff at him for dreaming of working for NASA. Why wouldn’t he want to get as far away from this planet as he could?

Webb is an affecting young performer, and he says a lot just with his eyes. His face lights up in those few moments when Johnny has a sense of hope and connection. But Johnny’s character is underwritten, a collection of attributes more than a personality. He is not given the same interiority we see in other characters and that feels like just another way of letting him down.

Now playing in select theaters, with a wide release on November 4th. 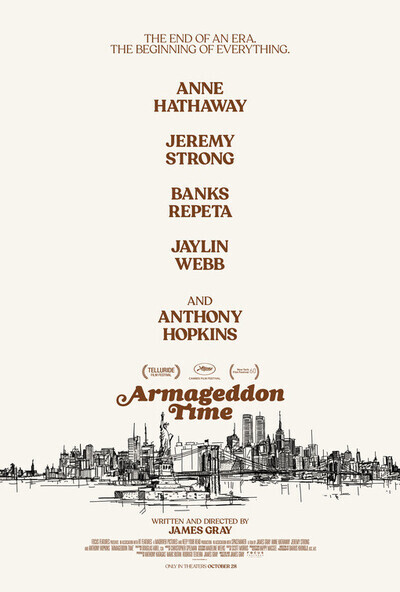 Rated R for language and some drug use involving minors.