The moments that change and shape our lives don’t always feel seismic. Sometimes they do—a gun goes off, a vow is broken, a bold pronouncement is made—but others seem more ordinary, just another scene in an existence full of them. Changes of both sorts emerge and erupt over the course of Lynn Shelton’s “Outside In,” a quiet, deeply empathetic film written by Shelton and star Jay Duplass, but for the most part, it’s those small changes we see. With few exceptions, the seismic events in “Outside In” occur before we meet the players, leaving the film free to focus on the shifts that are internal. Such moments go unheralded, but can be transformative all the same, and in the hands of a great actor, they can tug just as insistently at your heart, your guts, or the pleasure centers of your brain.

“Outside In” has one such great performance, and a spare handful of good ones. Carol (Edie Falco, remarkable) has spent 20 years accomplishing a complicated, high-stakes task. Though it results in her neglecting her teaching work, her daughter Hildy (Kaitlyn Dever), and her husband Tom (Charles Leggett), she achieves her end, and former student Chris (Duplass) is released from prison after serving two decades of an unjust sentence. He’s greeted with everything from discomfort to fascination by the people in his orbit, whose lives have continued on without him; his brother Ted (Ben Schwartz) emphasizes the discomfort by attempting to mask it with a kind of jubilant unconcern. Only Carol looks for the man Chris is now, rather than the one he was 20 years ago. But the connection they’ve forged over all those years may be too complicated—or perhaps too simple—to survive on the outside.

As Shelton’s film meanders forward, it’s fairly easy to identify which story threads will be significant, and where those stories might end. Hildy befriends Chris, who’s pining for her mother; Carol attempts to reconnect with her husband, who pushes her away in irritation; Ted brings home an unwelcome figure from Chris’s past, sparking the first of many uncomfortable spats. What makes “Outside In” compelling isn’t the way these stories move toward their inevitable conclusions, but in how these characters experience their journeys. Falco, unsurprisingly, is particularly adept at this. After Carol first picks up on the romantic aspect of Chris’ connection with her, she confides in a co-worker, and while she underplays the situation as a “crush,” her obvious pleasure, confusion, and guilt tell us more about her emotional state than a handful of expository scenes ever could.

That’s just where Falco gets started. It’s a formidable, vulnerable, and subtle performance, and the film’s final act should be mentioned in any conversation about the best work in her career. Still, she’s not alone in doing good work, though she’s the clear standout. Dever and Schwartz play characters not nearly as well developed as Falco’s, but they each turn in compelling performances, playing wounded people who hide their wounds well, but who experience paradigm-shifting moments on an intimate, largely internal scale. Duplass’ performance, on the other hand, veers a bit, alternately frustratingly unspecific and heartbreakingly alive. He’s at his best when Chris is alone, quietly experiencing the world from which he was shut off for so long.

It’s no coincidence that those lonely scenes are among the film’s best. While “Outside In” lacks some of the off-kilter humor for which Shelton is known, it makes up for it in gorgeous, restrained filmmaking that reflects Chris’s isolated reality. Shelton and cinematographer Nathan M. Miller capture Chris’ Pacific Northwest town in two modes: the first, a place that wears every day of its age on its face, all cracked paint and yellowing vinyl; the second, a wild, gray-skied landscape with towering trees and spaces so vast it seems as though the whole place were made of fresh air. Both are aesthetically beautiful, but more importantly, they each echo a specific facet of Chris’s new life. His world has left him behind, but he’s free.

In several scenes, Chris glides through town on his old BMX bike, which is covered in “20 years of rust,” as Chris puts it. In those sequences, Duplass shines, and so does Shelton. Even when Chris’s chest and stomach are out of frame, you can sense his enormous, grateful deep breaths, that beautiful sky framing his face as the tension leaves his neck. It’s a feeling emphasized by Andrew Bird’s excellent score. Both the music and the film hit a very particular sweet spot, in which something painful is made both easier and more difficult to bear because the pain is beautiful. It’s because the world is beautiful, even when it’s not. Just as the songs of Sufjan Stevens gave “Call Me by Your Name” a lovely, aching sting, Bird’s compositions draw out everything that hurts in “Outside In,” like cold, crisp air in the lungs on a gray but beautiful day.

Shelton and Duplass may not stray very far from the path which, at the film’s outset, they seem likeliest to take, and not every moment along that path lands quite as well as it could. But like Bird’s score, “Outside In” knows how to take us from the outside and bring us, well, in. The key is finding those moments that quietly reshape a life and revealing how acutely they’re felt. A hug is tense, until it isn’t. A work of art is tentatively revealed. A hay bale is encountered, and it smells sweet. Those moments can change a life, they can shape a story, and they can absolutely make a slightly uneven film well worth watching. 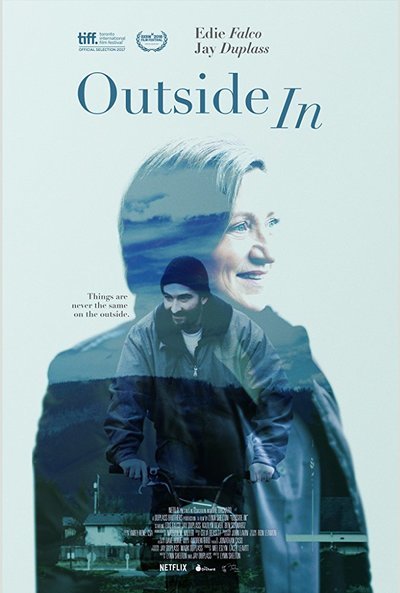