Deep in a snow-covered forest in Japan, George (Theo James) is on a lonely mission to restart a decommissioned base. It is an unwelcoming concrete palace, as cold on the inside as the weather outside—like a spaceship plopped on another planet. As George returns from a brisk run, he greets the two robots he built for company and checks in with his curt boss, Simone (Rhona Mitra). He finds some comfort away from work talking to his dead wife, Julie (Stacy Martin), through the Archive, a “2001: A Space Odyssey”-looking monolith turned casket that allows the living to talk to the dead for a few more hours. Time is running out before she will go silent forever, and in his spare time, George works on his third prototype to house her personality for a chance at resurrection. Unfortunately, that brings out the jealousy in one of the other robots and the suspicions of the company behind Archive who don’t seem thrilled about George’s data breach to create his version of Frankenstein’s monster.

Gavin Rothery’s “Archive” is a somewhat unwieldy sci-fi thriller to get into. The plot twists are many, and so are the cliches. In its attempt to create conflict, it dips into sexist tropes that diminish the story. Then, it unravels them with the last few minutes, and it’s those last few minutes that changed my perception. The question each viewer will have to answer for themselves is if can they get past the movie’s male fantasy aspect for that final reveal.

Debut writer/director Rothery, who comes from the art department world, draws from various sci-fi movies to create the forlorn look of “Archive.” Its influences can be traced back to movies like “2001: A Space Odyssey,” or “Blade Runner” in the way it blends American characters against the backdrop of a Japanese restaurant and big light-up ads. Plus, some robot designs from “Star Wars” and “Metropolis” are thrown into a narrative mix of “Ex Machina” meets “Solaris.” The themes of those latter two movies are certainly prevalent. In a sense, George is a mad scientist trying to resurrect the dead through science and technology, going through several prototypes in the process for his perfect companion like in “Ex Machina.” The unforgettable wave of grief, ghost visitations from his wife and the movie’s inescapable sense of loneliness owes much to the Russian classic, “Solaris.”

Here is where things get a little uncomfortable. George is mostly alone except for the three robotic prototypes he created to save his wife’s essence. The first attempt left him with a lumbering gentle giant much like a toddler who can’t speak. The second looks something like the ASIMO robot, and acts like a petulant child when his attentions move on to creating a more humanoid version, which of course, is smaller, skinnier, and more conventionally attractive. Sure, there’s a moment when George explains that it’s the third prototype’s brain power that convinced him she’s the one to carry his wife’s being. But it seems like a weird design flaw in the story not to create models like the one you’re looking for in the first place. There are other befuddling gaps in the script, including when an actor has to say this gem in a very serious manner: “I’m a risk assessor. I assess risks.”

There’s also the issue that George christens them all sisters and tries to get them to unite for the purpose of bringing Jules back. They each have varying degrees of his wife in them somehow, so I guess that makes them sister wives. Definitely odd. And when the second prototype goes HAL 9000-levels of jealousy and tries to sabotage the whole experiment? It's predictable and tired. It has nothing to do with how apparently this Archive process was done against her consent or what it might mean to override a sentient feeling robot with dreams of its own (hello, “Blade Runner”!) with another entity. It’s more because she’s jealous and insecure, ready to destroy her competition even if the competition is related to her in some strange way. It’s also because some women have to tear each other down or lose themselves to prove their love, right to the point of self-destruction.

Yet somehow, Rothery turns this all around in the last few minutes into something that left me genuinely stunned. With the help of cinematographer Laurie Rose, Rothery achieves an isolated and gloomy look without draining the color out of the screen. Instead, the red, yellow, and white lights of the facility, and the extensive art and production designs sell this ambitious film's illusions. There’s even a cool, if slightly creepy, montage of George bringing the robot to life that’s quite impressive. As the movie’s central character, James plays George with the utmost stoicism in the present day, making the flashback memories to happier times with his character’s wife a necessary addition. It gives him the emotional backstory his tightlipped character won’t speak of, and shows us just how much he’s lost and how he’ll stop at nothing to bring her back—even if it means creating Frankenstein’s jealous monster. 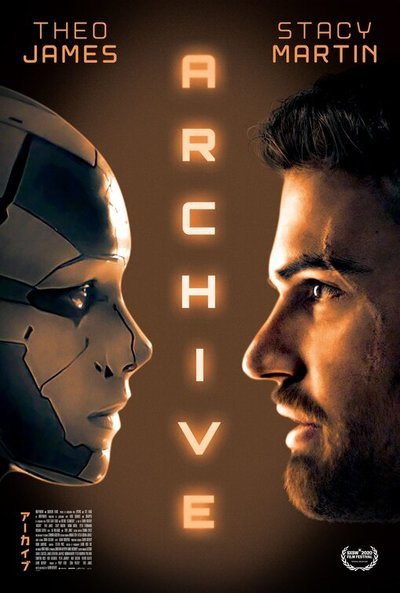