Arabian Nights: Volume 3, The Enchanted One

In the third and final section of his “Arabian Nights” cycle, “The Enchanted One," director Miguel Gomes finally invites us to consider the influence of Pier Paolo Pasolini. Pasolini’s final film, the bountifully grim “Salò," has come to dwarf much of his earlier work, but just before he turned away from the beauty of existence, he directed his trilogy of life. “The Canterbury Tales," “The Decameron” and “Arabian Nights” were each omnibus films comprised of erotic and comic tales of ancient cultures, and they shared a love for endless, dirty landscapes, naked, idealized bodies and the art of storytelling itself. After two film’s worth of parable and metaphor, Gomes’ lets Pasolini’s own “Arabian Nights” influence his images, as well as his structure. As the themes, characters and ideas from the first two parts begin to reappear, so too do full-figured women and gorgeous, semi-nude men right out of the earthly kingdoms of Pasolini.

“The Enchanted One” starts with Scheherazade (Crista Alfaiate for a third time) and her father, the Grand Vizier, both filled with regret and longing. The old man wishes to free his daughter from her marriage to the bloodthirsty king, and misses his long dead wife, whose ghost dances in his mind’s eye. Scheherazade dreams of the country she will die to protect, and its many humble subjects. She leaves the kingdom and encounters a diver named Lionel who loves her from afar, a flamboyant genie of the wind, Elvis the bandit, who steals to live and dances for fun, and blonde pin-up Paddleman. Paddleman looks like he swam right out of Pasolini’s subconscious, from his curly mop to his ruddy skin and svelte figure, to his charmingly dim wit. When his children ask him questions, Paddleman stares dumbly while Scherehazade answers the questions his children pose about the nature of the world. Paddleman and Scheherazade find an archipelago of thieves and listen to psychedelic Tropicalia while the sun goes down. But Scheherazade knows this peace cannot last, and after telling Paddleman that he’s far too dumb to settle down with (but, she hopefully tells him, “you are somewhat radiant”) she leaves the archipelago. She has one more tale to the tell the king.

“The Inebriating Chorus of the Chaffinches” is the last story Scheherazade tells. It’s an hour-long documentary about a songbird competition, the center of many men’s lives. It’s a fascinating chapter of the movie, but also, formally at odds with everything that’s come before it, so it may wind up being any given viewer’s favorite or least favorite chapter, depending on how well the ambling post-modernism of the build-up has sat thus far. The dry objectivity Gomes adopts makes “Chorus” the least engrossing, grammatically speaking, of all of the strands of “Arabian Nights,” however, the tale of the chaffinches is undeniably rich and tragic.

The birds were discovered by Portuguese soldiers in the trenches of World War I, and brought home, one presumes so that their song could brighten the lives of every battle scarred man returning from the front. The training of the birds, pulling specific forms of song from each generation of finch, has taken up the free hours of hundreds of men since those days. In the 90s, a whole generation of finch were killed in an accident and that song will never be heard again. Gomes believes that the men who train the finches now are haunted and obsessed by the lost song, which is a neat little metaphor for so much of the culture obliterated by the government’s economic austerity. When one of the birder’s breaks down crying after the death of his prized finch, we know why he loses his cool in front of his peers. The song of the finches is precious and unique to each bird. When they die they take the song with them, never to be heard again.

The competition ended, champion birdsman Chico Chapas (you may recognize him as the murderous bandit in hiding from “The Desolate One”) playing himself this time, walks home. He encounters a genie in the shape of a 60-year-old man caught in a net. He frees the man after admonishing him to be careful. Life is delicate. And to prove his point, Gomes cues up the Langley Music School Project’s cover of Klaatu’s “Calling Occupants of Interplanetary Craft,” a song that many people believed was written by the Beatles after they’d broken up. Sung by children, the desperate hope of people who wanted more enchanting music from artists who’d defined a generation becomes even more poignant. Someone thought that by teaching the song to children, maybe these songs would outlast their cultural half-life. This pursuit drives Gomes’ cinema. As the grand vizier tells Scherehazade, “Anger is not a bad thing, if it’s well directed.” This was what drove Pasolini to make films and what drives Gomes now to make his own Trilogy of Life. He saw Portugal—the woman, the bird, the song, the place, the mindset, the series of dreams—in danger of being silenced. So, he raised his voice to the air, turning his anger into a beautiful tapestry of the past and present, hoping that in the future none of the esoterica that defined the country in which he grew up would be lost.

There’s a weird sense to be made out of the bifurcated structure of “The Enchanted One." The first act, in which Scheherazade encounters the disparate denizens of her kingdom—laments her place as the one who must tell stories—serves two functions. First, it captures Gomes’ powerful sadness at being the lone keeper of the record of Portugal’s history in cinema, or at any rate, the one with the highest profile on the international festival scene. If he won’t do it, who will? And second, it is also the most beautiful portion of the entire six-hour “Arabian Nights” project. Full of gorgeous people and vistas, hilarious tangents and washed over with a diffuse longing. Gomes plays with the traditions of the past and the tangible facts of the presents, hoping for a brighter future for his homeland.

“The Inebriating Chorus of the Chaffinches” is the very real evidence of the loss Portugal experiences with the passing of time, and how important memory and education are when maintaining a conversation with a country’s past lives. The finches themselves serve as a reminder of the horrors of war, and how it is more noble to pursue art to express oneself than to tear down the institutions we don’t agree with. After all, the terrible conditions of the current administration may have disenfranchised a nation’s workers, but Gomes would never have felt the need to chart so much of Portugal’s heritage without them.

My friend, critic Nick Newman, caught me earlier complaining that “Arabian Nights” won’t make a fraction of the box office it deserves as long as movies like “Star Wars: Episode VII - The Force Awakens” open against them. He gave me a piece of advice that encapsulates the spirit of this wondrous behemoth: don’t complain, write. Create something that sheds light on the important things we might lose if no one says anything. This is what Miguel Gomes has done. Early in “The Enchanted One," we hear these words: “To tell you the truth, there are many things I haven’t seen.” Thanks to “Arabian Nights," there’s a little less its audience doesn’t know, and a lot more it should want to. It’s not a unified Portugal, but it’s a start. 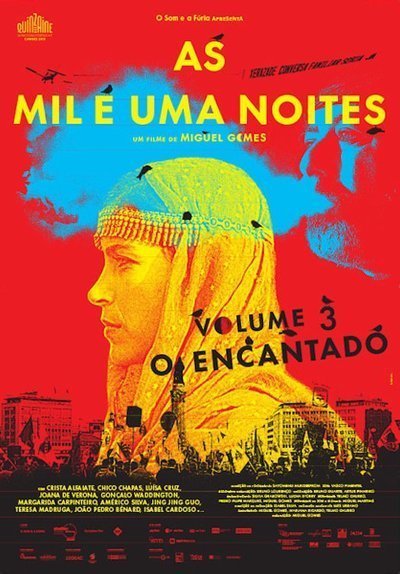