April and the Extraordinary World

It feels somewhat clichéd to call an animated adventure film a “delight,” but it’s the best word for the latest from GKids, “April and the Extraordinary World,” a joyful, accomplished movie that echoes “The City of Lost Children,” “The Adventures of Tintin,” “Metropolis,” “Howl’s Moving Castle” and something unique into a, well, delightful piece of work. More directly (and accurately) translated from French as “April and the Twisted World,” this Paris-set, alternative-universe adventure from co-directors Christian Desmares and Franck Ekinci is so remarkably fluid that it almost feels effortless. It’s a film that values intelligence in an increasingly scary world, and that’s a theme that works for any generation and in any language. (The film is being released subtitled and dubbed in several markets—for the record, I viewed the subtitled version with great voice work by Marion Cotillard and Jean Rochefort).

“April” opens over a century ago, imagining an alternate timeline that branches off when Napoleon III dies as a result of a science experiment gone awry. It turns out that Napoleon and his team were trying to develop a serum that would make their soldiers invincible. Playing God resulted in talking animals, but no immortality. When the mad scientist’s laboratory goes boom, it looks like his experiments have gone with it, but a couple of talking lizards escape, setting in motion only one element that will forever alter history.

The story flashes forward decades to a cold, steampunk 1931 Paris. A young girl named April (voice of Marion Cotillard) watches as her parents try to finish the invincibility serum started so many years ago. Of course, the government wants to get their hands on this God-like tool, leading to a chase scene that results in April being orphaned, her only companion her talking cat Darwin. Flash forward another decade (and it’s no coincidence that the bulk of this story lands in Europe in the era of World War II in “our” timeline) and April is trying to finish the experiment herself from a secret lair in the head of a statue. The police inspector who tracked her parents wants to find her—he never got April’s grandfather and is convinced that April’s parents are still alive—and, well, there are further surprises in store for April and her talking feline.

"April and the Extraordinary World" is a visually fascinating, even captivating film, alternating between incredible, painter-like detail and refreshingly simple hand-drawn lines (like a scribble for an eyebrow or an ear). The blending of shots that look like they could be framed art with lines that look almost unfinished calls to mind the work of Sylvain Chomet, the director of one of my favorite animated films this decade, "The Illusionist," and Hergé, who created “Tintin.” Based on the graphic novel by Jacques Tardi, “April and the Extraordinary World” feels both retro and new. It thematically and visually calls to mind serial adventures of generations ago, but it does so with its own modern voice, playing with timeless themes like the hope that the future will be better than the present and that our parents (and our pets) will live forever.

Filmmakers and artists have been imagining worlds in which industry and development are choking us for over a century, but “April and the Extraordinary World” carves its own path within this crowded subgenre of imaginative fiction. It’s got so many subtle themes and hidden joys that will connect with the parents of children who are just falling in love with the action of a well-told story. There was a time when the concept of the “inventor,” someone who used their brain power to make the world a better place, was as captivating to children as giant killer robots. “April and the Extraordinary World” weaves this idea—that it is our intelligence that will save us—into an action-adventure with more twists and turns than most Hollywood blockbusters. And a scene-stealing talking cat. For the right audience, it plasters a smile on your face, constantly offering new surprises to entrance and, sorry, there’s that word again, delight. 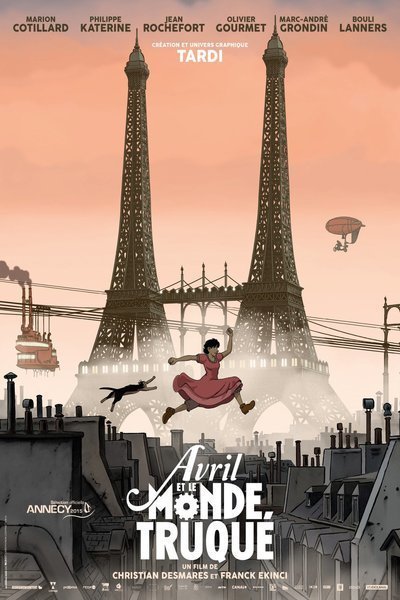 April and the Extraordinary World (2016)

Rated PG for action/peril including gunplay, some thematic elements and rude humor.