“Any Day” is a well-intentioned disaster, only slightly redeemed by a committed performance by Sean Bean, whose talent proves nowhere near enough to make this manipulative tripe more digestible. It is the kind of film that opens with “I Shall Be Released” and actually gets less subtle from there. Worst of all, what at first feels like a mediocre character drama becomes something more insidious when writer/director Rustam Branaman uses unspeakable tragedy as an unearned device in a morality play.

Bean plays Vian, an ex-fighter who just served 12 years in jail for the drunken beating death of a man at a party. He’s gone sober in prison, and just wants to get his life back together. It takes some convincing, but his sister Bethley (Kate Walsh) agrees to let him crash on the couch. Between clichéd bits of working out in the backyard, Vi draws closer to his nephew Jimmy (Nolan Gross), a character who seems to have leapt into the movie from “Family Guy” or a “Funny or Die” spoof of such things. The wide-eyed naif loves “Old Man and the Sea”, talks about black holes, gets bullied, and says things like, “Why do you think God had grandma and grandpa die in a car crash?” To say he’s an unrealistic character clearly inserted into the film as a plot device would be an understatement, although it’s the fault of Branaman not the young Gross, who gives his all to this cartoonish creation.

Vian gets a job at a pizza joint run by Roland (Tom Arnold), and the two quickly become close friends. He even meets a girl named Jolene (Eva Longoria) at the local grocery store, and, of course, fails to tell her he’s an ex-con and claims he’s a high-level chef. Roland meets Vian’s sister, and it looks like the two of them might form a relationship, but Vian has an old-fashioned, inexplicable, against-his-character Stay Away From My Sister reaction. Why? The plot says so. And then Branaman drops all pretense of character drama in the final act, pushing the film’s melodrama and religious message to the forefront. Lest anyone think “Any Day” is problematic because it suggests the importance of faith and belief in a higher power, let me make it clear that this is not the case. It is because it does so ineptly.

The tonal problems start early. Vian is so “aw shucks” nice to everyone around him that Bethley’s protestations make her come off as cruel. He has a polite conversation with Jolene on their first meeting and Bethley just berates him. It’s a weird dynamic that, like a lot of “Any Day”, feels like a screenwriting idea that was never developed. Worst of all, the structure of “Any Day” demands that something must happen to test Vian’s sobriety and non-violence. So we wait for it. And wait. And we get bored because Branaman is defiantly uninterested in these characters. Everyone we meet is merely set-up for the final act. And so characters do and say things that don’t feel organic in the slightest. They are all devices for the “message” of the film, which does a disservice for audiences looking for better faith-based films, ones in which religion is correctly portrayed as an essential part of real lives instead of fabricated mouthpieces. “Any Day” goes from boring to manipulative, and I’m not sure which is worse.

Finally, there’s something really weird going on with the film’s language and rating. It’s almost as if they decided halfway through that they needed to get a PG to hit the faith-based audience that the movie needs to succeed. And so the entire piece is dubbed like a network TV version of a feature film. Vian twice says “sham” when the character clearly said “shit” and people in “Any Day” say “freak” way more often than in normal life. I mention it because it’s bizarre but also because it’s not hard to believe that this is a project that wasn’t exactly planned out before they started filming. Trust me. You don’t need this sham. 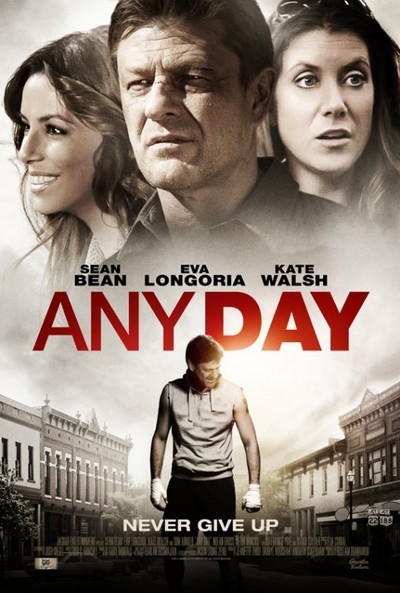