“Antlers” is a film about darkness. Human darkness. Supernatural darkness. Literal, low-lit filmmaking darkness. It is a slimy, icky, violent film that doesn’t always come together but it also undeniably feels like it has emerged from the passions of its creators, particularly director Scott Cooper and producer Guillermo del Toro. Like other works of the former, it centers people on the economic fringe who carry heavy emotional weights. Like other works of the latter, it imagines a world wherein real pain can open doors to unimaginable horror. (One can also easily trace some of the themes of previous work by co-writer Nick Antosca to this project as well, for all you "Channel Zero" fans.) Trauma, grief, abuse, addiction—these are not new themes to the genre and those quick to write off the trend of “elevated horror” will find plenty to criticize here, but they’d also be writing off this film's impressive craft, committed ensemble, and notable ambition. "Antlers" may fall short of its potential, but I suspect it will find a fan base over the years.

It feels like it’s been years since we first heard about Cooper's film, which was scheduled for an April 2020 release and is finally coming out 18 months later. Based on Antosca’s short story The Quiet Boy, "Antlers" takes place in a small town in Oregon, one of those formerly blue-collar communities that has been devastated by economic setbacks and drug addiction. Paul Meadows (Jesse Plemons) is the reticent sheriff of this corner of the world, a place that feels like it was thriving a generation ago and might not exist a generation from now. Paul’s sister Julia (Keri Russell) has returned home to a place that already provoked trauma related to her childhood and now seems like perhaps the gloomiest town on Earth.

Julia has also returned to a teaching job, where she takes an interest in the quiet kid in class, Lucas (Jeremy T. Thomas). He’s one of those boys that seems a little too quiet and skittish, indicating perhaps something is very wrong at home. Julia learns that Lucas’ mother passed not long ago, leaving his father Frank (Scott Haze) to care for him and Lucas’ brother Aiden (Sawyer Jones). Everyone suspects this is a bad home dynamic, but they have no idea. In the very effective, tone-setting opening scene, Frank and a drug-producing colleague are attacked by ... something. Since then, he’s been locked in his house, physically coming apart at the seams. He’s almost feral, a cross between a werewolf and a zombie, and Lucas just locks his door at night and hopes dad doesn’t get worse. He will get worse.

Shot by Florian Hoffmeister (a Terence Davies collaborator on “The Deep Blue Sea” and “A Quiet Passion” as well as a vet of AMC’s “The Terror,” which has a similar tone to this project), “Antlers” is a visually confident film. It embraces shadows in a way that makes you lean forward to discern the horror in the dark corner of the room but never to a degree that feels incoherent or frustrating. Cooper and Hoffmeister give the film a striking visual language, and the editing by the great Dylan Tichenor (“There Will Be Blood”) enhances the forced POVs and disconcerting angles even further.

If there’s a weakness to “Antlers,” it’s just how much the script seems willing to underline those themes instead of the characters involved. We never really get to know any of these people and supporting roles played by talented actors like Amy Madigan and Graham Greene feel particularly underdeveloped. Russell and Plemons do a great deal of heavy lifting to make their roles feel more three-dimensional but they’re both so talented that one wishes there was a bit more meat for them to chew on. It’s also a film that can feel monotonous in its deadly serious tone. A bit of humor to break up the child torture might have helped balance it out.

Only in theaters on October 29th. 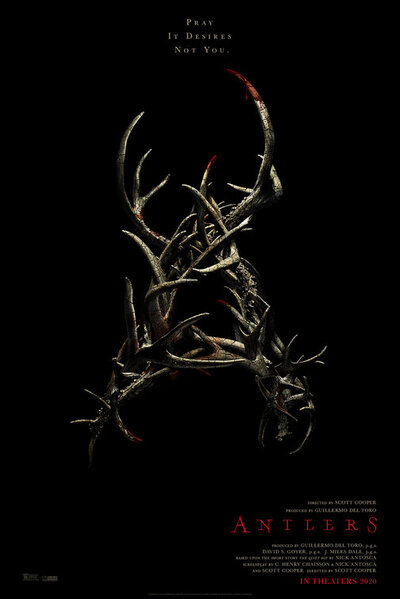 Rated R for violence including gruesome images, and for language.

Writer (based on the short story "The Quiet Boy" by)